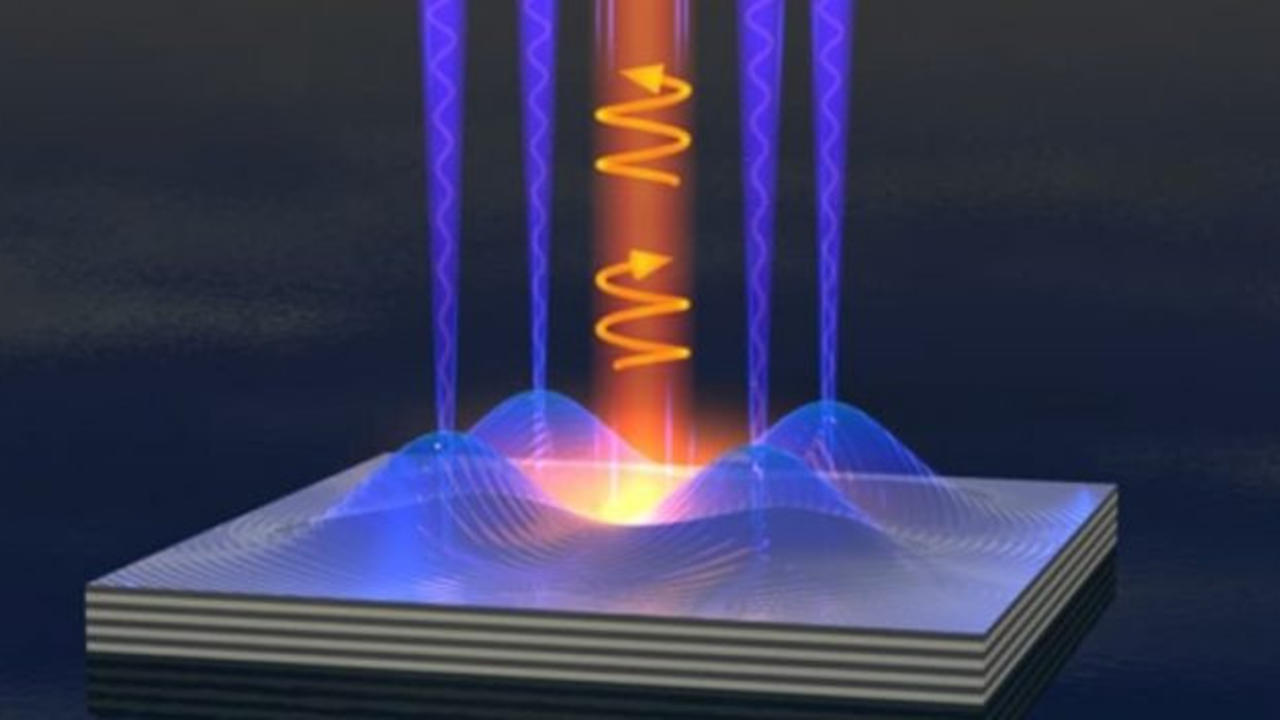 When we think about liquids, we think about one of the four known states of matter: gas, liquid, solid and plasma (charged or ionized gas). Light being mass-less, the words liquid and light put together seems at first like an oxymoron. But not so long ago, in 2013, a theorized similar situation predicted in 2007 and called “photonic molecule” was made artificially. In these experiments, photons – quantum of electromagnetic fields, which have no rest mass and travel at the speed of light in vacuum – bind together so strongly, they behave as molecules, and so acting as if they had mass.

Another case concerning light which reproduces the physics of molecules, consists of photons confined to two or more coupled micro-optical cavities, since it reproduces the behavior of interacting atomic energy levels. For this reason, it has also been termed photonic molecule, which is an alternative – but not equivalent – definition to the first.

A micrometer-sized piece of semiconductor can trap photons inside it in such a way that they act like electrons in an atom. The result of such a close relationship is a “photonic molecule,” whose optical modes bear a strong resemblance to the electronic states of a diatomic molecule like hydrogen. Photonic molecules, named by analogy with chemical molecules, are clusters of closely located electromagnetically interacting microcavities or “photonic atoms”. Optically coupled microcavities have emerged as photonic structures with promising properties for investigation of fundamental science as well as for applications. – Wikipedia

A third case concerning light, but this time interacting with matter, is that of photons interacting with electron-hole pairs – called excitons – in a semiconductor. These excitons impose a dipole moment, which combined with the dipole of the electromagnetic field, couples strongly the excitons and the photons. The final result is a polariton, considered a quasiparticle composed of half-light and half matter, which behaves as a Bose Einstein condensate or superfluid, even at room temperature. This case is referred to as Liquid light.

Liquid light was formerly achieved only at a cryogenic temperature, in the absence of polaritons. In order for superfluidity to occur at room temperature, polaritons must be present, and so the experimental setup is more complex. The video below explains the Liquid light phenomena for the case mentioned:

Multiple polaritons confined in the same place induce condensation into a light-matter fluid; a Bose Einstein condensate or superfluid that emits light with clockwise or counterclockwise spin. The spin can switch direction controlling the electric field induced within. It is this polariton fluid’s light emission spinning up or down that serves as a spin encoded light binary code that could be sent through the optical fibers carrying data as optical signals and translating information from the electrical regime into the optical regime. For this reason, the Liquid Light is being thought of as a tool for information transfer beyond Moore´s law.

The extraordinary observation in our work is that we have demonstrated that superfluidity can also occur at room-temperature, under ambient conditions, using light-matter particles called polaritons.
– Daniele Sanvitto, lead researcher, CNR NANOTEC Institute of Nanotechnology, Italy

Superfluidity is a phenomenon assigned to Bose Einstein condensates, occurring mainly in particles capable of forming cooper pairs, like electrons do. In our view, space itself presents such superfluidity, as the Planck spherical Unit (PSU) – which is not to be confused with a unit of measure; a PSU is the pixel of space itself. The Planck Oscillator or PSU is a quantum oscillator at the Planck frequency of the electromagnetic field, i.e., a bosonic particle.

These PSU units compose matter as well, following the holofractograpic principle of Haramein´s theory, which predicts the radius of the proton with one standard deviation from experiments and with no adjusting parameters, while the standard model is off by 7 standard deviations, roughly 4% bigger radius than the latest reported proton radius. An extension of the standard model, called superfluid vacuum theory (SVT) – or Bose Einstein Condensate (BEC) Vacuum Theory – also considers vacuum as a superfluid or Bose Einstein condensate.