Mitochondria are most well known as the energy producing organelles of the cell, producing chemical energy via ATP production in all Eukaryotic species. However, mitochondria have a much broader role than simple centers of energy production in the cell and play critical roles in a range of processes from controlling cell fate via programmed cell death (called apoptosis)—central to tissue morphogenesis and anti-tumorigenic regulation— to regulating gene expression (via modulating metabolite concentrations like cyclic AMP), to name but a few of the multitudinous cellular processes involving this dynamic organelle.

Because of the ancestral nature as an endosymbiont, mitochondria are extremely active within cells and are even described as exhibiting social behaviors [1]—indicating high levels of complex information processing with intercommunication and coordination of activity [2]— so much so that the sociality of mitochondria determines behavioral and functional outcomes within and between tissues, affecting all aspects of health and vitality. An especially salient example of this is the direct effect of mitochondrial intercellular networks in the brain— having direct effects and regulation of behavior and cognition [3].

In our research here at the Resonance Science Foundation into cellular biophysics, one of the functional roles we proposed for mitochondria within the cell is the generation of highly coherent light (bio-lasing, coupling functionality with the quantized electromagnetic field) and the channeling of such coherent photons, giving mitochondria properties of optical resonators / waveguides within and between cells. Now, a study published in the journal of Science Advances has directly observed and characterized such light-guide functions of mitochondria [4], pointing the way towards verification of a key postulate in our research into mitochondria and the biophysics of the cell:

This quantum optical coherence will result in bio-lasing, or laser-like transmission of coherent photons… where the mitochondria act as optical waveguides facilitating the transmission of photons. The photons, when absorbed, will modulate the electronic properties of biomolecules, resulting in a direct functional effect. As well coherent interference of cytoplasmic sources will result in holographic information processing; where holographic interference patterns can be stored in the phosphate bilayers of membranes over short time periods, or hard-wired into microtubules and actin filaments. We refer to this as the cellular holographic information processing network. In addition to being a possibly significant source of optical-based coherent information signaling and holographic memory storage… [5]

The study, performed by researchers at the National Eye Institute (NEI, a part of the National Institute of Health) and headed by lead investigator Wei Li, found that mitochondria in the photoreceptors of the retina have a dual role, generating energy for the energy-intense process of photo-transduction (sending electrical signals generated by photons to the brain), and a direct optical processing role functioning as veritable microlenses. Previously, the positioning of the mitochondria in the cone photoreceptor cells was baffling to researchers as the mitochondria formed tight bundles over the photoreception centers, which would seem to scatter and block incoming photons. However, far from scattering light, the study directly observed mitochondrial bundles acting as optical waveguides, focusing the light and facilitating its transport to the photoreceptor segments of the retina’s cone cells. 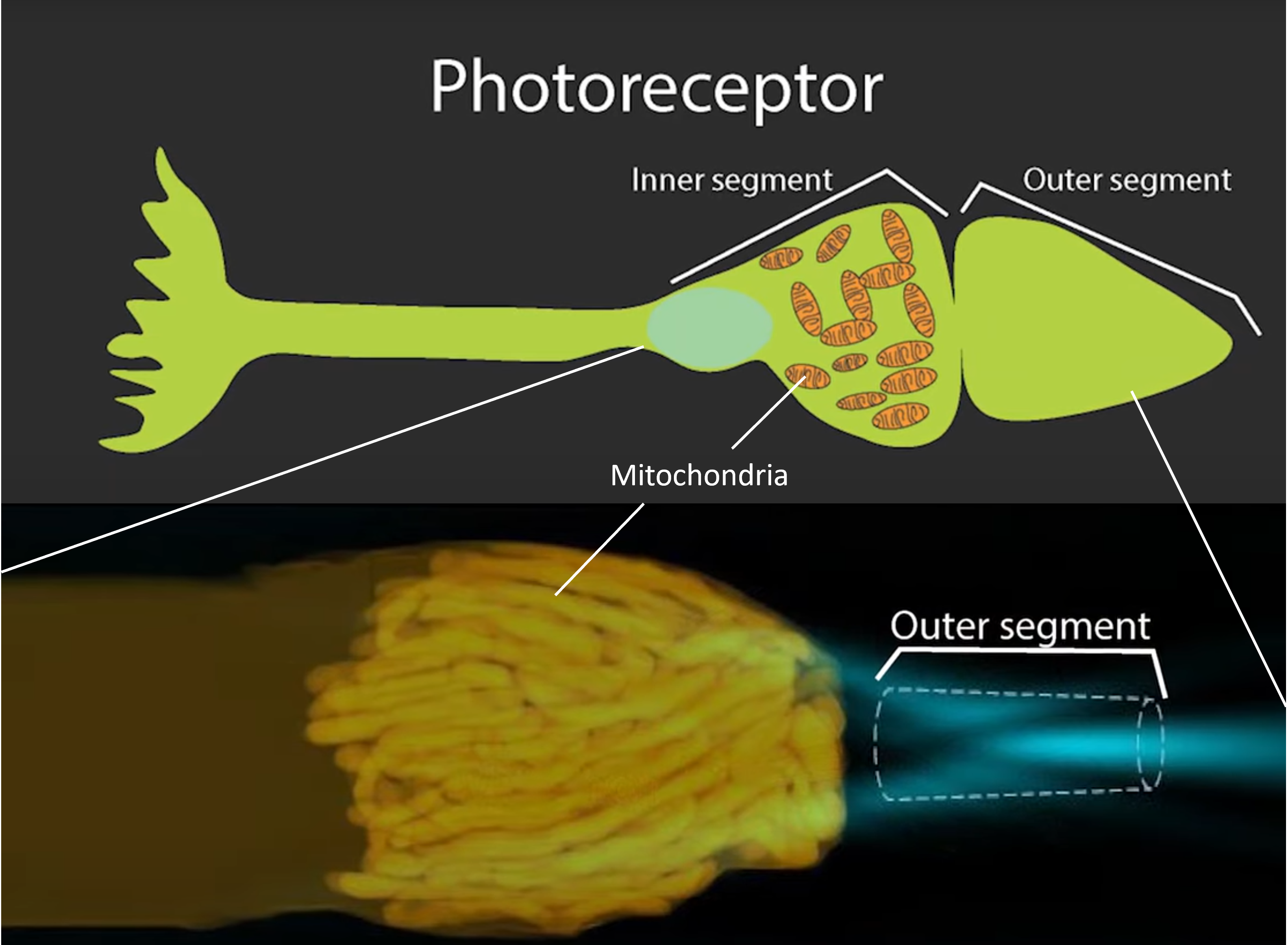 Top image, schematic representation of a photoreceptor cone cell of the retina, showing the approximate location of mitochondrial bundles over the outer segment, where the photoreception and transduction takes place. The bottom image is a live microscope image of the mitochondria in real time, each mammalian cone photoreceptor may effectively have its own mitochondria-derived microlens.

The study is a resolute confirmation of the optical properties of mitochondria and their role in channeling and directing light in highly controlled functional capacities— as we described them in our study, functioning as optical waveguides for coherent stimulated light emission within the cell. Further experiments and research will be needed to ascertain if this optical role of mitochondria occurs more generally in other tissue-types beyond cells of the retina. The study from Wei Li at the NEI and the new insights into the optical role of cone mitochondria will have immediate clinical implications as the methodology can be employed to identify mitochondria-specific deficits within photoreceptor optics that leads to macular degenerative pathologies and retinal diseases.