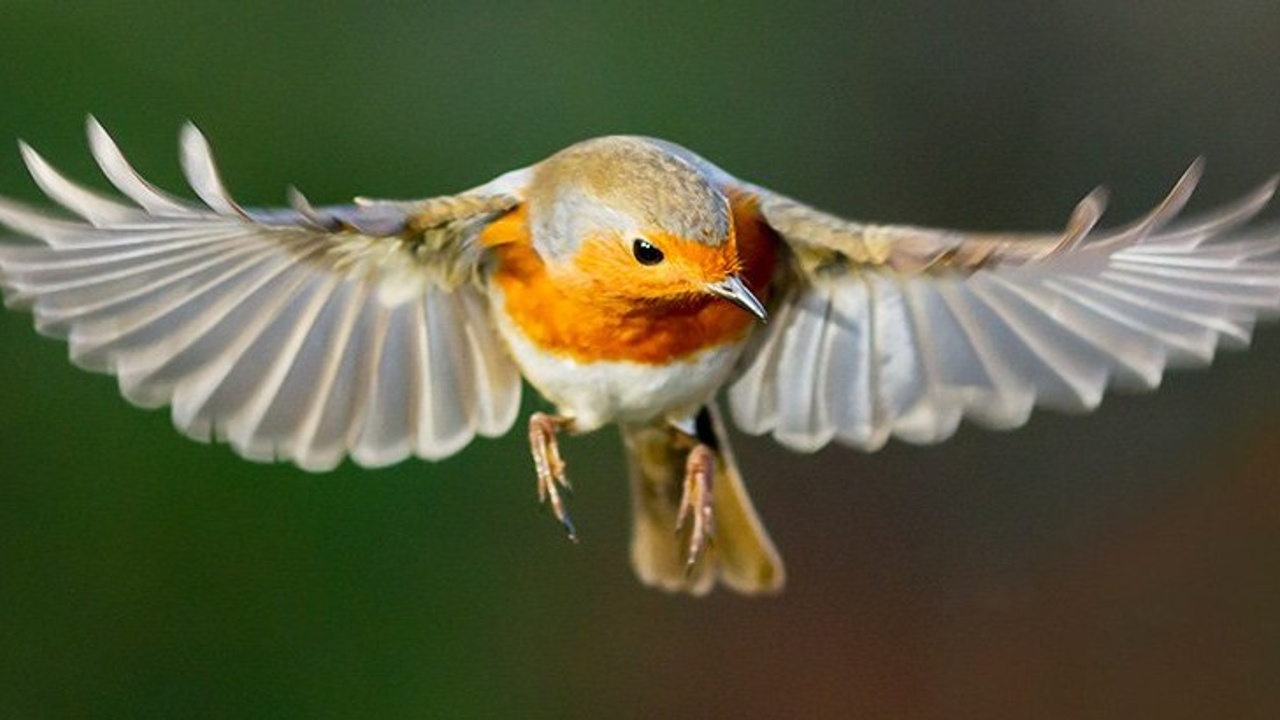 Birds Can See Earth's Magnetic Fields, And We Finally Know How That's Possible

The mystery behind how birds navigate might finally be solved: it's not the iron in their beaks providing a magnetic compass, but a newly discovered protein in their eyes that lets them "see" Earth's magnetic fields.

These findings come courtesy of two new papers - one studying robins, the other zebra finches.

The fancy eye protein is called Cry4, and it's part of a class of proteins called cryptochromes - photoreceptors sensitive to blue light, found in both plants and animals. These proteins play a role in regulating circadian rhythms.

There's also been evidence in recent years that, in birds, the cryptochromes in their eyes are responsible for their ability to orient themselves by detecting magnetic fields, a sense called magnetoreception.

We know that birds can only sense magnetic fields if certain wavelengths of light are available - specifically, studies have shown that avian magnetoreception seems dependent on blue light.

This seems to confirm that the mechanism is a visual one, based in the cryptochromes, which may be able to detect the fields because of quantum coherence.

The Lund team measured gene expression of three cryptochromes, Cry1, Cry2 and Cry4, in the brains, muscles and eyes of zebra finches. Their hypothesis was that the cryptochromes associated with magnetoreception should maintain constant reception over the circadian day.

They found that, as expected for circadian clock genes, Cry1 and Cry2 fluctuated daily - but Cry4 expressed at constant levels, making it the most likely candidate for magnetoreception.

This finding was supported by the robin study, which found the same thing.

But they made a couple of other interesting findings, too. The first is that Cry4 is clustered in a region of the retina that receives a lot of light - which makes sense for light-dependent magnetoreception.

The other is that European robins have increased Cry4 expression during the migratory season, compared to non-migratory chickens.

Both sets of researchers caution that more research is needed before Cry4 can be declared the protein responsible for magnetoreception.

The evidence is strong, but it's not definitive, and both Cry1 and Cry2 have also been implicated in magnetoreception, the former in garden warblers and the latter in fruit flies.

Observing birds with non-functioning Cry4 could help confirm the role it seems to play, while other studies will be needed to figure Cry1's role. 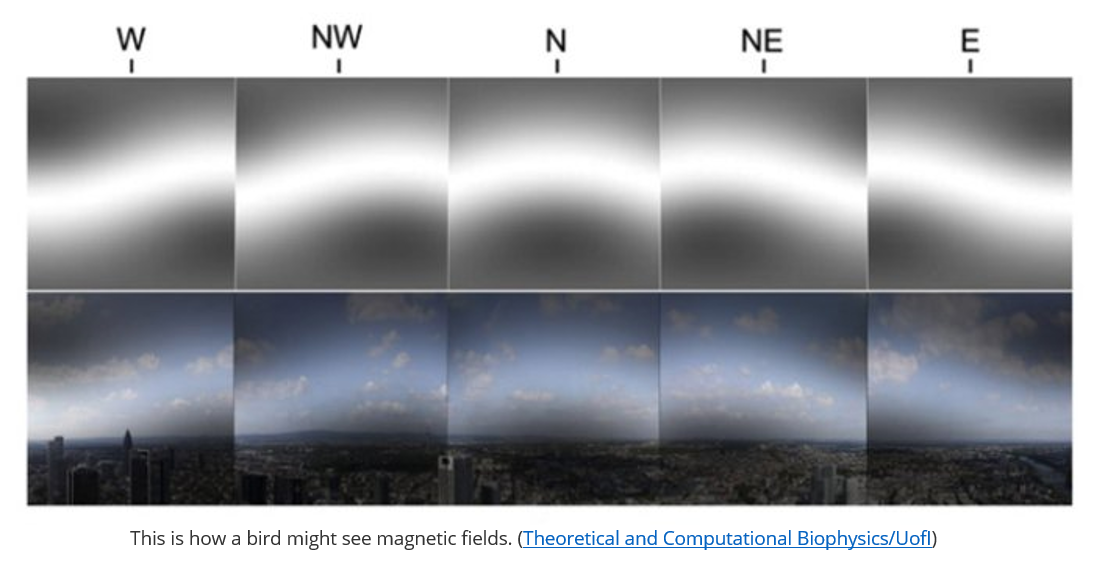 So, what does a bird actually see? Well, we can't ever know what the world looks like through another species' eyes, but we can take a very strong guess.

According to researchers at the Theoretical and Computational Biophysics group at the University of Illinois at Urbana-Champaign, whose researcher Klaus Schulten first predicted magnetoreceptive cryptochromes in 1978, they could provide a magnetic field "filter" over the bird's field of view - like in the picture above.

The body’s hidden compass—what is it, and how does it work?

That many animals sense and respond to Earth’s magnetic field is no longer in doubt, and people, too, may have a magnetic sense. But how this sixth sense might work remains a mystery. Some researchers say it relies on an iron mineral, magnetite; others invoke a protein in the retina called cryptochrome.

Magnetite has turned up in bird beaks and fish noses and even in the human brain, as Joe Kirschvink of the California Institute for Technology in Pasadena reported in 1992, and it is extremely sensitive to magnetic fields. As a result, Kirschvink and other fans say, it can tell an animal not only which way it is heading (compass sense) but also where it is. “A compass cannot explain how a sea turtle can migrate all the way around the ocean and return to the same specific stretch of beach where it started out,” says neurobiologist Kenneth Lohmann of the University of North Carolina, Chapel Hill. A compass sense is enough for an animal to figure out latitude, based on changes in the inclination of magnetic field lines (flat at the equator, plunging into the earth at the poles). But longitude requires detecting subtle variations in field strength from place to place—an extra map or signpost sense that magnetite could supply, Lohmann says.

Except in bacteria, however, no one has seen magnetite crystals serving as a magnetic sensor. The crystals could be something else—say, waste products of iron metabolism, or a way for the body to sequester carcinogenic heavy metals. In the early 2000s, scientists found magnetite-bearing cells in the beaks of pigeons. But a follow-up study found that the supposed magnetoreceptors were in fact scavenger immune cells that had nothing to do with the neural system. And because there is no unique stain or marker for magnetite, false sightings are easy to make.

Making sense of it all

Cryptochrome, too, offers much to like. When short-wavelength light strikes it, it becomes what chemists call a “radical pair”: a molecule containing two unpaired electrons whose spins can be either aligned or not. A magnetic field can flip the spins back and forth between aligned and nonaligned states, changing the chemical behavior of the molecule. In 1978, Klaus Schulten, a physicist at the University of Illinois, Urbana-Champaign, had suggested that animals could use radical-pair reactions for magnetoreception. But he didn’t have a molecule that could support those reactions until the late 1990s, when researchers discovered cryptochrome serving as a light sensor in mammalian retinas. Most researchers focused on cryptochrome’s control over circadian clocks, but Schulten knew that the molecule could form a radical pair. “This was my day,” Schulten says. “Finally now I had a really good candidate.” In 2000, he published a study showing how magnetic fields could influence cryptochrome reactions to create light and dark patches in the visual fields of birds.

A retinal cryptochrome sensor could explain why blue or green light appears to activate birds’ compasses but red light jams them, or why birds seem to tell north from south by measuring changes in the field’s inclination instead of reading the magnetic field directly (Crypto-chrome can’t “feel” magnetic polarity)…

So, who’s right? It doesn’t have to be either-or, says Peter Hore, a physical chemist at the University of Oxford in the United Kingdom who likes the idea that nature evolved two different magnetoreception systems. “The map sense could be magnetite, the compass sense could be radical pairs,” he says. It would be the best of both worlds—or at least the best way to navigate this one.

Article: Body's hidden compass, what it is and how does it work