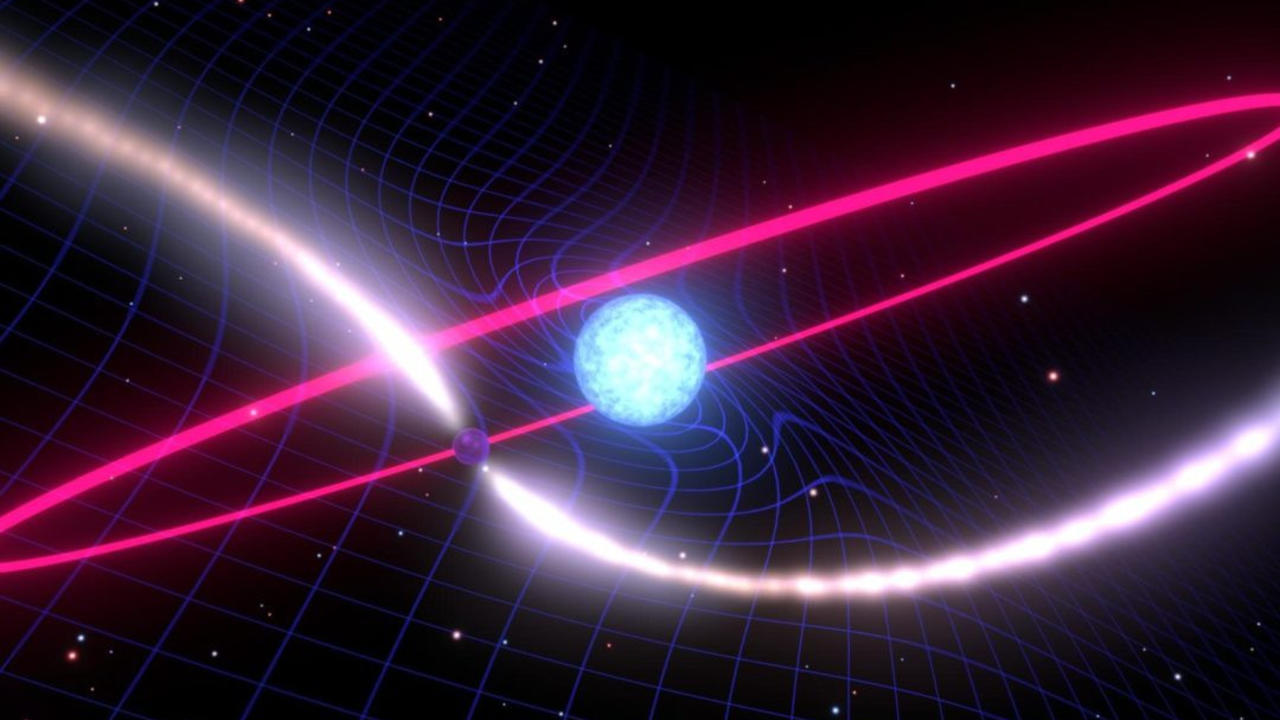 A few years later, in 1918, Austrian physicists Josef Lense and Hans Thirring predicted that the dragging of spacetime due to a rotating celestial body – frame-dragging – would force a nearby orbiting body into precession. That is, the closer you are to the rotating body, the more you are pulled around with it – which for another rotating body forces its axis of rotation to continuously change direction with the changing pull along the orbit. This effect is now known as Lense-Thirring precession.

At high speeds, a gyroscope exhibits extraordinary stability and maintains the direction of the high-speed rotation axis. Angular momentum is thus conserved as long as there is no external torque. However, in the presence of external forces, the gyroscope will experience precession due to torque, where the torque produces a change in angular momentum – but only in direction, not magnitude. In 1960, Schiff showed that an ideal gyroscope in orbit about the Earth would undergo relativistic precessions due to frame-dragging. As the frame-dragging effect is analogous to the way in which a rotating electrically charged body generates magnetism, it is also referred to as the “gravitomagnetic effect.”

In 2004, this effect was measured in the Gravity Probe B experiment, which consisted of a satellite containing four gyroscopes in polar orbit about the earth. The gravitomagnetic precession rate was measured and the frame-dragging drift rate was found to be in good agreement with the theoretical prediction, thus validating the effects of gravitomagnetism and the dependence on the angular velocity of the rotating body.

Now a team of scientists have taken it one step further and for the first time measured these effects in a natural gyroscope – the binary pulsar system PSR J1141–6545. Located 10,000 light years from Earth, this system consists of a 20-km diameter neutron star in a 5-hour orbit with a fast-rotating white dwarf. The neutron star is highly magnetised and thus emits beams of electromagnetic radiation out of its magnetic poles. This radiation is only observed when it is pointing towards Earth, which is what gives it its pulsed appearance and hence why we then call it a pulsar. It was one of these pulses that Australian astrophysicist Professor Matthew Bailes first detected nearly 20 years ago and has been tracking it ever since.

With almost two decades of data, the team was able to do a detailed temporal analysis of the pulse timing. Their analysis revealed the changing geometry and state of the system where they found that the orientation of the plane of the orbit of the pulsar exhibited precession. This precession was concluded to be due to the frame-dragging effects of the fast-rotating white dwarf, making this the first demonstration of frame-dragging measured in any astrophysical setting.

In a universe where space is not empty and instead full of energy – like a superfluid – then the effects of frame dragging is an extremely important process to consider. Not only can these effects reveal information about the spin rate of the system, it can also reveal information about the boundary conditions defining the extended system – such as a super massive black hole and the spiral arms of its host galaxy. Now that this measurement has been demonstrated in an astrophysical system, this can hopefully lead the way for all such rotating systems.