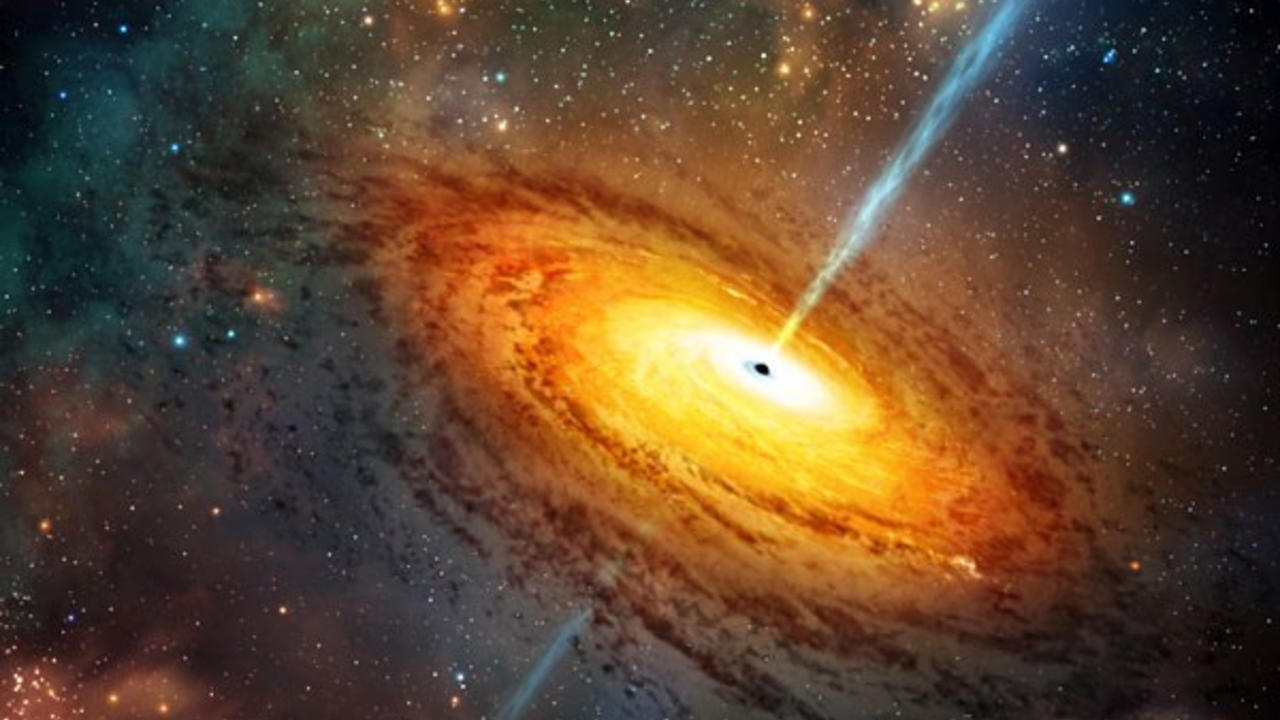 The super-anatomy of these central galactic black holes are as intriguing as the enigmatic beacons they form in the deep field of space. Although all major galaxies probably have a supermassive black hole at the central region, as this is the structure that initiates galaxy formation in the first place, active galactic nuclei are thought to represent a different early phase of this process when the super massive black holes were extremely active, emitting large amounts of energy (and probably matter as well); forming the first galaxies. Additionally, as a consequence of accreting the pre-galactic material, massive amounts of matter were being both gravitated into the central black holes as well as emitted from their poles. The inflowing matter forms an ultra-hot accretion disc around the equatorial region of the black hole, and relativistic jets (charged particles, or electron-positron plasma, moving at relativistic speeds) stream along the axis of rotation and can extend up to hundreds of thousands of light years.

"The implied alignment of the spin axes of massive black holes that give rise [to] the radio jets suggest the presence of large-scale spatial coherence in angular momentum” – A. Taylor & P. Jagannathan

These extremely energetic and massive structures are readily identified when viewing deep space images collected in the radio wave band of the electromagnetic spectrum. The scale of observation is grand: gathering light from numerous galaxies across several million parsecs of space. Equally, the instrumentation used to gather light from such distant and vast sources is colossal. Think of the Arecibo Radio Telescope, featured in such films as Contact, to get an idea of how massive these telescopes can be.

One such telescope under proposal is the Square Kilometer Array, which will be one of the largest scientific observational instruments ever constructed, as the “lens” of the telescope is essentially a square kilometer in area. This telescope, when completed, will be contributory in determining fundamental cosmological parameters and probing the earliest epochs of galaxy formation. 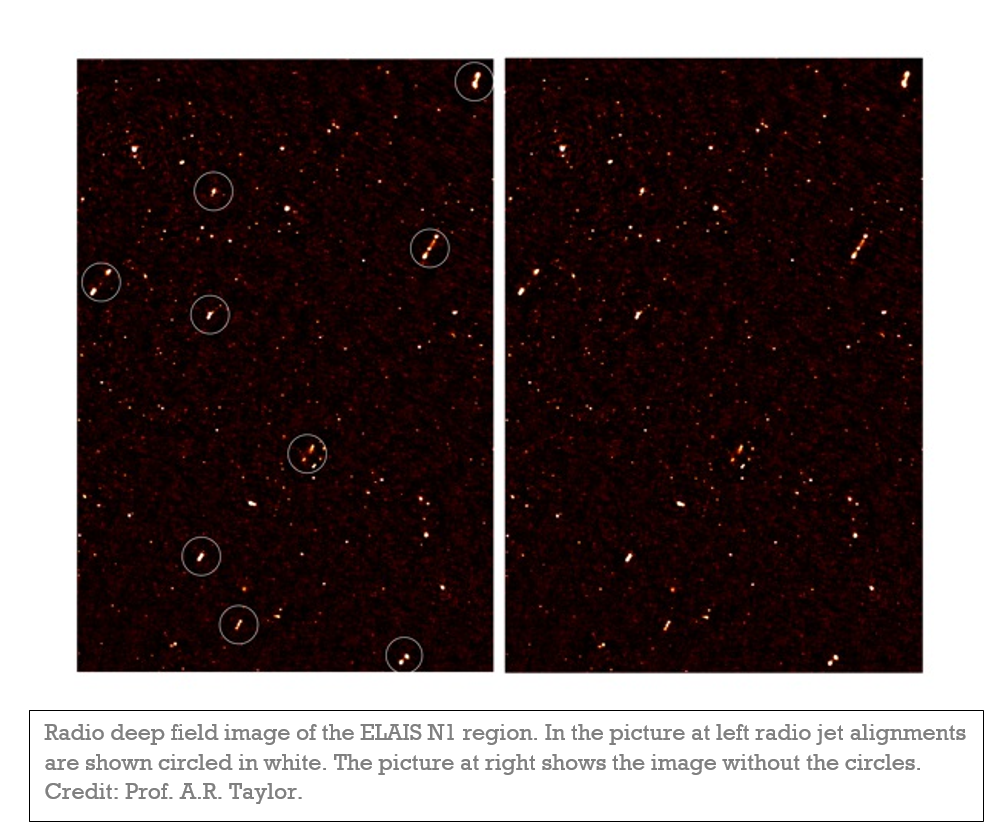 In a recent study using the Giant Meterwave Radio Telescope, South African astronomers made a remarkable discovery when analyzing the alignment of the spin axis of 64 galaxies.

The orientation of the axis of rotation of active galactic nuclei are directly observable because of the long plasma jets streaming from the poles of the central supermassive black hole, with strong electromagnetic emissions in the radio frequency range. Reported in the Monthly Notices of the Royal Astronomical Society, the astrophysicist team analyzed the orientation of the radio jet position angles and found that a surprisingly large number of supermassive black holes were aligned with their axes of spin.

Statistical analysis revealed that there was a 0.1% probability of such an alignment occurring by chance – strongly indicating that there is some as yet unseen force that is producing strong coherence among cosmological-scale objects. Moreover, this may imply that conditions during the earliest epochs of galactic formation deviate from complete isotropy, referring to the uniformity of the distribution of matter.

It has long been presumed that the universe is homogeneous and isotropic (the same in all locations) with no identifiable axis or orientation. Indeed, this is known as the cosmological principle. Yet, one of the 20th century’s greatest minds, Kurt Gödel, provided an exact solution of the Einstein field equations that described a rotating universe. In commentary about Gödel’s work, physicist Stephen Hawking said:

"These models could well be a reasonable description of the universe that we observe, however observational data are compatible only with a very low rate of rotation. The quality of these observations improved continually up until Gödel's death, and he would always ask "is the universe rotating yet?" and be told "no, it isn't."

In more recent events, there have been several findings that suggest that the universe is indeed not entirely homogenous and isotropic. Such examples come from the so called axis of evil identified during an analysis of the microwave background radiation, dark flow, Shamir’s report on the Sloan Digital Sky Survey showing that left-twisted galaxies were much more common than right-swirling galaxies; as well as structural mapping such as the BOSS Great Wall and Laniakea. 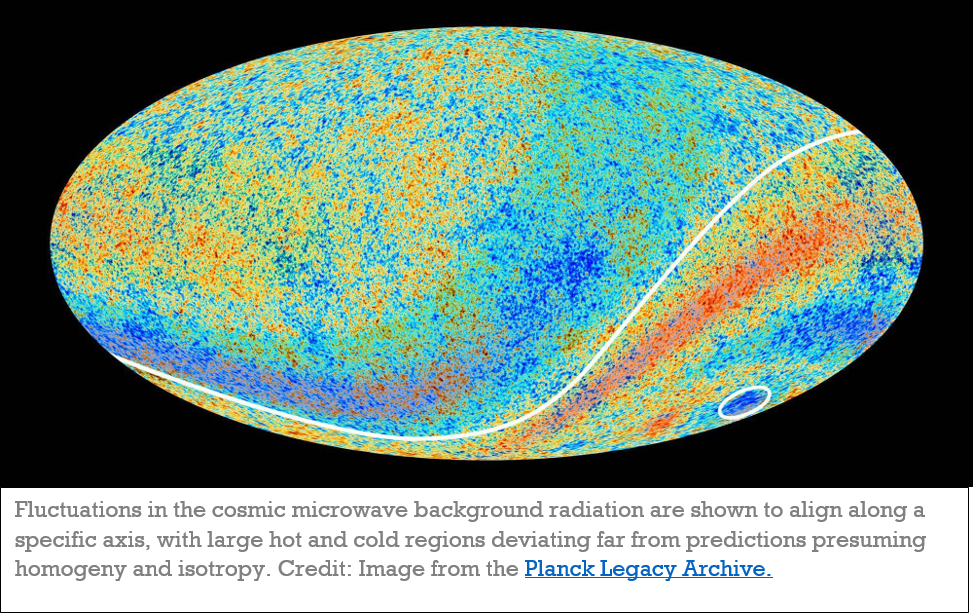 While the strong correlation of spin alignment of multiple super massive black holes across cosmological distances may seem puzzling -- since under standard presumptions there should be very little to no interaction of galactic nuclei across such vast distances -- Haramein has long described the dynamics and properties of spacetime that would naturally produce such correlated orientation and entanglement of objects that has been observed in this latest study.

Haramein has explained the structural and geometric properties of space and matter from the smallest to the largest scale, and it is in consideration of the largest scale structure, the universe itself, that we gleam an understanding of how and why these vast arrays of galaxies are uniformly aligned in their axis of rotation. Namely, just as we have seen from indications of the “axis of evil”, “dark flow”, the great wall and great voids, the universe is not isotropic, but instead has a definite orientation.

Haramein has identified this large-scale structure as a double-toroidal counter-rotating geometry. Thus, not only are phenomena like “dark flow” and seeming accelerated expansion of space observed, but just as in the most recent discovery: strong alignment of galaxies as well. The reason for this – the uniform spin of the universe, which has a strong correlating (entangling) effect on the objects that are uniformly effected by the Coriolis forces of the spinning structure. Spin dynamics naturally produce strong coherence.

From this profound theory, we see that spin is not the result of matter accretion in the early universe, but instead it is the intrinsic spin and high curvature of spacetime that engenders gravitational accretion of matter into the structures that are observed. Since spin “came first”, we would expect there to be a remarkably high degree of correlation of the spin axes of primordial active galactic nuclei.In the paper The Origin of Spin: A Consideration of Torque and Coriolis Forces in Einstein’s Field Equations and Grand Unification Theory, Haramein and Elizabeth Rauscher evaluate the inclusion of torque and Coriolis effects in Einstein’s field equations of spacetime geometry (gravity). The main result of such a consideration is that spin is an intrinsic characteristic of spacetime itself, explaining galactic formations, polar jets, accretion discs, spiral arms, and galactic halos without the need for exotic forms of dark matter constructs. Remarkably, this is an instrumental facet of a Grand Unification Theory as the torque and Coriolis effects of spacetime produce the bodies and particle interactions that are observed at the atomic and hadron scale.

With further consideration, could it be possible that there are additional forces that would allow for the preservation of such strong alignment over time? For instance, it is possible that galactic magnetic field interactions, which have been observed at cosmological scales, could be at play in stabilizing the strong alignment of the polar radio jets of the supermassive black holes and maintaining the anisotropy over long periods of time. Indeed, instrument such as the Square Kilometer Radio Telescope will allow for the study and analysis of galactic magnetic field interactions to see to what degree this can be involved in large-scale galactic interactions.

There is another important interaction however that may be involved in the strong correlation of the spin axes observed in the supermassive black holes, and like the intrinsic spin of spacetime described by Haramein, it is another intriguing spacetime geometrical object. Known technically as Einstein Rosen Bridges (ER bridges) for the two physicist who first described their properties through maximally extended Schwarzschild solutions of Einstein’s field equations, we know them more colloquially as wormholes.

Haramein has long described how the black holes that form the hearts of stellar and galactic objects are connected in a vast spacetime wormhole network. Meaning that black holes will be entangled across vast spatial and temporal distances, much like what has been observed in the radio jet spin alignment.

Interestingly, more recent advances in Unified Physics have equated spacetime wormholes with the phenomenon of quantum entanglement. This is summarized by the statement that Einstein Rosen bridges produce Einstein Rosen Correlations, expressed concisely as ER = EPR. This means that not only does spacetime geometry entangle astronomical-scale black holes, but miniature ones as well (what are referred to as fundamental particles).

What we are observing in this latest study may very well be quantum entanglement at a cosmological scale, as a result of the fluid dynamics of spacetime, linking together the connected universe.

Resources and More to Explore