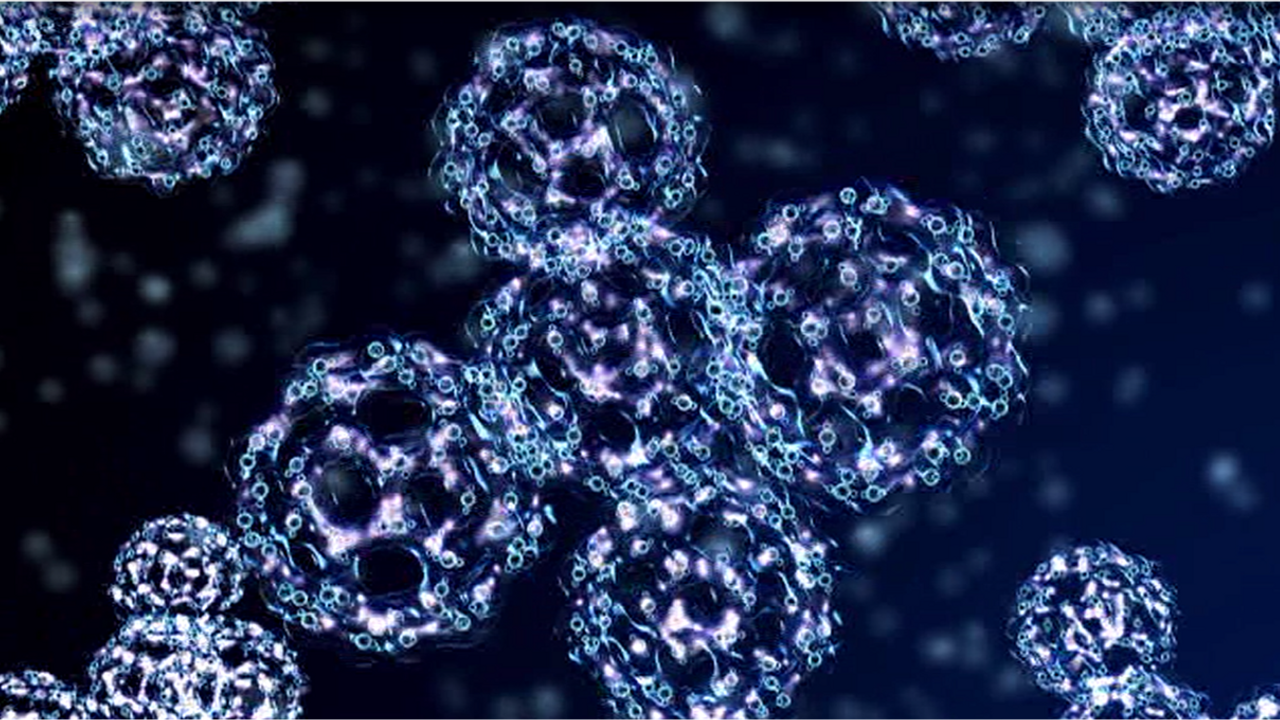 Water is one of the most abundant molecules in the universe, and has a simple chemical composition of two atoms of hydrogen and one atom of oxygen. However, this abundant and seemingly simple molecule underlies astonishing properties arising from the peculiar molecular and intermolecular configurations of water. Starting at the molecular configuration where the hydrogen moieties and unbonded electron pairs of the oxygen atom form a tetrahedral molecule: naively, we might assume that the simplest binding arrangement would be a linear molecule, like carbon dioxide (which as a result does not exist as a liquid and goes straight from a solid to a gas via sublimation), however in a water molecule the hydrogen atoms bind to the single oxygen atom with a specific bond angle of 104.5°. This tetrahedral configuration of the water molecule produces a partial electric-dipole, which makes water ionically interactive and gives it unique properties like being the universal solvent. It also underlies some of the thermodynamic anomalies of liquid water, such as lower density at lower temperatures because of the formation of tetrahedrally coordinated hydrogen bond networks. The liquid water forms intermolecular structured networks such that— unlike almost every other liquid— water expands as it cools, and its solid phase (ice) is less dense than its liquid phase. 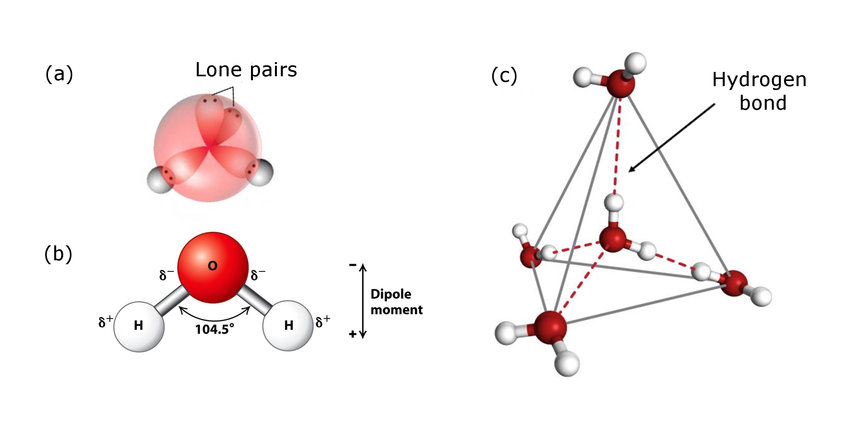 (a) Electronic distribution in water molecule: the tetrahedral structure of the molecular orbitals is shown, with the electrons involved in the covalent bonds and the lone pairs, according to the VSEPR theory [43, 44]. (b) Structure of single water molecule (hydrogen atoms are white, oxygen atom is red) [by Greg Stewart, graphic designer at SLAC National Accelerator Laboratory, USA], represented according to the ball-and-stick model. (c) Tetrahedral arrangement of hydrogenbonded water molecules [Molecular Cell Biology, Sixth Edition c 2008, W.H.Freeman and Company].

These many unique, and seemingly anomalous characteristics of liquid water make it the foundational molecule of life. It functions as the central medium of information exchange and coordinates the activity of vast numbers of complex macromolecules: determining the form and function of proteins, DNA, RNA, lipids, and enabling the biochemistry that is at the foundation of the living system.

Water is necessary both for the evolution of life and its continuance. It possesses particular properties that cannot be found in other materials and that are required for life-giving processes. These properties are brought about by the hydrogen bonded environment particularly evident in liquid water. Each liquid water molecule is involved in about four hydrogen bonds with strengths considerably less than covalent bonds but considerably greater than the natural thermal energy. These hydrogen bonds are roughly tetrahedrally arranged such that when strongly formed the local clustering expands, decreasing the density. Such low density structuring naturally occurs at low and supercooled temperatures and gives rise to many physical and chemical properties that evidence the particular uniqueness of liquid water. If aqueous hydrogen bonds were actually somewhat stronger then water would behave similar to a glass, whereas if they were weaker then water would be a gas and only exist as a liquid at sub-zero temperatures. -Martin Chaplin, Water’s Hydrogen Bond Strength

Considering the importance of this small molecule that does so much, scientists are eager to reveal and understand more of its secrets hidden in its molecular networks. One such study has made a major stride in this endeavor by demonstrating that there is a clear topological distinction between its two supercooled liquid networks, each of different density, a finding that might have far-reaching implications for the understanding of liquid-liquid phase transitions in tetrahedral liquids like water.

The study, published in the journal Nature Physics [1], demonstrates that in deeply supercooled water there is a liquid-liquid phase transition in which an unentangled, low-density inter-molecular network transitions to an entangled, high-density liquid containing topologically complex motifs like trefoil knots and the Hopf link (see image below). 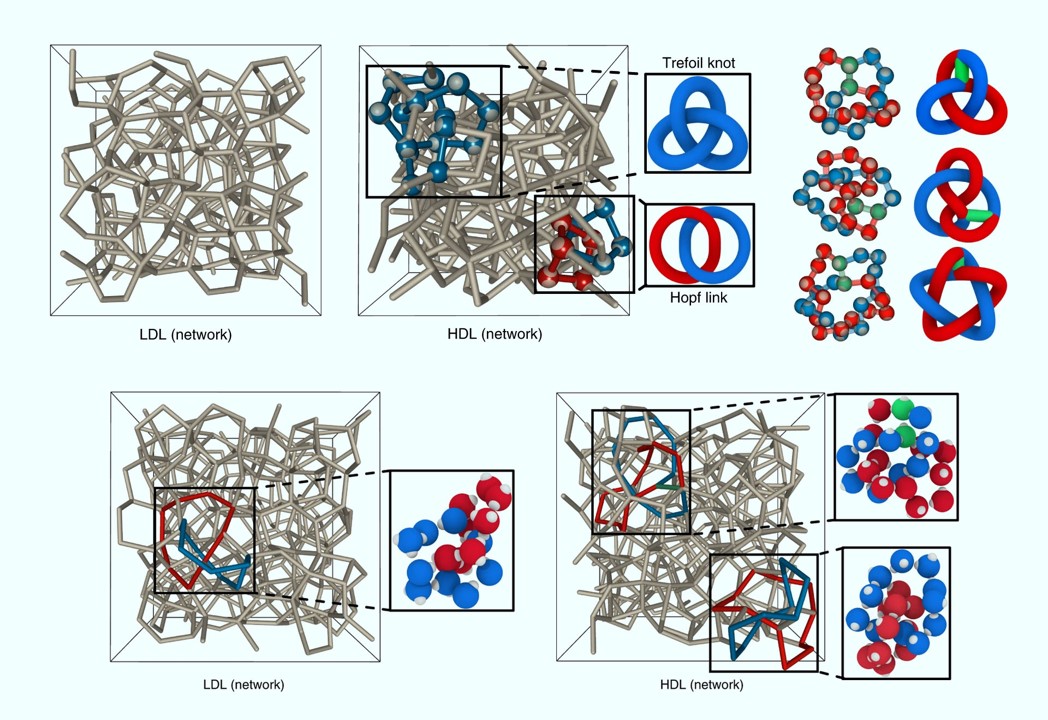 As described in a post by Sapienza Università di Roma, where the research was in-part performed:

The lead author, Andreas Neophytou, a PhD student at the University of Birmingham says that “this insight has provided us with a completely fresh take on what is now a 30-year-old research problem, and will hopefully be just a new beginning.”  The team of researchers first uncovered the topological distinction of the two liquids in a colloidal model of water, and then in two widely used molecular models of water, using computer simulations. Colloids are particles that can be a thousand times larger than a single water molecule. By virtue of their relatively bigger size, and hence slower movements, colloids are often referred to as “big atoms” and used to observe and understand physical phenomena that also occur at the much smaller atomic and molecular length scales. 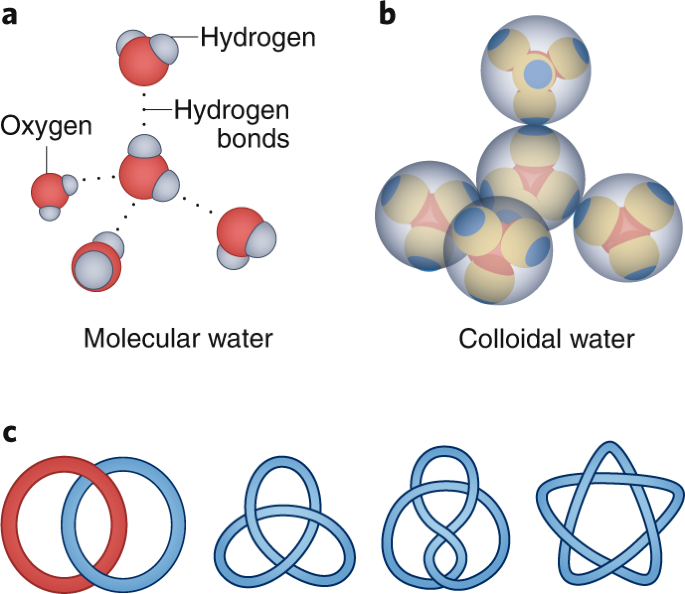 (a) molecular model of water: molecules form tetrahedrally-coordinated hydrogen bond networks. (b) These groupings can be thought of as "large atoms" in the colloidal model of water. (c) In the high-density phase, these networks are entangled and topologically complex, forming motifs such as the trefoil knot, and hopf link.

As well several experts have discussed the importance of the remarkable study:

Pablo Debenedetti, a professor of chemical and biological engineering at Princeton University in the US and a world-leading expert in this area of research, remarks: “This beautiful computational work uncovers the topological basis underlying the existence of different liquid phases in the same network-forming substance.” He adds: “In so doing, it substantially enriches and deepens our understanding of a phenomenon that abundant experimental and computational evidence increasingly suggests is central to the physics of that most important of liquids: water.”  Christian Micheletti, a professor at International School for Advanced Studies in Trieste, Italy, whose current research interest lies in understanding the impact of entanglement, especially knots and links, on the static, kinetics and functionality of biopolymers, remarks: “With this single paper, Neophytou et al. made several breakthroughs that will be consequential across diverse scientific areas. First, their elegant and experimentally amenable colloidal model for water opens entirely new perspectives for large-scale studies of liquids. Beyond this, they give very strong evidence that phase transitions that may be elusive to traditional analysis of the local structure of liquids are instead readily picked up by tracking the knots and links in the bond network of the liquid. The idea of searching for such intricacies in the somewhat abstract space of pathways running along transient molecular bonds is a very powerful one, and I expect it will be widely adopted to study complex molecular systems.” (https://www.phys.uniroma1.it/fisica/archivionotizie/topological-nature-liquid-liquid-phase-transition-tetrahedral-liquids)