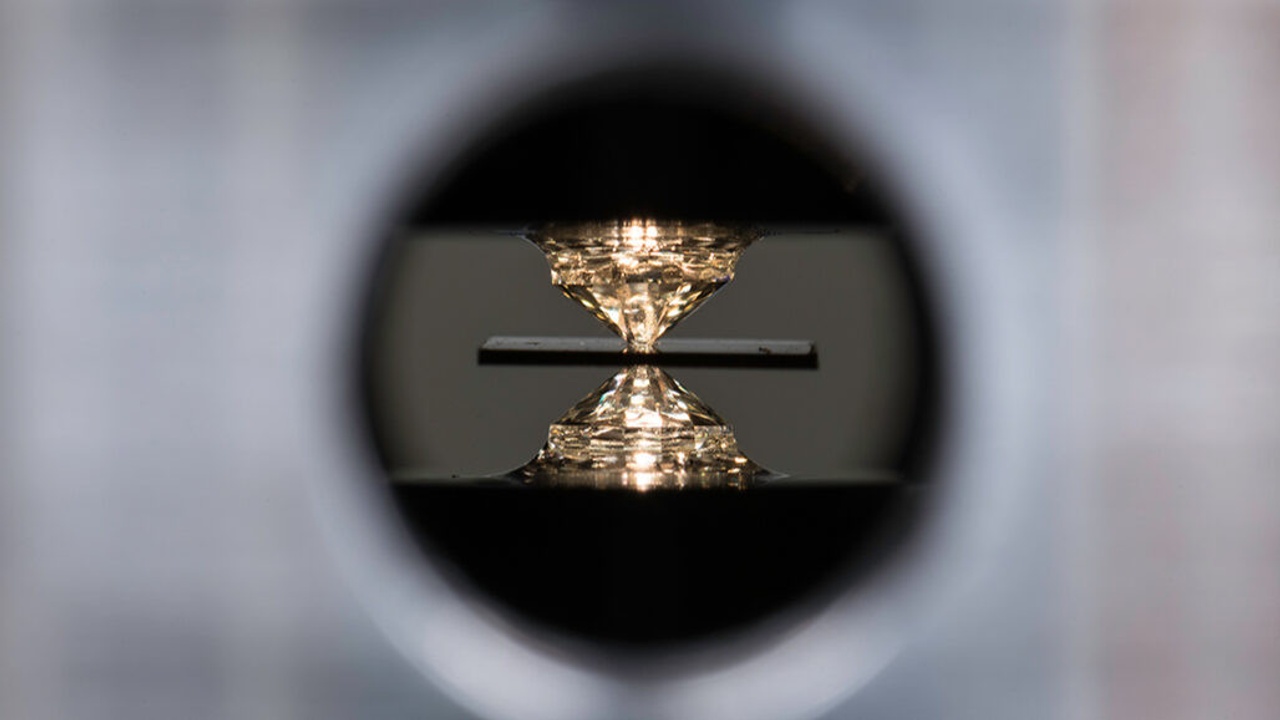 Adam Fenster for Sciencenews. “When squeezed to high pressure between two diamonds (shown), a material made of carbon, sulfur and hydrogen can transmit electricity without resistance at room temperature”.

Superconductivity is the capacity that some materials show to conduct electricity without any resistance. Hence, with no energy loss. Such behavior would provide a huge advantage, since it optimizes the efficiency of all our electronics components and electrical transmission. Applications are endless; improved current technologies, going from Magnetic Resonance Imaging (MRI) to magnetically levitated transportation and quantum computers.

First observed in 1911, superconductivity required temperatures reaching absolute zero, the point where there is an abrupt transition in the behavior of electrons, that suddenly couple in pairs (called Cooper Pairs), instead of repelling each other, and flow as a superfluid without any resistance. In this state, magnetic flux fields are expelled from the interior of the material.

In an ordinary metallic conductor, the resistance decreases gradually as its temperature is lowered even down to near absolute zero, therefore, one signature of superconductors is the sudden drop to zero resistance, and the resulting perpetual circulation of current, even in the absence of a power source, once the superconducting state is achieved. This latest characteristic would represent the holy grail of physics, a perpetual energy source!  The caveat remains in the fact that this extraordinary behavior is not sustainable; extreme cold conditions require a huge amount of energy consumption to keep the sample cold, hence, this kind of perpetual energy source would require a perpetual energy expend to keep it in the superconducting state at so low temperatures.

Nevertheless, efforts have been directed into creating the appropriate materials and conditions as to achieve the feast of superconduction at room temperature …

And this is what Dias and colleagues found by squeezing carbon, hydrogen, and sulfur atoms between the tips of two diamonds and lighting the material with laser light to induce chemical reactions. The pressure exercised by the diamonds into the sample, is 267 gigapascals, which is about 2.6 million times that of Earth’s atmosphere. When temperatures in the experimental setup dropped below 15° C, the electrical resistance dropped to zero, as shown in the Fig. 1 below. Then, by applying an oscillating magnetic field to the material, the team saw that it expelled it from its interior, when becoming a superconductor. This confirmed superconductivity. 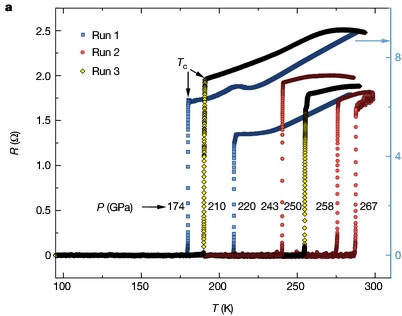 Normally, the atomic composition (known as stoichiometry) of materials undergoing superconducting phenomenon have been well determined, as the figure below shows, depicting the material composition, their critical temperature (at which they become superconducting) and the year they were found.

On this particular experiment, it is yet not clear what is the chemical reaction happening between the diamond tips, so the resulting material presenting this behavior is yet to be fully understood. The authors claim they have created a lan- thanum ‘superhydride’, although they lack a precise determination of its stoichiometry, as well as the tools to determine such parameters.  Raman spectroscopy was used, as one of the tools to determine the composition of the material. 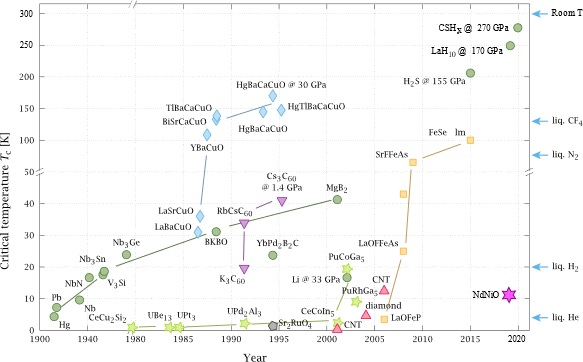 As the authors of this research published in Nature explain, extreme pressure facilitates the production of new quantum materials with unique stoichiometries and a mechanism for pressure-induced metallization, which is required in order for an initially non-conducting material, to become conducting. Hydrogen seems to be a key atom element in these potentially superconducting materials, where the superconductivity seems to be driven by high frequency hydrogen phonon modes.

Interestingly, authors have seen that the specific stoichiometry XHn (where H is hydrogen and X is another element) seems not to be as critical as having a hydrogen-rich chemical environment that mimics the properties required for superconductivity, such as the appropriate electron density near/at the Fermi surface and high-frequency phonon modes of idealized pure metallic hydrogen.

Although the mechanism is not still clear, allowing chemical reactions seems to be a key factor in this endeavor. A deeper understanding of this mechanism would probably reveal important features as to decrease the pressure to reasonable values that could allow real life applications.

It is interesting to note that hydrogen atom is a key element in the new materials presenting superconducting properties at room temperature, in proper experimental conditions. From the generalized holographic theory from Haramein, we find that hydrogen is the holographic unit of the universe, therefore it would not be surprising to see that hydrogen is a key component for most if not all of the physical phenomena around us, including this extraordinary phenomenon.

This reminds the work by Dr. Urdaneta, in which the surface enhanced raman spectra (SERS) of dopamine adsorbed on titanium dioxide surfaces is probed using stretched molecular geometries of the isolated molecule dopamine. It was serendipitous to find that the most important features of the SERS in the complex (where the charge transfer from surface to molecule is supposed to be responsible of the enhancement of the Raman spectra), could be found already in the isolated molecule, just by stretching dopamine most acidic O-H bond. The hydrogen atom, appearing here as well, as a key factor of the phenomenon.