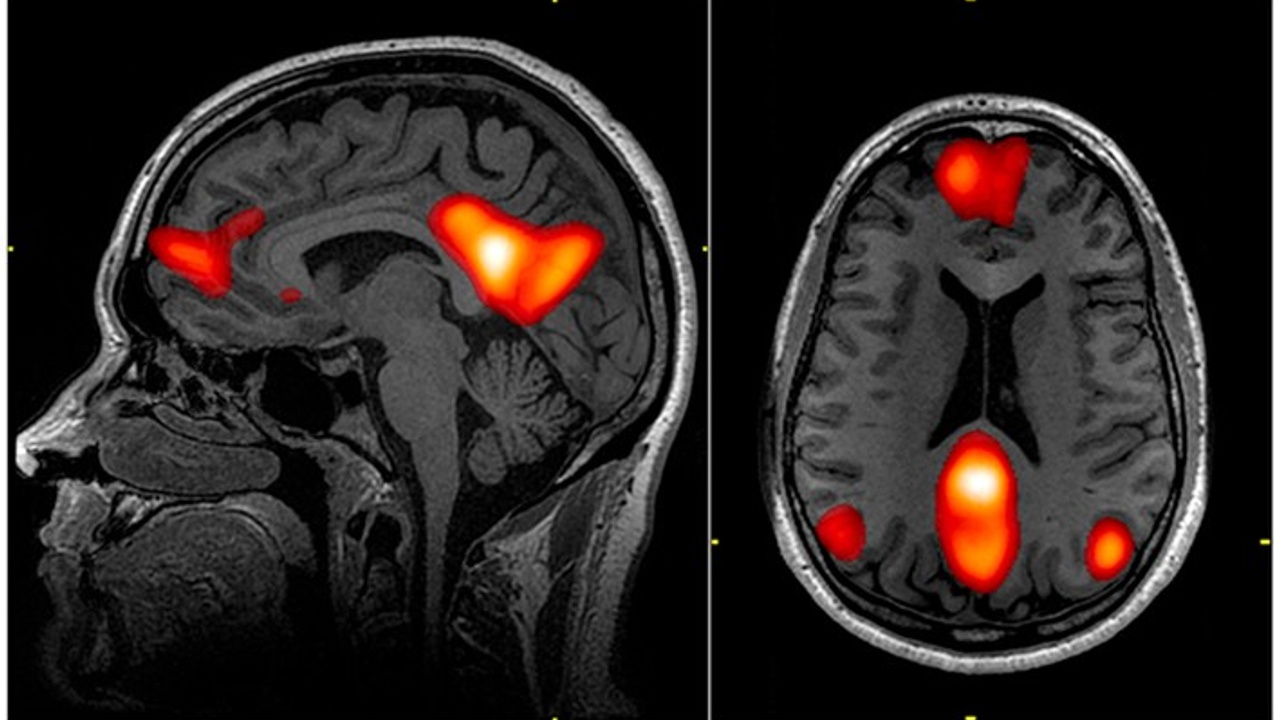 Spatial Topography of the Brain

A meta-analysis of magnetic resonance imaging data of neuronal activity in advanced meditation practitioners has discovered a reorganization of information processing topography in which brain regions involved in present-awareness have increased activity while ego-centric and subject-object (discriminatory) neuronal information processing layers are mitigated [1]. The researchers identify the neural correlates associated with the feeling of unity of experience—a state that advanced meditation practitioners can experience, often described as a non-dual state of experience that does not maintain the strong distinction between self-other or subject-object information, but rather a unified experience of oneness, or singularity.

The study is based on Qin et al.’s (2020) neural model (Linking bodily, environmental and mental states in the self—A three-level model based on a meta-analysis [2]), which subdivides self-processing into three integrally connected and spatially nested levels with different topographic extensions in the brain: (1) interoceptive-processing, involved with processing signals from internal inputs like organs or proprioceptive sensory input (2) exteroceptive processing that processes and integrates signals from the environment, involving the five primary senses, and (3) mental-self-processing, involved with generating a distinctive sense of self (ego). Qin et alia applied meta-analyses of neuroimaging studies to identify neural patterns and found that in all three levels of information processing there is common involvement of a brain region called the insula (see figure 1). 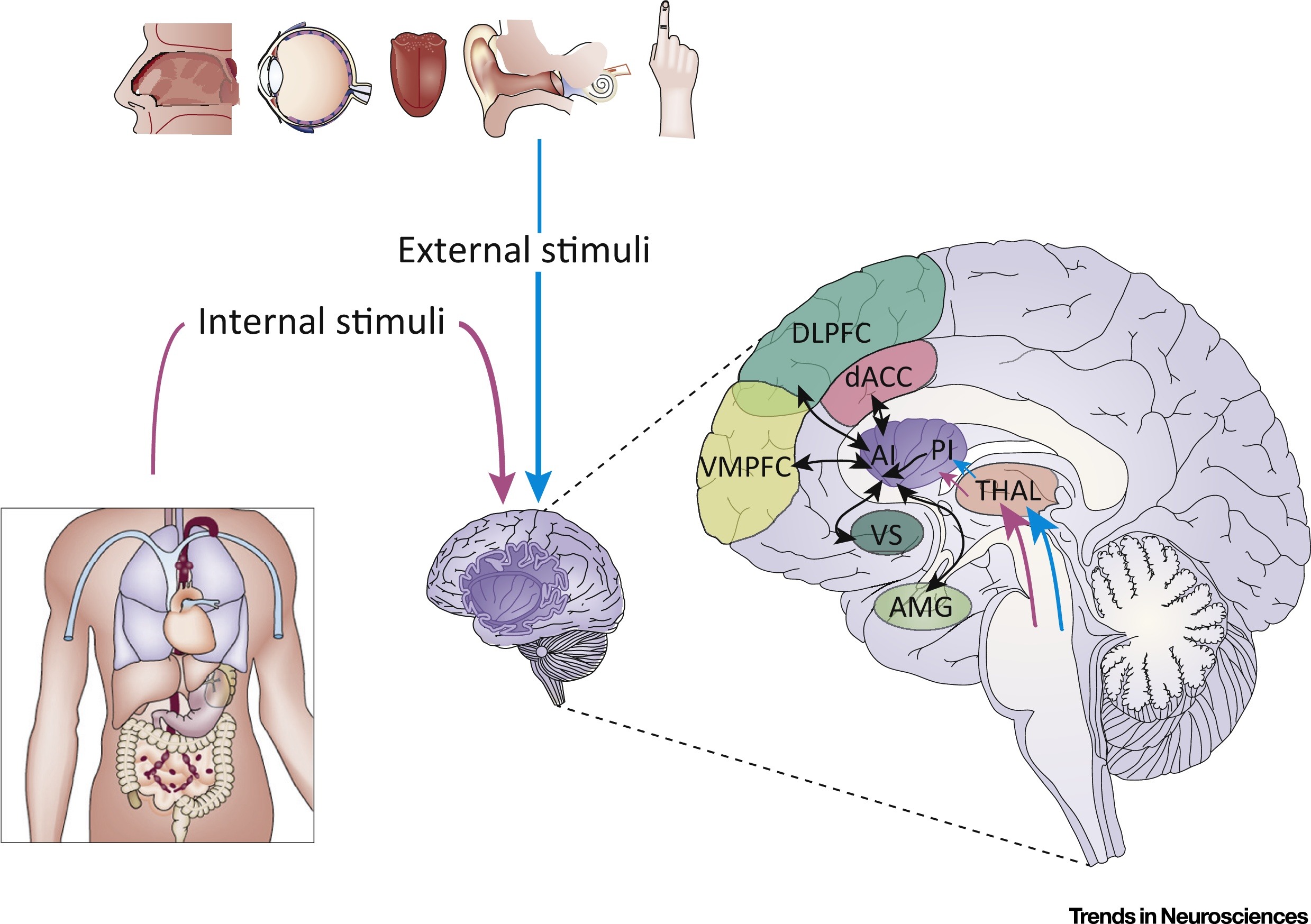 There are regions in the insula strongly correlated with the processing of self-other information processing and these regions form a layer that is often referred to as the default mode network (mentioned previously as the DMN). Another important layer is the central executive network, which involves regions of the insula but also brain regions important to mindfulness like the cingulate cortex and medial prefrontal cortex: the CEN is very much involved with mental-self information processing. From the meta-analysis data, the researchers determined that there is a distinctive shift in these information processing layers such that DMN activity is reduced, DMN-CEN synchronization undergoes a more positive connectivity, and dominant information processing shifts to the attention networks of higher order brain regions like the prefrontal cortex: leading to greater present-moment awareness and integration of self with environment and internal feelings. 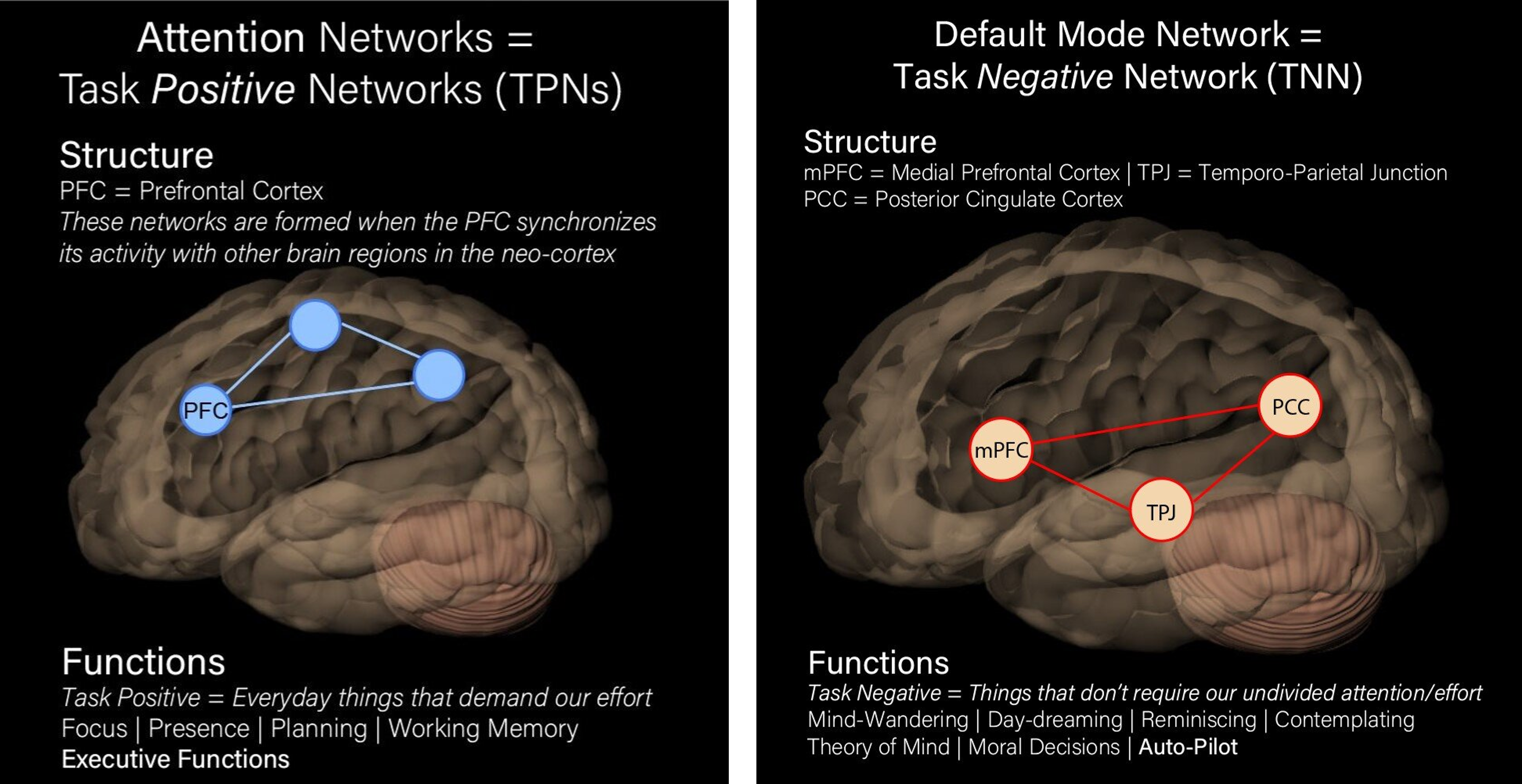 Figure 2: Topographic layers of the brain correlated with consciousness and distinctive modes of mental activity. Left image, task positive networks engaged during focused activity, planning and working memory. This topographic layer involves the executive functional center of the prefrontal cortex (PFC). Image at right, the default mode network, engaged when activity is on "auto-pilot", with low-level awareness of what the mind and body are doing, often attention is focused away from the present moment. 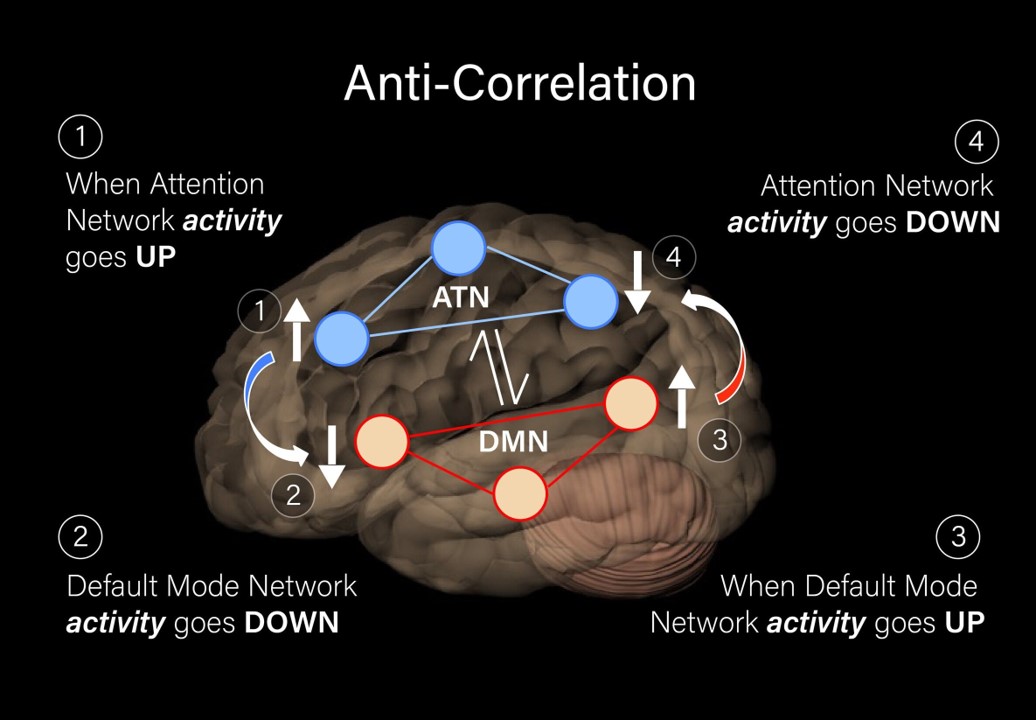 Figure 3: The attention networks and default mode network are topographic spatial regions of the brain that are anticorrelated, with focused attention reducing activity in the DMN while increasing activity in the positive task networks of the ATN, and vice versa. Researchers in the present study have found that meditators have much higher activation of the ATN with decreased activity of the DMN, as well as high-order integration of the DMN with other levels important to attention awareness like the central executive network.

Given the various spatial-topographic and temporal dynamic changes in the brain’s neural activity associated with meditation, we suppose that they translate into more or less corresponding spatiotemporal changes in our experience on the mental level. In other terms, the brain’s topographic reorganization between higher-order self-related regions [default mode network (DMN)] and lower-order nonself-related regions [central executive network (CEN)] translates into a more or less corresponding nondual reorganization of our experience – Cooper et al. Beyond the veil of duality—topographic reorganization model of meditation,” Neuroscience of Consciousness, vol. 2022 [1].

The main results of the study are:
(i) decreased posterior default mode network (DMN) activity

(iv) increased connectivity within the anterior DMN and CEN

(v) and significantly impacted connectivity between the DMN and CEN (likely a nonlinear phenomenon).

Significance of Reorganization of the Brain’s Spatial Topography

Although there are a wide range of meditation modalities, a central theme to all modalities is the practice of mindfulness, which is cultivating an awareness of the present moment, so that the mind does not transiently jump to thinking about past events, future potentialities, or internal narration that often focuses on judgements of events and resulting perceived consequences to the self.

The array of different meditation types have already been characterized by unique neural correlates, both structurally and functionally (Fox et al. 2016; Laukkonen and Slagter 2021), with this recent study showing reorganization in the spatial topography of how the brain processes information, with a clear change in the neuronal network information processing pathways, so that brain regions or layers involved in mindfulness and a present-moment awareness become predominant while those involved in self-referential thinking (cogitation on ‘how do experiences affect me’) decrease. Demonstrating empirically that there is a significant and quantitative change in the neuronal activity and neural correlates of brain function when mindfulness meditation are practiced consistently, leading to a highly beneficial state of integrated awareness with greater accession to higher-order brain function.

Such reorganization of the brain’s information processing topology is significant in changing how a person perceives the world and their relationship to the experiences of daily life, in a therapeutic context this has made meditation a popular practice (even medically prescribed) to lower anxiety and stress, as mindfulness strengthens the brain’s ability to stay focused in the present-moment, so that undue worry is not given from constantly contemplating the past and potential future events. The former of which there is no way to change, and the latter of which is most effectively managed by actions in the present moment. Such mindfulness techniques have a long history of extolling benefits, with philosophical traditions from Stoicism to Buddhism explaining how mindfulness, focus in the present moment, and relinquishing negative judgements about events—that arise from excessive self-referential cognitive processing—can reduce suffering and help people achieve the most effective and optimal version of themselves [4].

This study has shown a significant and objective change in brain function because of meditation, inverting the predominant levels of information processing so that experience is not executing on “auto-pilot” but instead heightened awareness in the present moment enables highly conscious and effective activity. We would further posit that there are biophysical changes occurring all the way to the cellular and molecular resolution of information processing and bioenergetics. Such that the highly focused attention of meditation can engender a state of singularity, not just a singularity of perception. It is possible that such a state mitigates the decohering interactions in the molecular dynamics of the cell, so that long-range quantum coherent states are bolstered, leading to greater degrees of qubit information processing and Bose-Einstein like states (via mechanisms like Frohlich condensation [5]). Increases in information processing at this atomic resolution couples the body much more strongly to the vacuum information structure, enabling accession of nonlocal information and energy. Such that these coherent states correlate with an expanded state of awareness, in which non-local information processing in the macromolecular networks of the cellular system give much greater integration of signals from the self, environment, and beyond, enabling experiences of non-duality, or connection with the greater universe (beyond our normal mundane quotidian experiences of the world).