Solution to the Vacuum Catastrophe! 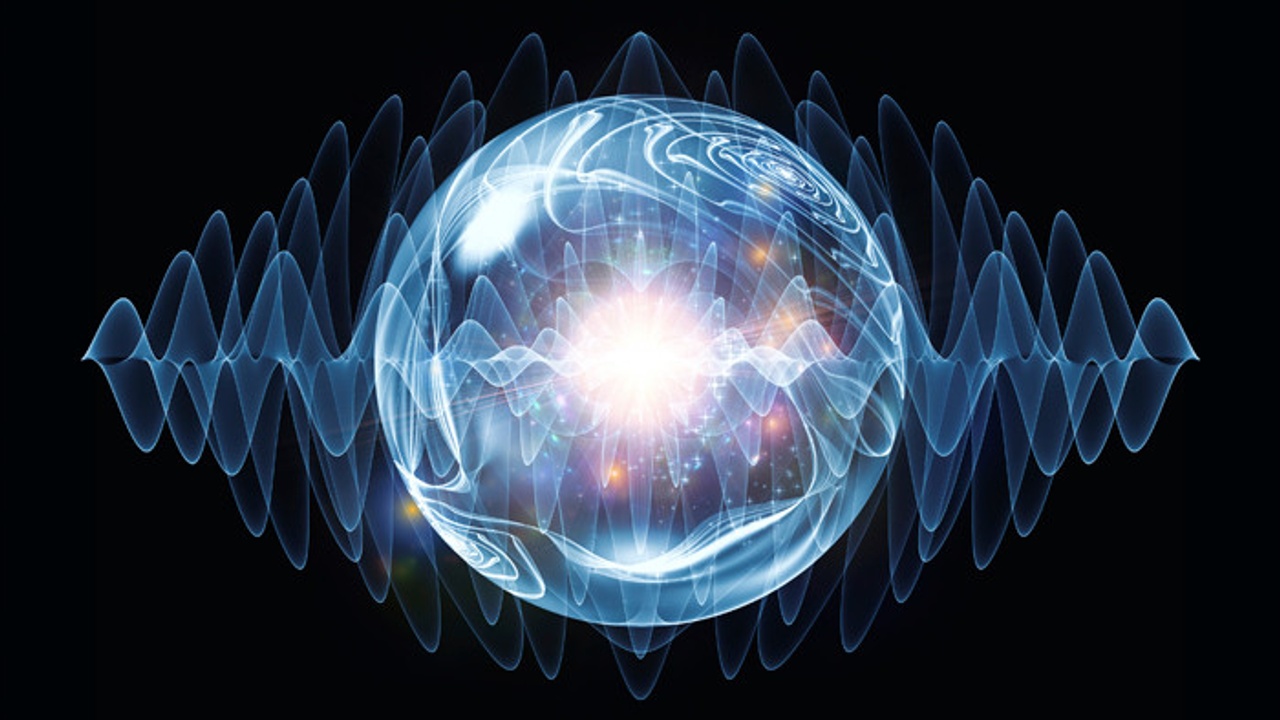 In this article we address the holographic solution that Nassim Haramein proposes to explain the large gap of 122 orders of magnitude between the vacuum energy density at cosmological scale and the vacuum energy density predicted by quantum field theory; the so-called The Vacuum Catastrophe, that we addressed in a former article. The complete calculation entitled “Resolving the Vacuum Catastrophe: A Generalized Holographic Approach”, by Haramein and Dr. Val Baker, was published in the Journal of High energy Physics, Gravitation and Cosmology, in 2019. 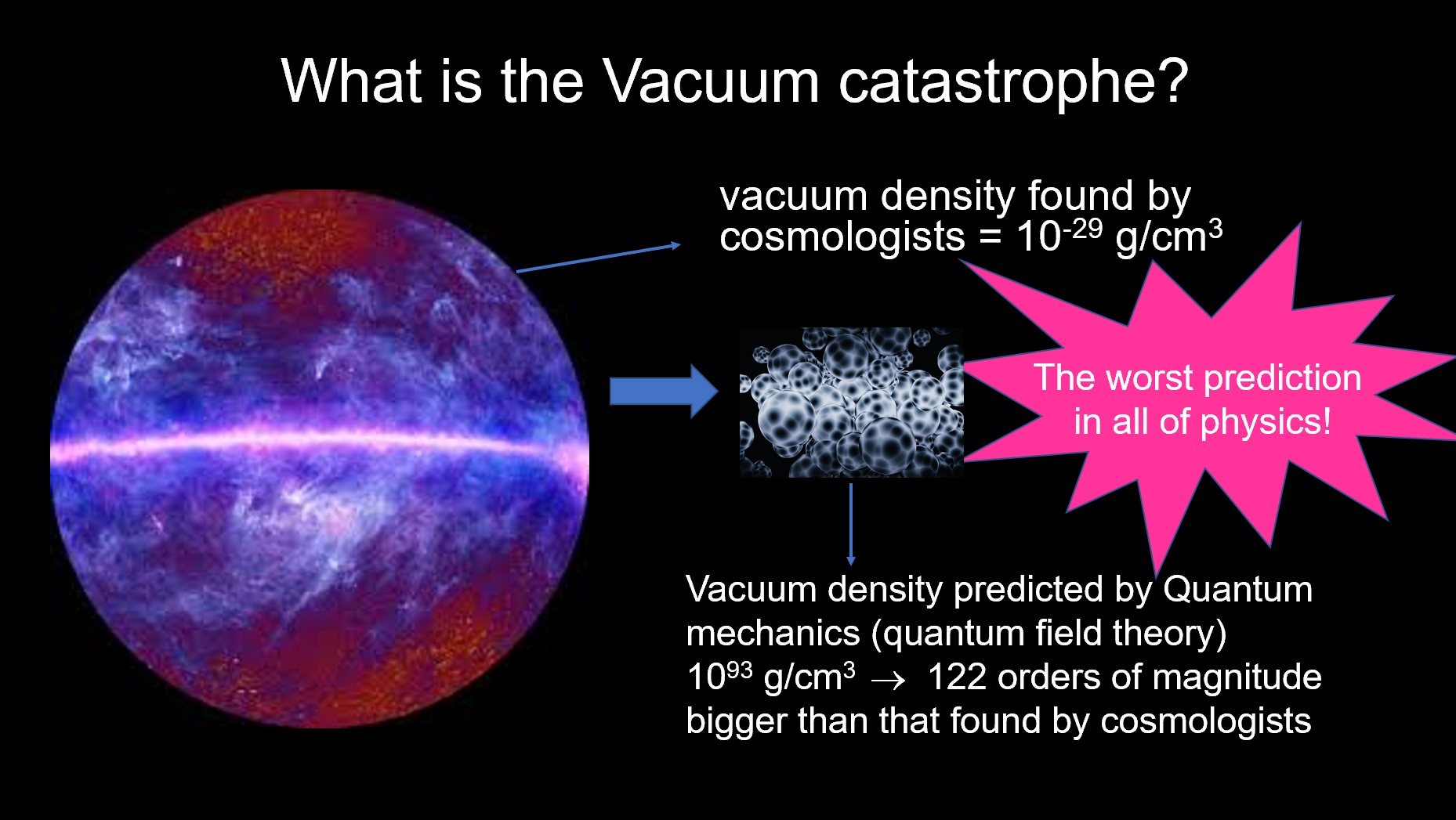 To estimate theoretically the vacuum energy density at the quantum scale, quantum field theory (QFT) describes a vacuum composed of an infinite number of electromagnetic fields which are randomly fluctuating at all frequencies (also known as vacuum fluctuations, or zero point oscillations). Through the Casimir effect we have experimental proof of the existence of these zero point oscillations. QFT thus calculates the quantum vacuum energy density at each point in space by summing the energies across all frequencies of vibration ω.

As seen in the Figure below, this gives a value for the quantum vacuum energy density of

, a value which is supported by both theory and experimental results. 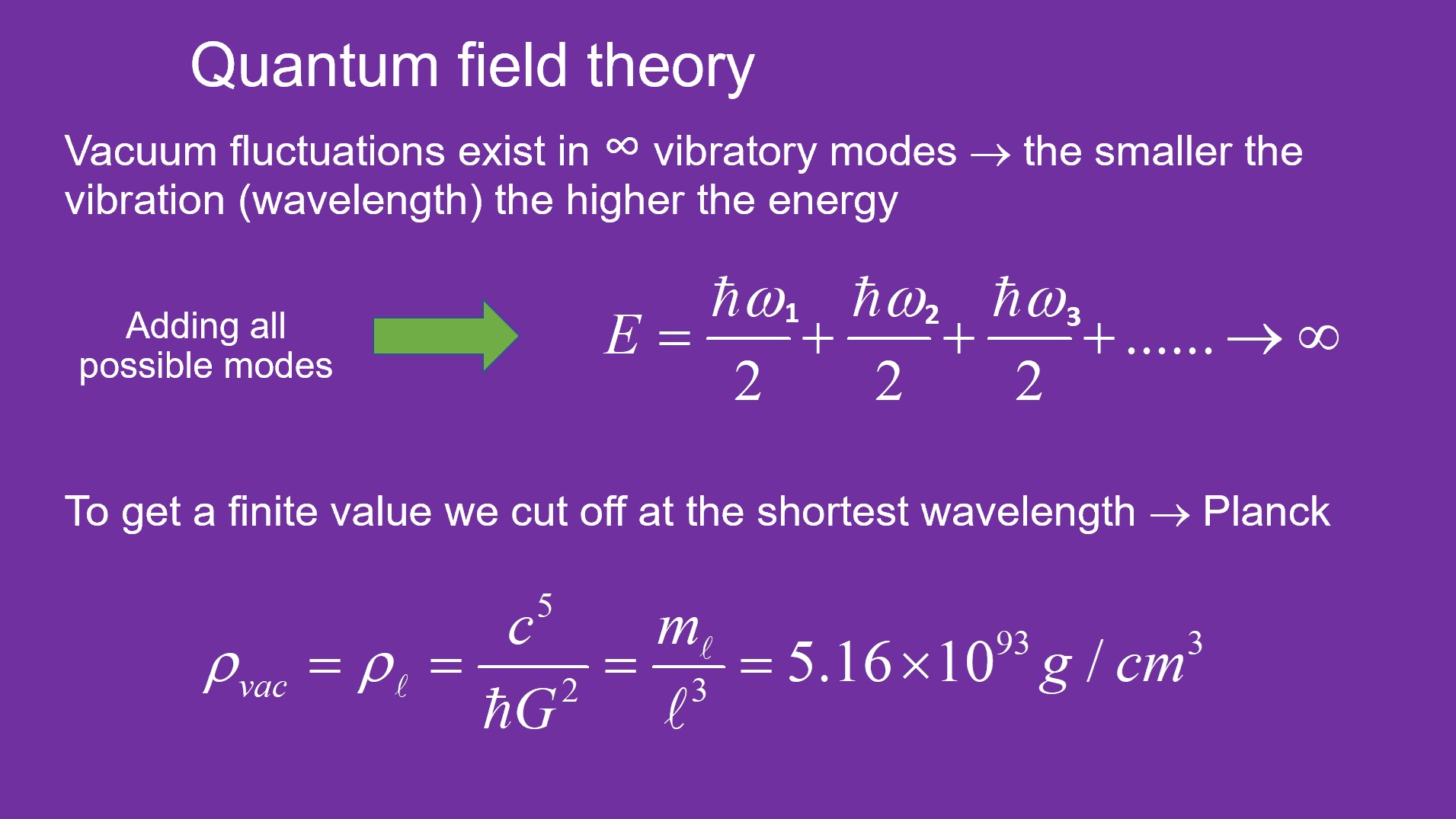 To resolve the vacuum catastrophe, we must first understand where the value for vacuum energy density at the Planck scale is really coming from.

As we see in section 7.1.2 of our unified science course, Nassim defines a Planck area (2D), that is, a circular area with Planck length diameter, described as a “bit” or unit of information on the structure of spacetime. Haramein generalizes this concept into a 3D Planck Spherical Unit (PSU), where the bit is the equatorial area of this PSU, to solve gravitational equations at both the cosmological and quantum scales [1].

, is slightly bigger than the standard value predicted by quantum field theory that we addressed in the former article,

which is obtained by renormalizing at the Planck cutoff using a cube as a volume unit of space instead of a sphere as a unit of volume.

The generalized holographic model describes how any spherical body can be considered in terms of its PSU packing, which is also its volume entropy R. The mass-energy (or holographic mass) MR is given in terms of PSUs with the equation MR = R ml being ml the Planck mass, where R is calculated by dividing the content of PSU in the volume V, by the volume of a PSU, Vls.

The mass-energy density of the spherical body is given as

where MR is the mass and V is the volume of the spherical body.

In the case of the proton, the mass-energy (also called the holographic mass) in terms of Planck mass is calculated as

, where R is calculated by dividing the content of PSU in the proton volume Vp, by the volume of a PSU, Vls. This quantity tells us how many PSUs can fill in the volume of the proton, as seen in the Figure below. 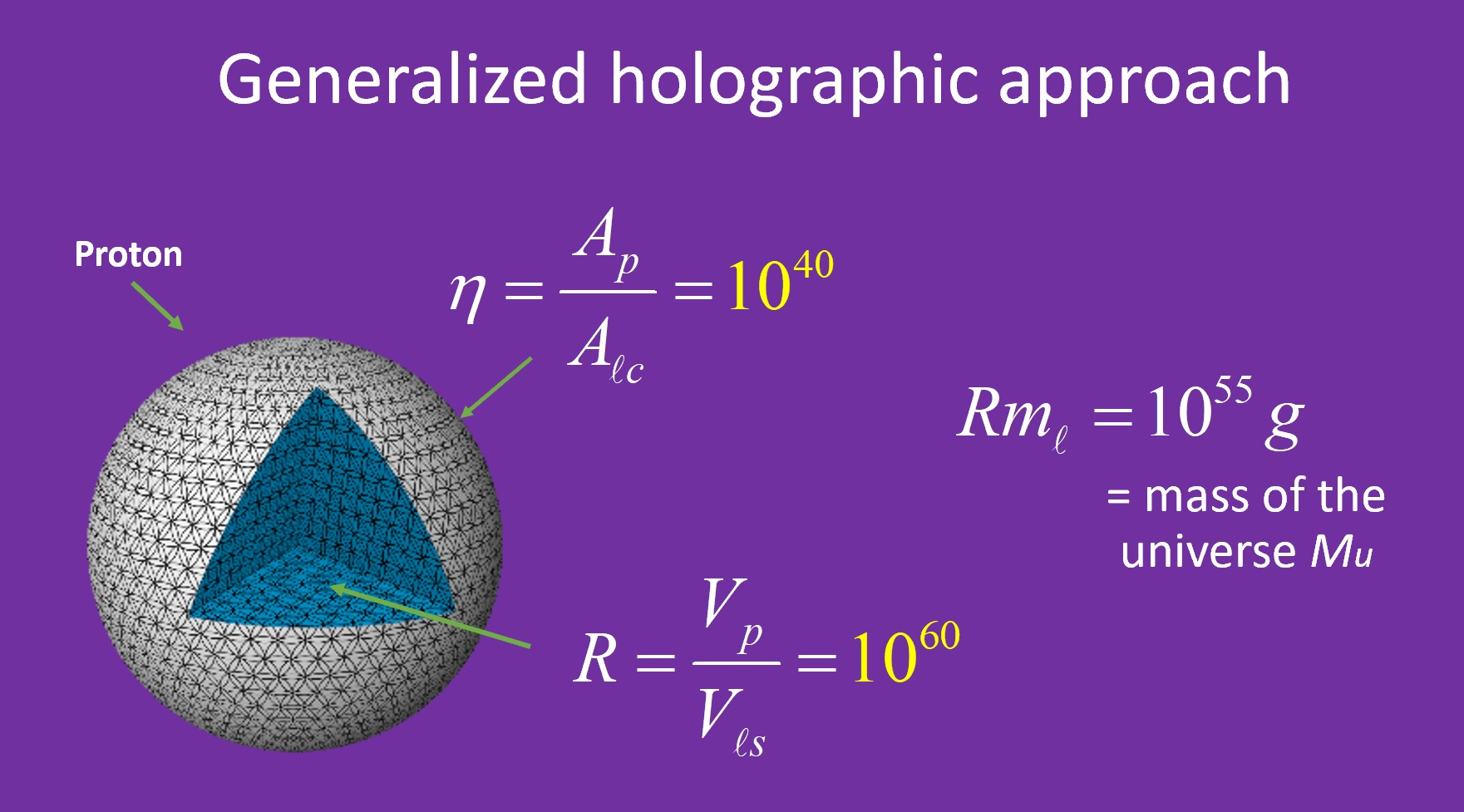 as the radius of the Universe ru).

Thus, the vacuum mass-energy density at the cosmological scale is calculated to be,

The complete process is depicted in the following figure: 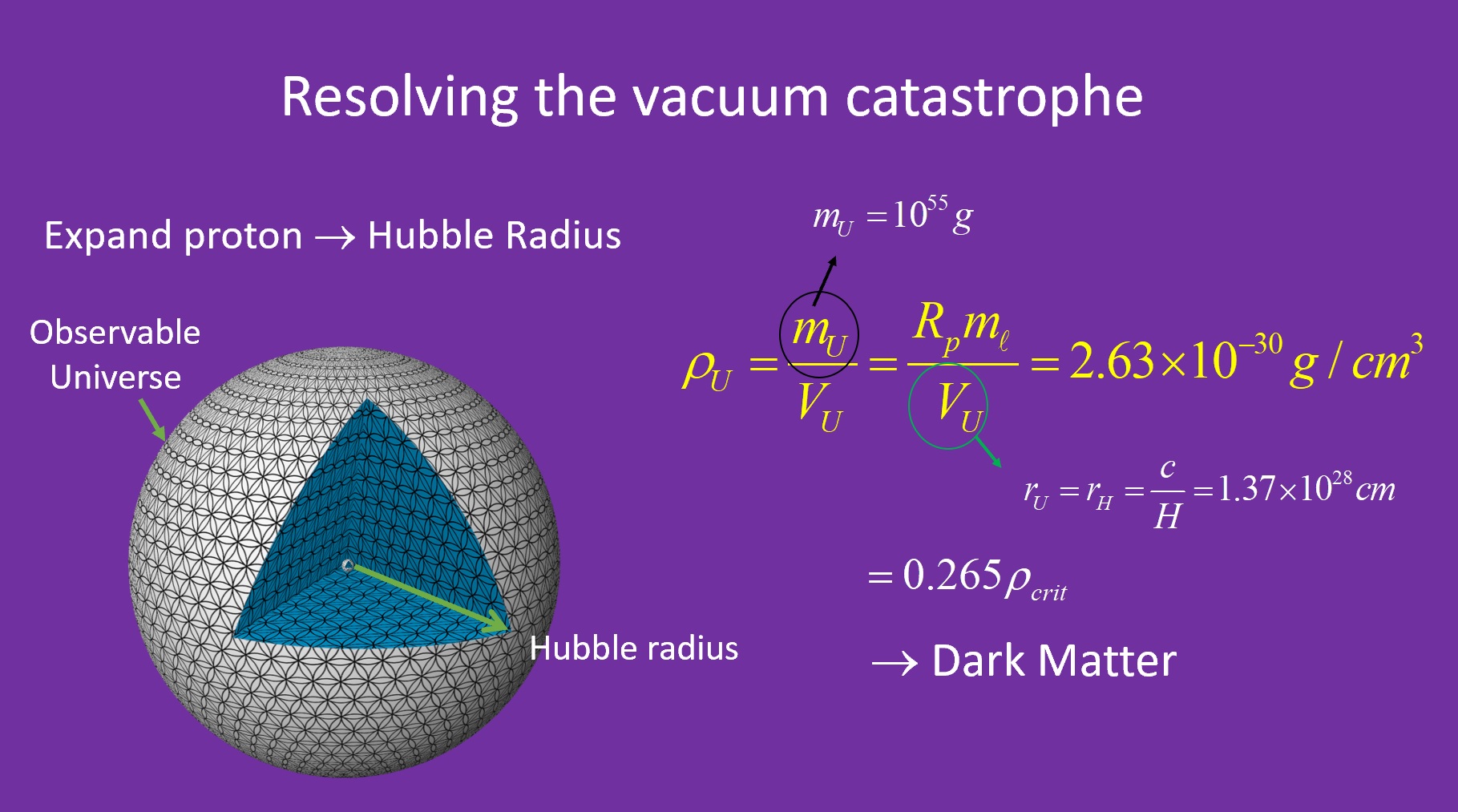 We see that this value is 0.265 ρcrit very close to the 0.268 ρcrit which corresponds to dark matter density.

Thus, when the vacuum energy density of the Universe is considered in terms of proton density and the proton’s PSU packing (i.e., its volume entropy, R) we find the density scales by a factor of 10122.

Let’s stop here for a moment to fully understand what we just did. The equation above takes a proton’s mass-energy or holographic mass, and equals it to the mass of the Universe, then puts this mass-energy inside a much larger volume, the volume of the universe, VU. And we obtain a mass density for this “proton dilated to a size of the Universe” which results in the dark mass density of the Universe, as determined by current cosmological models! Basically, we are expanding a proton which could very well be considered a singularity (a point of extremely high mass-energy density) from its size to the size of the universe … Does this sound familiar?  Of course, it does! This is a big bang!

It was then a short leap for Haramein to see that what we call the big bang is a proton that escaped from a former Universe and expanded into ours at extremely high speed under enormous negative pressure created by the extremely low density this proton found outside the former universe. It was also evident that the huge change of density from the proton expansion would create a density gradient, which just as a tornado and its pressure/temperature gradient, would provide a source of rotation at all scales. This is a source of spin! 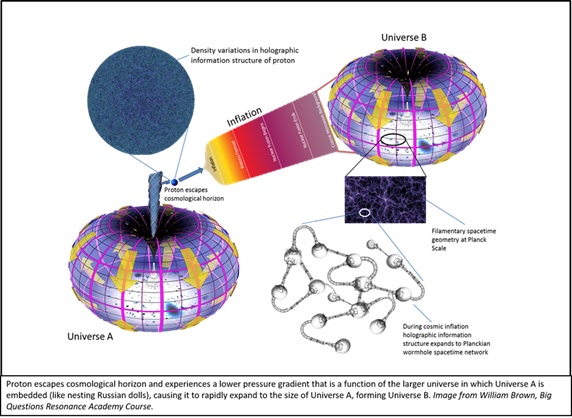 Something quite similar regarding the big bang being the expansion of an atom was suggested by the Belgian astronomer Georges Lemaitre, back in 1927, with his "Big Bang theory" of the origin of the universe, initially calling it the "hypothesis of the primeval atom." 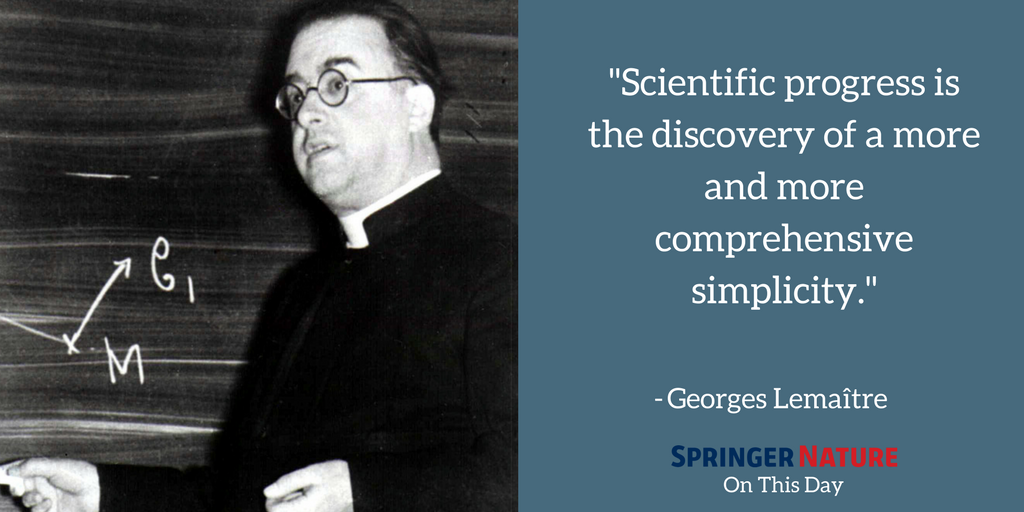 Additionally, Haramein’s hypothesis would imply that there are universes within other, larger ones, like Russian dolls. This is similar to Roger Penrose’s model of conformal cyclic cosmology (CCC), which posits that the universe iterates through infinite cycles, aeon after aeon, and that the universe became uniform before rather than after the Big Bang. In CCC, each cycle starts out as a singularity before expanding and generating clumps of matter which eventually get sucked up by supermassive black holes, which, over the very long term, disappear by continuously emitting Hawking radiation. This process restores uniformity and sets the stage for the next Big Bang (we will delve further into this theory in a next subsection).

where η is found by assuming a spherical shell Universe of radius rU = rH. The resulting change in density, from the vacuum density at the Planck scale to that at the cosmological scale, yields the exact equivalent that we calculated formerly, to the currently observed critical density of the universe, ρcrit . This is the vacuum energy density at the cosmological scale, obtained using the holographic solution, accounting for what it is known as dark energy.

By summing the numbers in the exponents of the densities of the quantum vacuum energy density (93) and the vacuum energy density at cosmological scale (30), we obtain the orders of magnitude that separate the two densities: 93+30 = 121. This simple calculation resolves the ~122 orders of magnitude vacuum catastrophe between cosmology and the Planck vacuum fluctuations, one of the “big problems in physics”. 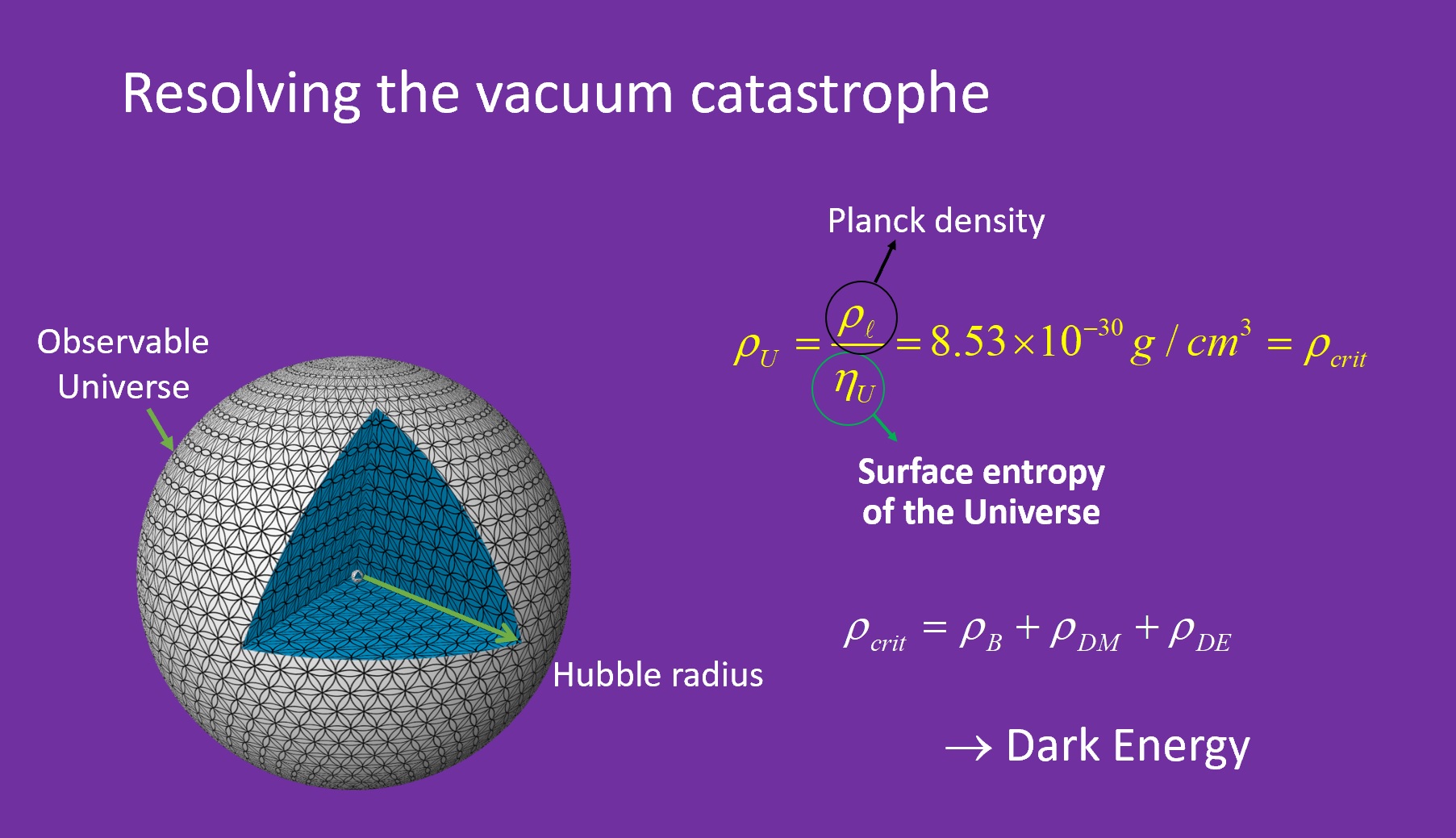 Thus, when we adopt the generalized holographic approach, which describes how any spherical body can be considered in terms of its PSU packing, we show the scale relationship between the PSUs and a spherical-shell universe and solve the 122 orders of magnitude discrepancy between the vacuum energy density at the Planck scale and the vacuum energy density at the cosmological scale.

It was then a short leap to imagine that all the information stored in the fabric of spacetime during the evolutionary expansion of our universe generated the contracting “positive” side of the energy potential (as opposed to the expanding “negative” dark energy potential) that would directly correspond to the gravitational component of the mass-energy structure that makes up the physical world.

In simple terms, when the universe expanded from the size of a proton to its current size, the information-energy content of its evolution (spacememory) was encoded in the vacuum structure, forming the material we see today as protons or atoms in our universe. When we consider a PSU as a bit of information, the solution to the vacuum catastrophe is that expansion is occurring because the Universe needs more surface to store the information embedded in its volume. For instance, this information could be the coordinates of each PSU, or any relationship between them.

Since each PSU also represents a quantum of rotation, or a quantum of angular momentum or spin, it then happens that by properly accounting for the energy of the vacuum fluctuations and their density, we have included the intrinsic spin which is inherent to the fabric of space. In this sense, dark matter was proposed to account for an additional source of gravity that would hold a galaxy together and prevent it from dispersing and tearing apart. By including spin in the structure of space, the centripetal force component of this spin can provide this cohesive force and account for the additional gravitational pull. Dark energy was also invented to account for the additional expansion force that is accelerating the expansion of the universe. But this force can also be attributed to the centrifugal force component of the spin inherent to the structure of space, thus providing a source of energy (the so-called dark energy) equivalent to the cosmological constant.

Coffee is a beautiful analogy for the misunderstanding occurring in current cosmological physics, which is very closely related to our daily lives. When you look at the content of a cup of black coffee, all you see is black inside. And if you stir the coffee with a spoon, you probably will not see it spinning. But as you add milk to it and start stirring, you will see the initial spiral, just like a spiral galaxy, as shown in the photo below. If you only account for the mass and dynamics of the milk to understand the dynamics and behavior of the galaxy, you are missing 95% of the content of the whole system! 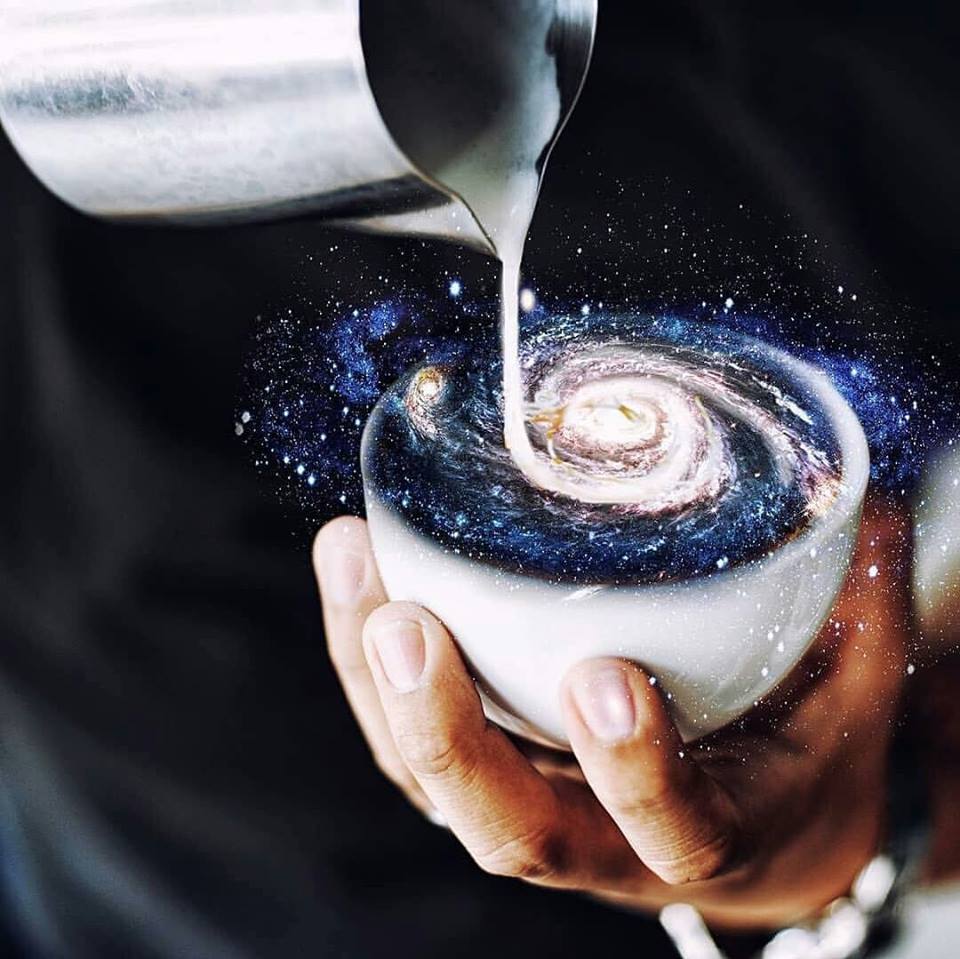 Image from Jain 108. A similarity between black coffee and dark mass /dark energy, is that black coffee is also dark 😊.

The galaxy is not rotating or spiraling on its own, it is assisted by the vacuum spin (the black coffee). In our current models, 95% is missing because 68% is dark energy and 27% is dark mass. Guess what? If you do not consider properly the coffee inside the cup, there is no way you can understand and describe the behavior of the milk in it!

Therefore, evidently, current astrophysics does not see that galaxies are connected by the medium in which they exist, even if they are millions of Megaparsecs apart. They’re less able to recognize that galaxies emerge from the dynamics of this all-filling, permeating medium in perpetual rotation… space!

As Christian Corda notes [2], extended theories of gravity generate inflationary frameworks which solve many of the problems, including accelerated expansion. This agrees with the theory presented here where the acceleration of the universe can be explained in terms of a pressure gradient caused by the information transfer potential at the surface horizon.

Finally, the solution to the vacuum catastrophe also hints into a very intriguing scenario … that our Universe fulfills the condition of a Black hole, once you consider the contribution of the vacuum fluctuations that dark mass and dark energy account for! This last will be explained in a coming article …

Note: This article is inspired in material written by Dr. Amira Val Baker, and it is contained in section 7.2 of our free Unified Science Course.