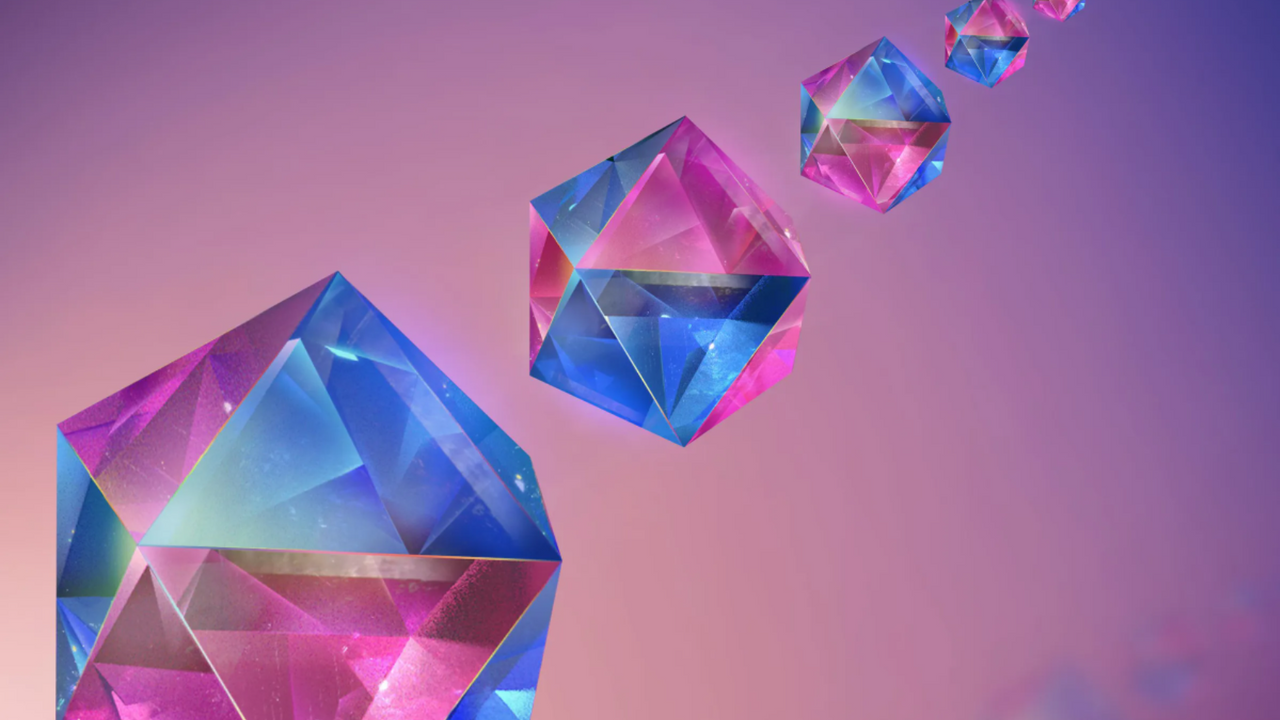 We first reported on the break-through observation of a time crystal in our article Time Crystals – A New Phase of Matter. Now, in the next major development, the same team who generated the new phase of matter have created the first time-crystal two-body system in an experiment that seems to bend the laws of physics.

As the name would imply, a time crystal is not an easy system to prepare and experiment with. Perpetual ground state motion in equilibrium defines a time crystal, however observing such motion is famously unfeasible, because experimentally a time crystal only achieves stability if it is isolated from the environment and the observer in a quantum state, where either the perpetuity or equilibrium requirements can be “bent”. Much like the quantum mechanical bit, or qubit, coupling separate time crystals while retaining sufficient isolation is a major challenge for researchers experimenting with time crystals. The discovery, published in Nature Communications [1], shows that not only can time crystals be created, but they have potential to be turned into useful devices.

Time crystals are named such because their crystalline nature does not come about by patterned spatial ordering, but instead by a repeating ordered pattern of motion in the temporal domain. First theorized in 2012 by Nobel Laureate Frank Wilczek and identified in 2016, time crystals are a bit of an oddity in physics (they were previously thought to be impossible when Wilczek first proposed the idea), due to their repeating motion in time despite no external input. Their atoms are constantly oscillating, spinning, or moving first in one direction, and then the other... a seeming perpetual motion.

As we mentioned in our first article regarding time crystals, the violation of the axiom against perpetual motion is not really violated in such systems, because the time crystal is deriving energy from coupling with the quantum vacuum energy fluctuations. However, this unique coupling with the vacuum energy requires a non-trivial quantum state, and so noise or decoherent interactions from the environment will disrupt the system. One significant source of decoherent interactions or noise can come from experimenters trying to probe the system, which has required time crystals to be kept in isolation away from the experimenter’s prying eyes.

To achieve coupling of two time crystals and perform useful observations (indirectly) the scientists— an international team of researchers from Lancaster University, Royal Holloway London, Landau Institute, and Aalto University in Helsinki—used super-cooled Helium-3 (a rare isotope of helium with one missing neutron) and generated 1012 magnons (magnons in Helium-3 arise as the quanta of transverse spin waves, associated with the magnetization that precesses around the external magnetic field of the system). In this system, the observable time crystal lifetime was extended up to a thousand seconds (109 periods of motion) in the absence of a driving force, while the underlying superfluid system provided intrinsic feedback for engineering coherent dynamics.

Spontaneous synchronization was demonstrated by pumping the magnons to a higher energy level in a confining trap after which they spontaneously fell back to the ground state. This allowed the experimenters to demonstrate that the magnon state was in a Bose-Einstein Condensate (BEC) decoupled from the driving mechanism. The transverse spin precession of the magnon BEC is then characteristic of the spontaneous periodic motion of a time crystal. 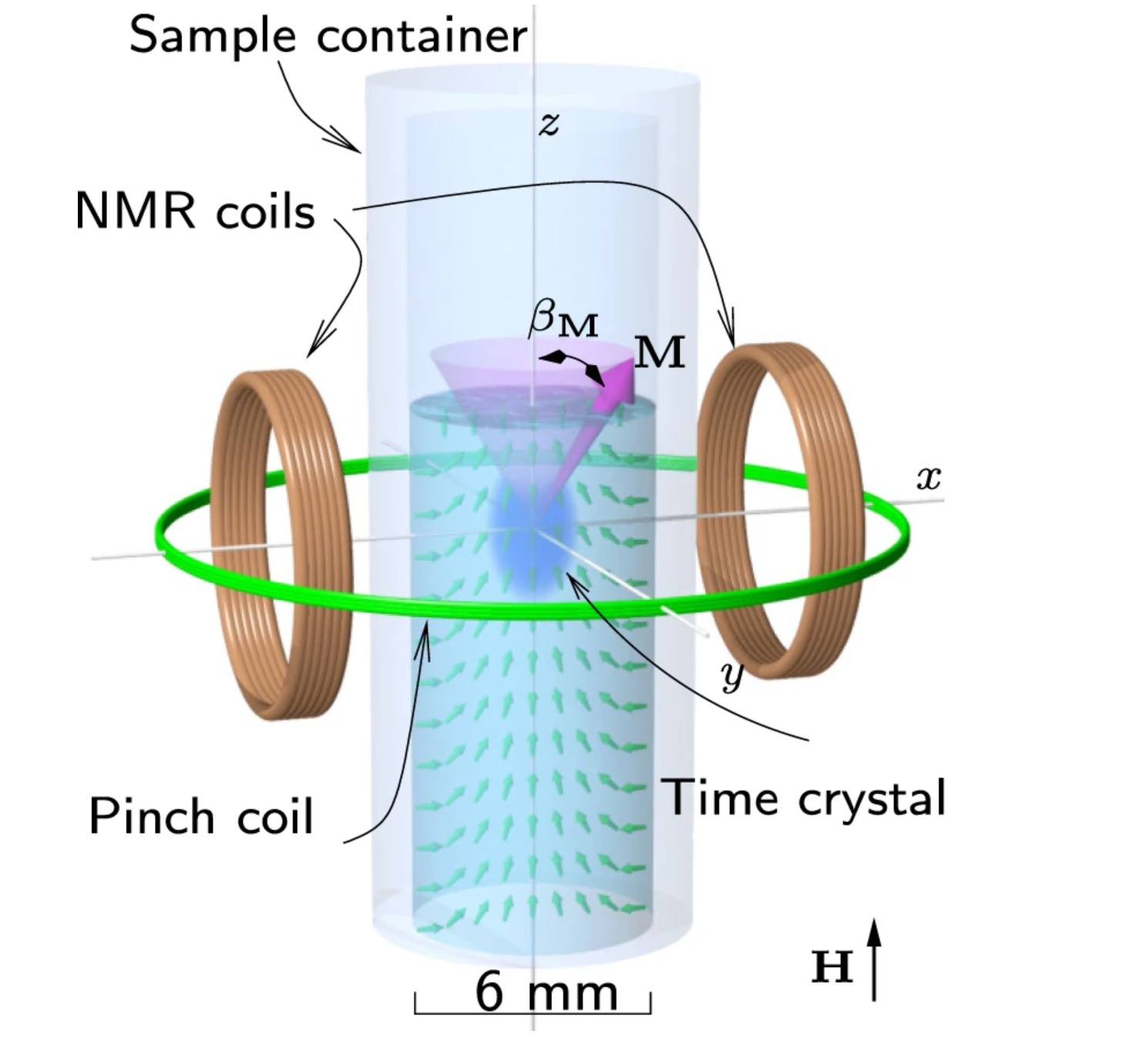 The superfluid 3He sample is contained in a quartz glass cylinder. The magnon time crystal (blue blob) is trapped in the middle of the container by the combined effect of a minimum in the static magnetic field, created using a pinch coil (green wire loop), and by the spatial distribution of the superfluid orbital momentum L (small green arrows). The coherent precession of magnetisation M (magenta cone) in the time crystal is observed using transverse pick-up coils. The static magnetic field H is oriented parallel to the axis of the cylinder. The ripple on the superfluid free surface is added for illustrational purposes. Image from [1].

In such a system adjacent magnon time crystals can become coupled, forming a macroscopic two-level system— the first of its kind using time crystals. As well, the research team showed that the spin-orbit interaction of the BEC can be harnessed to create a nonlinear feedback for magnons in a coherent time crystal system.

Nonlinear feedback is needed for spin-based versions of quintessential quantum devices such as superconducting quantum interference devices (SQUID), and as well— like the analogy to the qubit we mentioned at the beginning of the article— a "two-level system" is a basic building block of a quantum computer. As such, time crystals produced and engineered using this latest methodology can potentially be harnessed to build quantum devices that work at room temperature. For the Resonance Science Foundation researchers, it will be interesting to see what more can be learned about the dynamics of BEC and multi-level coupling, including interactions driven by quantum vacuum energy.