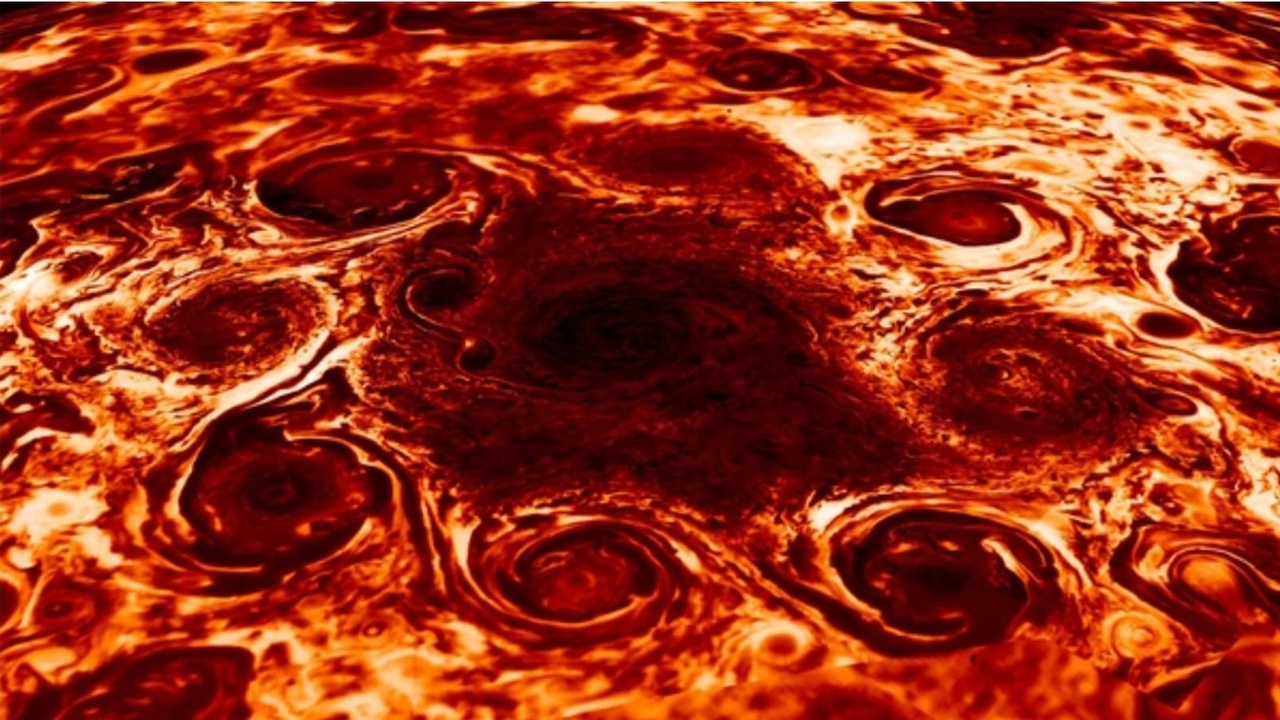 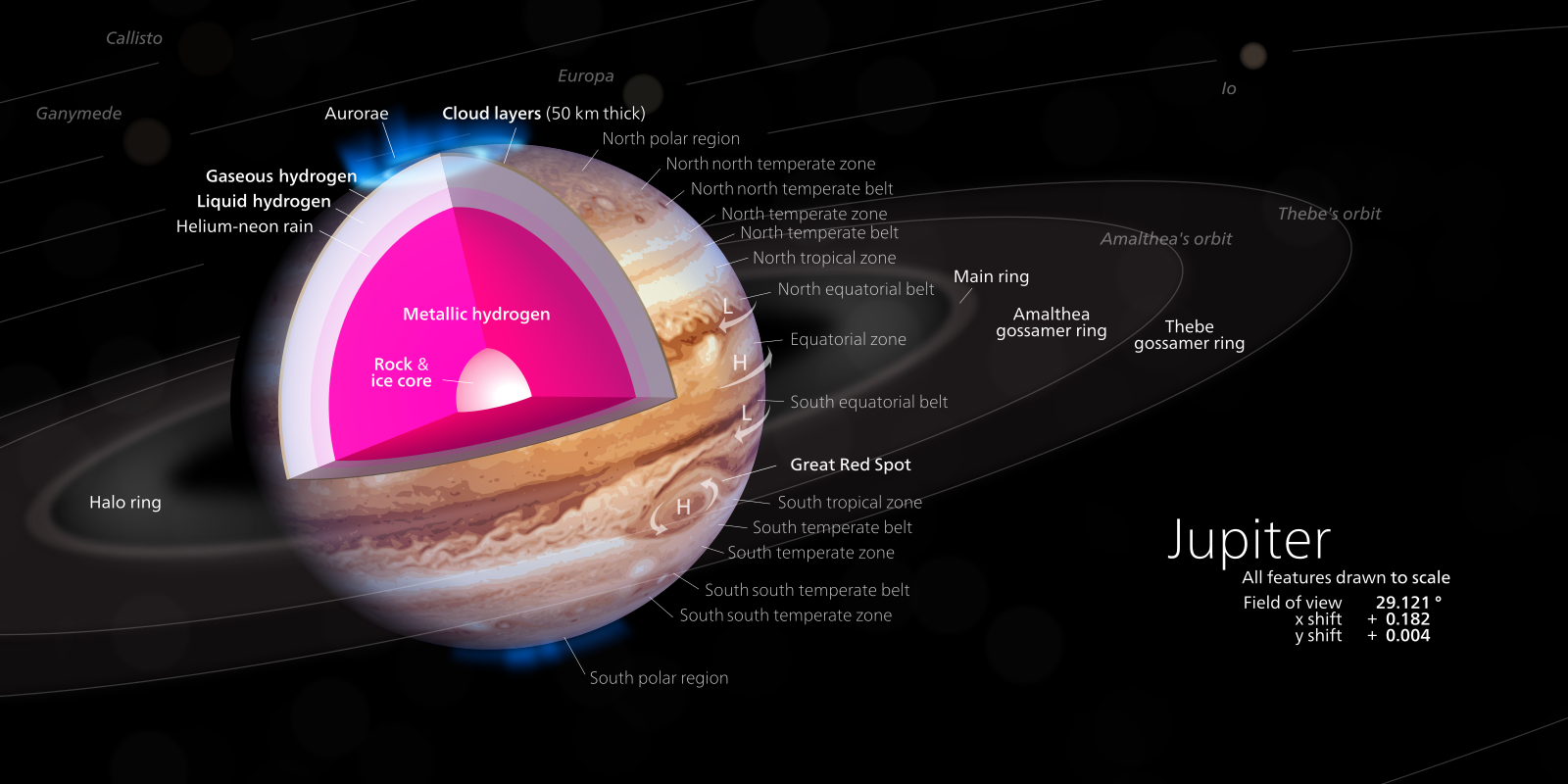 Juno spacecraft is the latest probe to visit the planet and entered orbit around Jupiter in July 2016. Since 2017 the Juno has been monitoring the cyclones at the north pole of Jupiter (one in the center and 8 smaller ones around it, arranged in an octagon pattern), which have remained stable for at least the past 4 years. Even though many models have been employed to explain such patterns and stability, these features remain a mystery in current astrophysics.

Research led by Andrew Ingersoll, Professor of Planetary Sciences at the California Institute of Technology is shedding light on these outstanding formations happening at the north pole of Jupiter and interesting features are being understood. To achieve such understanding, scientists gather information about the winds involved in the cyclones and their dynamics, from the data provided by Juno’s Jovian InfraRed Auroral Mapper (JIRAM) instrument, which can detect details of the poles down to scale of 180 kilometers.

From such data, authors determine relevant features of the system, for instance, the profile of the mean azimuthal velocity and vorticity depicted below, where we see that the mean maximal velocity in the cyclones is 80 m/s, at a radial distance of r = 1000 km. Black dots are the data points, while the orange curve is fitted by a theoretical model. The peak relative vorticity at the pole is also depicted to the right in the image below.

Most of the models used to explain the cyclones in Jupiter and Saturn are called one- and two-layer models, which show that small vortexes merge and become large-scale vortexes. The cyclones drift pole wards, while the anticyclones drift toward the equator, as they do on Earth. Nevertheless, only one of these models produce stable polygons from random initial conditions, and only when the wavelengths of the initial random disturbances are less than 300 km.

As the study published in Nature Astronomy explains, a Fourier analysis of Juno data reveals that flows with wavelengths larger than 215 km are gaining energy from smaller-scale flows. This is an example of an upscale energy transfer, reason why it is important to measure the vorticity (the capacity of a flow to rotate) and the divergence (the outwardness, or inwardness of a motion or flow) at scales much larger than the main cyclones, as to determine how the upscale energy transfer takes place.

Using a different type of model based on shallow water equations, scientists could recreate cyclones that acquire maximum velocity and radius and are arranged into different polygonal patterns around the pole, to see which ones are more stable. 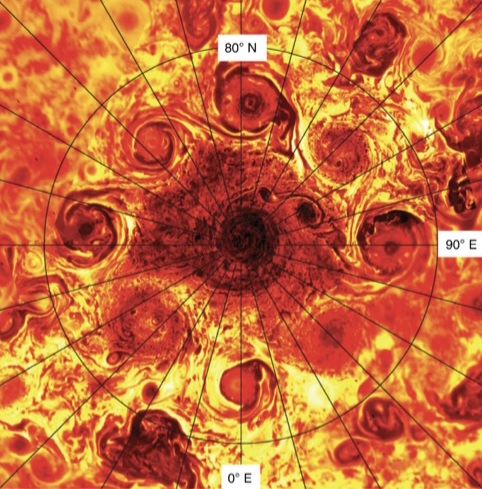 Image: the circle at 80 degrees latitude is about 2000 km from the pole. The lines of constant longitude are 15 degrees apart. Image from original paper [1].

Authors of this research found that the stable cyclones have a shielding (a ring of anticyclonic vorticity around each of the cyclones), while the unstable do not. Studying the vorticity inside and outside the large cyclones, authors could see whether they are shielded or not. If the shielding is weak, the vortexes merge and the polygons disappear.

Another very important feature of fluid dynamics, is the convection process. Convection is commonly known as a type of motion of a liquid such as water or a gas where the fluid motion is not generated by any external source (fan, motors, pumps, etc.) but by some parts of the fluid being heavier or hotter than other parts. The driving force for natural convection is gravity, that pulls down more strongly on the denser parts, while the hotter or less dense fluids rises. This leads to a natural circulation: the fluid in a system circulates continuously, with probable changes in heat and energy transfer. Standard thermodynamics and fluid mechanics would expect to find traces of convection in Jupiter’s cyclone motion. 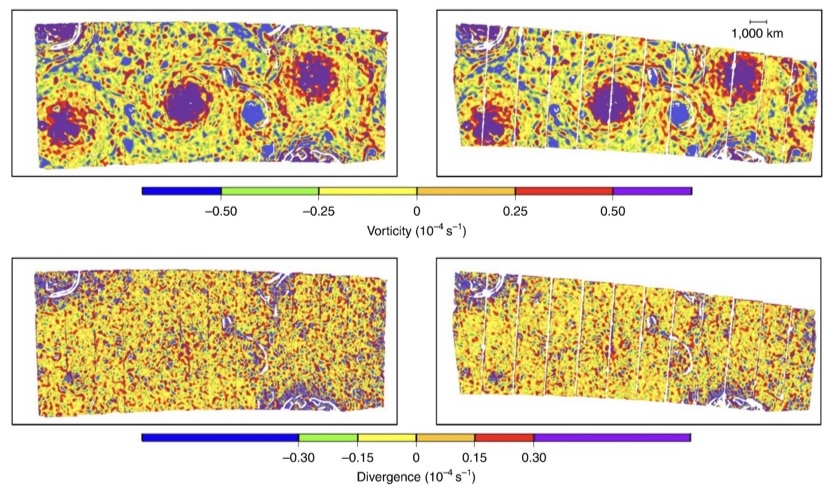 Vorticity (top) and Divergence (bottom) derived from two independent determinations of the wind. Amorphous white regions are not accounted for, because wind analysis was inconclusive. Rectangles cover 20,000 km and the smaller resolution is about 100 km. Image from original paper [1].

As the authors of this study say, much more work needs to be done to understand the remarkable features found in Jupiter.  They also hint at the possibility that new physics may be required to explain them.

The good news are … the new physics is already here!

All scientific literature treats convection and circulation as a macroscopic phenomenon, i.e., happening at scales larger than atoms. At the same time, many features of the atomic realm remain a mystery. Fundamental questions such as “what the source of spin in subatomic particles is, or why does the proton never decay, or what the zitterbewegung (a light-speed trembling along the way particle motion predicted by Dirac’s equation) in reality is…” and more, remain unsolved …

Likewise, on the other side of the scale. At the cosmological level, 96% of the Universe is composed of an unknown, still undetected dark mass and dark energy …

Evidently, something HUGE is missing in our understanding of the physicality around us. A fundamental mechanism that propagates from the tiny Planck scale and goes all the way up to the universal scale, is lacking in mainstream physics models.

What if there were fluxes at the Planck scale, happening inside the atoms, and what if the atoms were the result of the same processes -circulations and vortexes- happening at the micro-level and below? In other words, what if the ultimate source and mechanism was driven by thermodynamics and vorticity of spacetime itself, that produce all these phenomena as emergent properties of the quantum vacuum plasma?

One of the main problems in physics, is the lack of a source for spin and mass. Spin must be added by hand in the equations of quantum mechanics; therefore, it is treated as a non-classical behavior. And the source of mass is not satisfactorily explained by the Higgs mechanism, which can only account for less than 2% of the mass.

By appropriately considering the vacuum fluctuations (their structure, ordering and dynamics), Nassim Haramein has solved most of the fundamental problems in modern physics, both at quantum [1,2,3] and cosmological scales [4]. The generalized holographic model gives a quantized solution to gravity and mass, arriving to the conclusion that everything emerges from the quantum vacuum plasma, which is not composed of “random energy fluctuations”, as supposed by current theories. Instead, the quantum vacuum plasma has multiple phases, some more ordered than others, and as it will be explained in detail in the coming paper [5], it’s the thermodynamics and fluid dynamics of this plasma composed of Planck particles (coined by Haramein as Planck Spherical Units) what gives rise to all known particles, forces, and fields.

It’s the structure of spacetime spinning that produce the vorticity and the thermodynamics in the first place! Models of convection will not be able to fully explain the stability of geomagnetic vortices until spacetime vacuum fluctuations are considered …