The U.S. Department of Energy (DOE), the National Ignition Facility (NIF) at Lawrence Livermore National Laboratory (LLNL), and top science media outlets and journals make highly publicized announcement of “positive net energy gain” from presumed fusion ignition. Yet, when the total energy input of the power supply of the experiment is considered, the fusion reaction was a net energy loss greater than 99%. In other words, for every single unit of fusion energy it produces, NIF burns at minimum 130 units of energy, an efficiency of less than 1%. This is far from any “energy gain”.

With the announcement by the US department of Energy “For First Time, Researchers Produce More Energy from Fusion Than Was Used to Drive It, Promising Further Discovery in Clean Power and Nuclear Weapons Stewardship”, the question has been mooted whether we have just witnessed a scientific and technological breakthrough that will forever change the world, or if this is more hot fusion hype? The facts point rather bluntly to the latter. Here is why.

Consensus among popular science sources, including top experts in physics, have described the fusion ignition result as a net positive energy gain. Global headlines utilizing the terminology “energy gain” are misleading! Announcing that 2.05 megajoules of laser light focused on a tiny capsule of fusion fuel, imploding and igniting it yielding 3.15 MJ of energy — seems to indicate a net gain of ~1.1 MJ of energy.

However, this is not the whole story! When one considers the power supply required to operate the lasers (notwithstanding all the other energy requirements for the experiment) an entirely different story emerges. To produce the laser energy intensity at the hydrogen pellet of 2.05 MJ, a whopping 300 to 400 MJ of energy is utilized [2,3]. That’s right, accounting for the entire energy budget of the reaction, there is a net loss of ~99.6% of the total energy. This does not account for any of the time and resources required to manufacture the high-precision deuterium-tritium pellet, supercool the system, or maintain an appropriate vacuum environment in the target chamber, which in themselves require significant amounts of energy.

Evidently there is some confusion among the scientists reporting on this: 400 megajoules of energy producing 3.15 MJ is not a “net positive gain” of energy. It is a colossal ~99% loss of energy.

The Journal Science, with a headline reading With Historic Explosion, a Long Sought Fusion Breakthrough, National Ignition Facility achieves net energy “gain” with laser-powered approach, describes how the use of the term “gain” is a placeholder for:

If gain meant producing more output energy than input electricity, however, NIF fell far short. Its lasers are inefficient, requiring hundreds of megajoules of electricity to produce the 2 MJ of laser light and 3 MJ of fusion energy. Moreover, a power plant based on NIF would need to raise the repetition rate from one shot per day to about 10 per second. One million capsules a day would need to be made, filled, positioned, blasted, and cleared away—a huge engineering challenge [1].

According to the NIF’s own internal references Anatomy of a NIF Shot [2], the laser system requires 400 megajoules of stored energy: 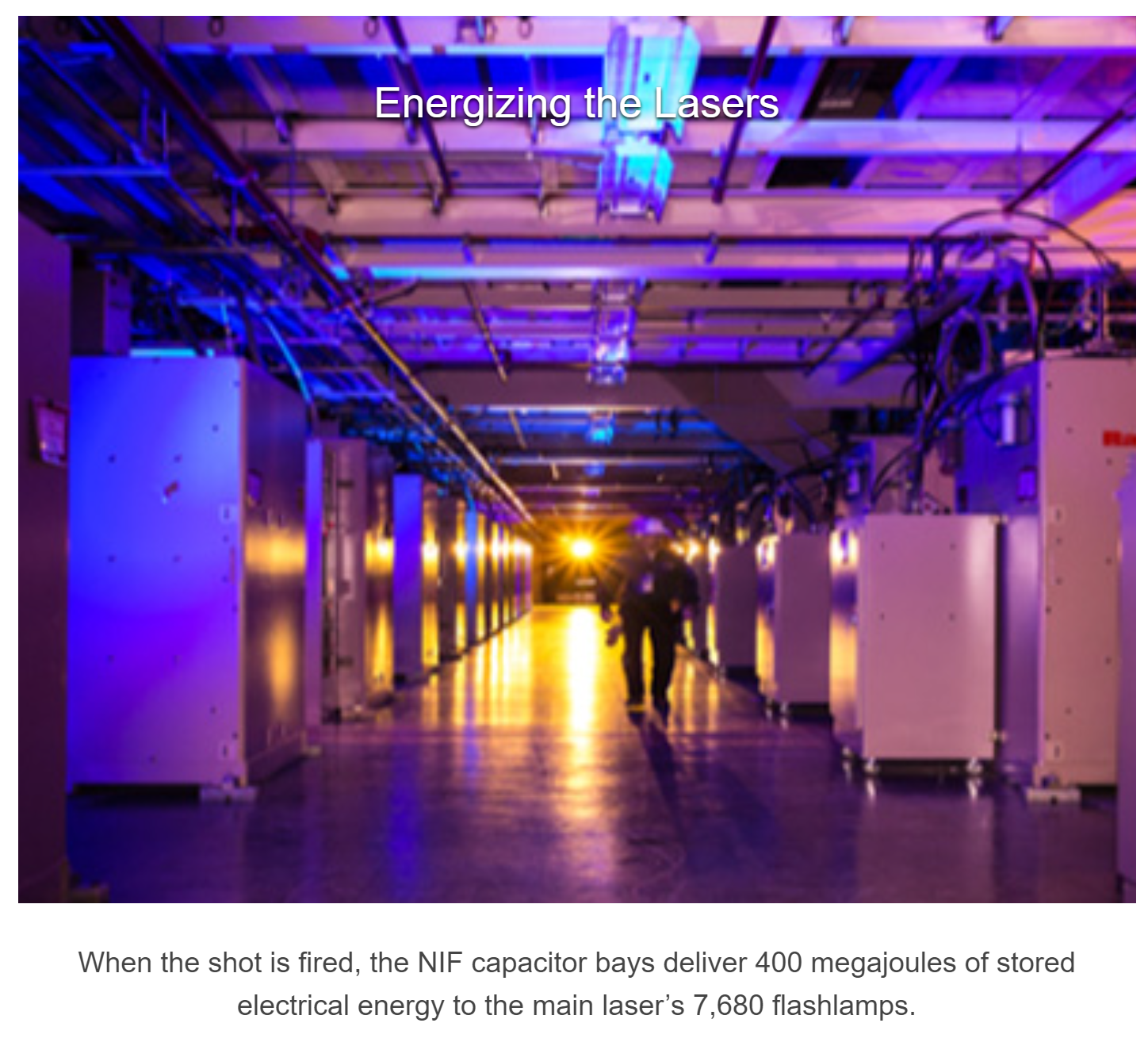 We can see from NIF’s report of the results from an August 8th, 2021 fusion reaction— Reaching the Threshold of Ignition, an in-depth look at NIF’s 1.35 Megajoule Milestone that almost all the energy from the facility’s 192 laser beams is lost to wavelength conversion, x-ray production, backscatter, and other factors before it reaches the capsule. 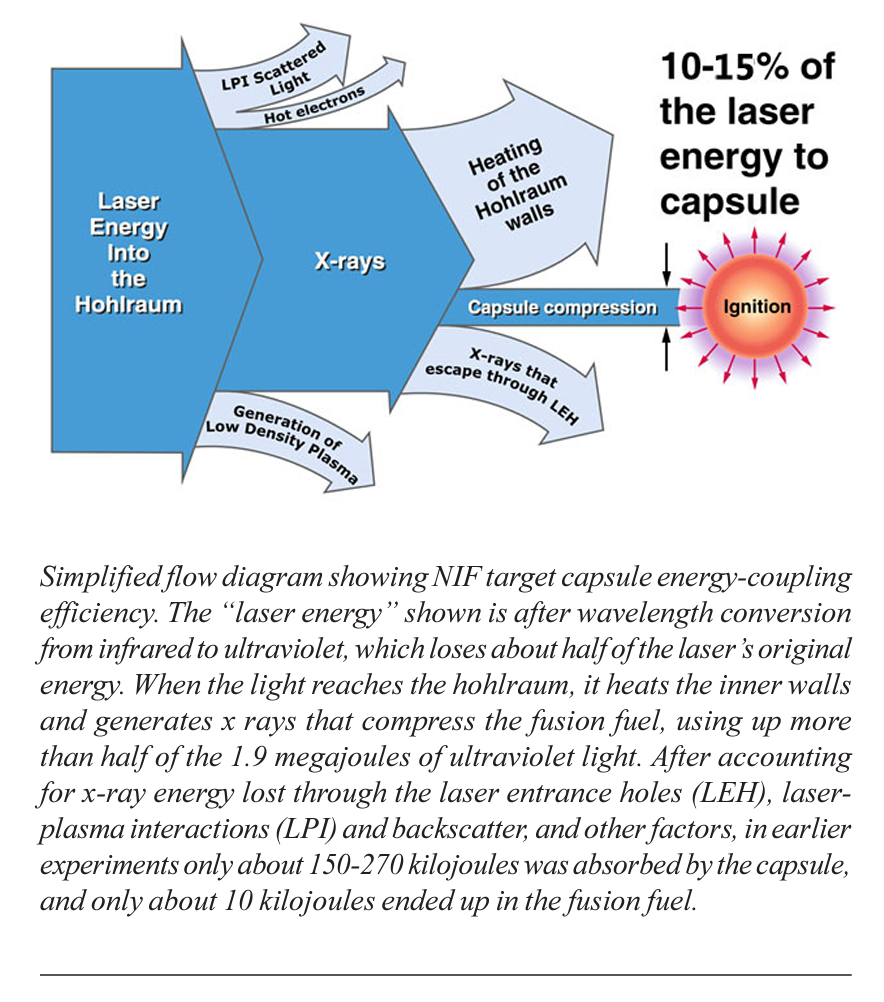 The inefficiency is staggering. The system would have to improve efficiency by at least ~10,000% to begin to approach a net energy gain. Upon consideration, this should not be surprising, as the US Department of Energy’s flagship laser facility is not focused on producing a methodology for commercial energy production. Its main objective is advancing nuclear-weapons research [3].

In many circumstances, a physics experiment is perfectly fine to report on the results of the experiment without considering the peripheral equipment, set-up, and energy costs utilized to get a result. Certainly, if NIF was only reporting on the primary objective of advancing thermonuclear weapons technology, then it would be fine.

However, since this experiment is being reported as a possible source of energy for the future of humanity, not clearly reporting and publicizing the power consumption of the device—the amount of energy that goes into powering and running the lasers used for ignition—is an inappropriate omission of critical information resulting in misleading and confusing headlines.

It is understandable to want to generate enthusiasm and support for research. Perhaps it may seem innocent to omit inconvenient facts like the fusion ignition is a ~99% energy loss so to excite the public with ‘breakthrough’ headlines about “net energy gain.” And, to encourage congressional members of the budgetary committees to keep the funds flowing. However, this kind of omission and misleading reporting is not entirely harmless. Consequently, funds will be allocated to continue to support and expand hot fusion, which is considered a “brute-force approach” to energy production (Big Think, Slate). These resources could otherwise go to funding viable clean energy generation technologies. Instead, they will be siphoned off to the massive fusion-industrial complex that is at least decades away from producing anything remotely commercially feasible.

In contrast, if an independent laboratory, or individual, working on alternative energy production reported a “net energy gain” all the while ignoring an inefficiency of ~99%, it would be ridiculed and most likely accused of fraud.

In many respects, when it comes to new energy generation technologies, we do not have the luxury of “doing science for science’s sake.” Brute -force fusion reaction experiments should be reconsidered, an if allowed to continue, we need to be diligent to allocate funding resources, scientific minds, and time to other potential viable methodologies.

Experts in the field of fusion already know that the method employed by NIF is not going to be the way the energy of fusion is ultimately harnessed:

If you look at the energy, assuming you get a 100 percent gain, you get 4 megajoules out for 2 megajoules in. Say you do this once a day. That’s the equivalent of burning a small piece of kindling, roughly. That’s not a power plant. You have to do this at 50–60 hertz thousands of times a day, dozens of times a second, to really have a power plant, which basically means you can’t use this technology. It’s just so far off. You have to move to a different technology sector entirely [4].

The NIF laser facility costs $3.5 billion (several billion over budget) and is a colossal 10 story facility housing 192 high-energy lasers. This is a tremendous amount of money and resource supporting a brute-force approach to nature, in effort to yield a long-sought-after nuclear energy source. There is another way.

There are much lower energy and lower cost alternative approaches, such as low-energy nuclear reactors. In lattice confinement fusion, for example, fusion reactions are achieved within the spaces between the atoms of a metal solid; conditions sufficient for fusion are created in the confines of the metal lattice that is held at ambient temperature. While the metal lattice, loaded with deuterium fuel, may initially appear to be at room temperature, the new method creates an energetic environment inside the lattice where individual atoms achieve equivalent fusion-level kinetic energies [5].

Perhaps the ultimate utilization of plasma is not as “fuel” as in fusion reactors however, where the reactant is burned through and needs to be constantly replenished, even then still yielding only a fraction of the total energy of the atomic nuclei. Instead, plasma can be utilized to couple in sympathetic resonance with specific modes of the energetic fluctuations of space itself at the quantum scale— the quantum vacuum energy. All energy sources and forces are essentially gradients, for example: the electrochemical gradient of a battery, the gravitational potential gradient of a hydroelectric dam, etc. Therefore, generating a gradient in the energetic vacuum fluctuations of quantum space can enable us to harness this nearly limitless, clean, ubiquitous energy source… the ultimate energy source. Significant resources should be allocated in these fields of investigations as well.