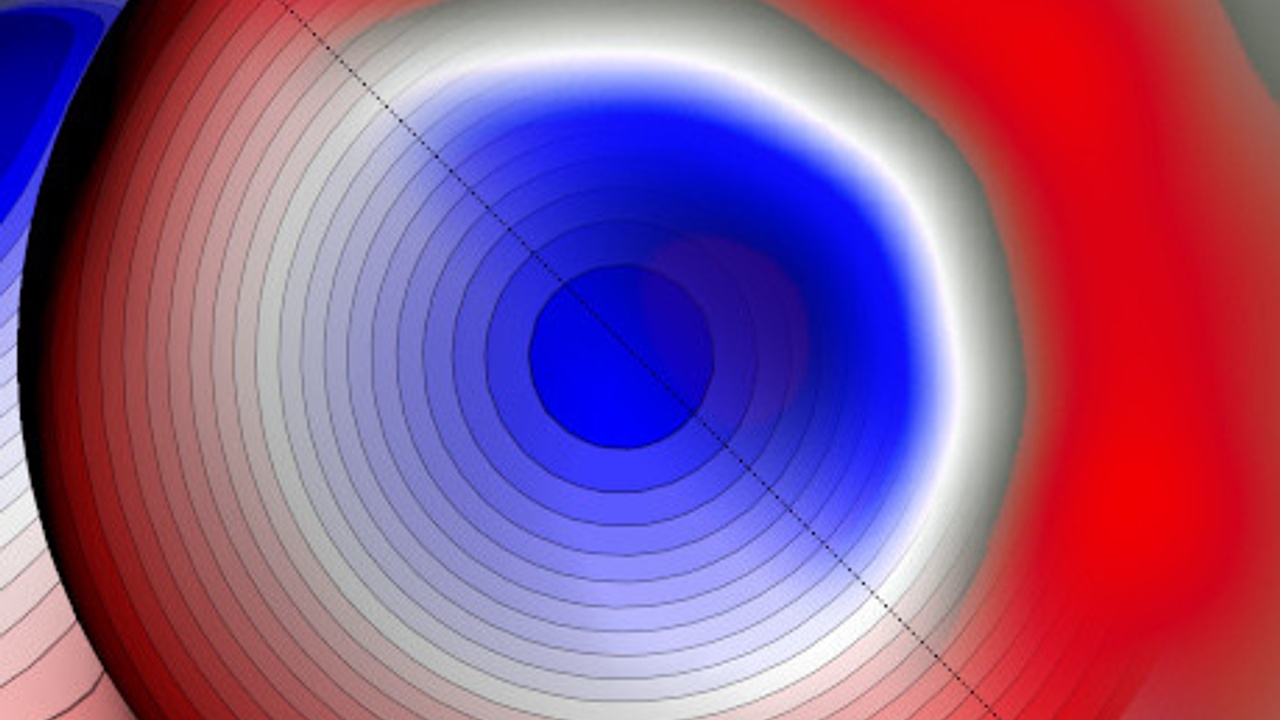 By functionalizing with a single xenon atom the tip probe of a Kelvin force microscope, a group of researchers from the CATRIN of Palacký University in Olomouc, the Institute of Physics of the CAS, the Institute of Organic Chemistry and Biochemistry of the CAS, and the IT4Inovations Supercomputing Center at Technical University of Ostrava have achieved an extraordinary increase in the resolution of atomic scanning microscopy, increasing the sensitivity of the microscopy up to sub-atomic level.

Thanks to this achievement, this group -lead by Pavel Jelínek- was able to capture the real image of the anisotropic (asymmetric) electronic charge distribution -called sigma-hole- on single atoms of halogen compounds. The sigma hole (abbreviated as σ-hole) asymmetric electron density distribution was predicted 30 years ago but never observed before, until now.

This prediction is based on the observation of molecular structures found in different crystals, having unexpected atomic arrangements with two adjacent halogens or a pair of halogen atoms (atoms of group 17 in the periodic table Cl, Br, Fl, ...) and electron donor atoms (O, N, S, ...). Because both halogens and electron donors are electronegative elements (they carry negative charge), one would expect a repulsive force between, but instead we find a bonding (called halogen bond) which stabilizes the molecular crystal structure.

A solution to this puzzle was proposed long time ago, suggesting a formation of a covalent bond between a halogen and a more electronegative atom such as carbon, giving rise to the so called σ-hole, having anisotropic charge distribution on the halogen atom. This peculiar distribution of charge would be composed of a non uniform electrostatic potential around halogen atom exhibiting an electropositive crown surrounded by an electronegative belt, as shown in the image below which illustrates the idea. 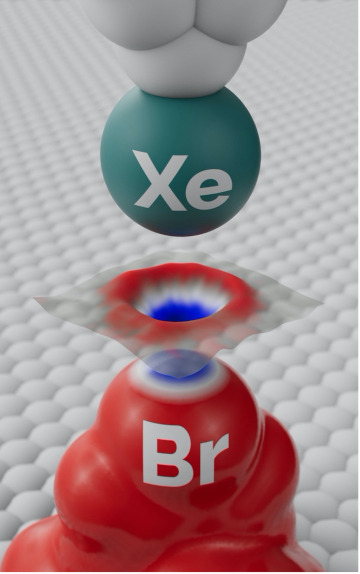 The tip of a scanning electron microscope with a single xenon (Xe) atom -above-, and a map showing the asymmetrical distribution of charge on a halogenated bromine (Br) atom, -below-. The blue crown depicts the positive charge (i.e., the lack of negative charge) at the top of the halogen Br atom surrounded by the negative or electron charge in red. Between both atoms, Xe and Br, we observe an experimental image of a sigma-hole shape, or charge distribution.

The Kelvin probe force microscopy involves suspending a tiny cantilever over a sample and electronically connecting the two so that they form a capacitor. Then, by setting the cantilever to vibrate and record how its frequency of vibration shifts as it is brought close to the sample, the shift is measured over a range of voltages. The resulting distribution of frequency versus voltage, kwon as a “Kelvin parabola” is plotted, and it shows a peak at a particular value which represents the difference between the work function – a macroscopic quantity that tells how much energy is required to remove an electron from a surface – of the cantilever tip and sample.

This single-atom tip Kelvin probe force microscope can map the atomic-scale local variation in charge density by measuring shifts in the parabola’s peak with respect to bias voltage. The theoretical understanding of this technique was deepened to optimize the experiments, thereby enhancing the sensitivity of the electrostatic interaction between probe and sample, and consequently pushing the technique’s resolution beyond the atomic scale!

The following figure, where a comparison between halogen atoms Bromine (Br) and Fluorine (F) is made, may clarify the comprehension of the experiment:

Fig. 1. Schematic view of the atomic microscope measurements to image σ-hole. A-B Models of the molecules samples containing each halogen, Br (4BrPhM) and F (4FPhM), respectively, including their corresponding electrostatic potential map on outermost Br/F atom, which reveal the presence of the σ-hole on Br atom, while there is isotropic negative charge on F atom. C Schematic view of acquisition method of the measurement with a functionalized Xe-tip on 2D grid. D corresponding measreud  shift in frequency with respect to applied voltage Δf(V) acquired in the central part (blue) of the 2D grid and on periphery (red), give parabolas blue and red. Vertical dashed lines indicate the value of Voltage for the given Δf(V) parabola, which forms 2D image. E 3D representation of the microscopy  images (V maps) acquired with Xe-tip over a bromide and fluoride atoms of 4BrPhM and 4FPhM molecules (blue color represents low value of V and red color high value of , respectively). Figure taken from the preprint.

As explains Pavel Jelínek from the Institute of Physics of the Czech Academy of Sciences and CATRIN:

“Confirming the existence of the theoretically predicted sigma-holes is not unlike observing black holes, which had never been seen until only two years ago despite being predicted in 1915 by the general theory of relativity. From this perspective, it’s not much of an exaggeration to say that the imaging of the sigma-hole represents a similar milestone at the atomic level,”

These remarkable results were published in Science.

This achievement is extremely important because electron charge distribution on atoms is fundamental to understand chemical reactions, and to understand the interactions between atoms and molecules. This refined imaging method opens a way to the better comprehension of the material and structural properties of many physical, biological, and chemical systems, as well as the response of this systems to external fields.