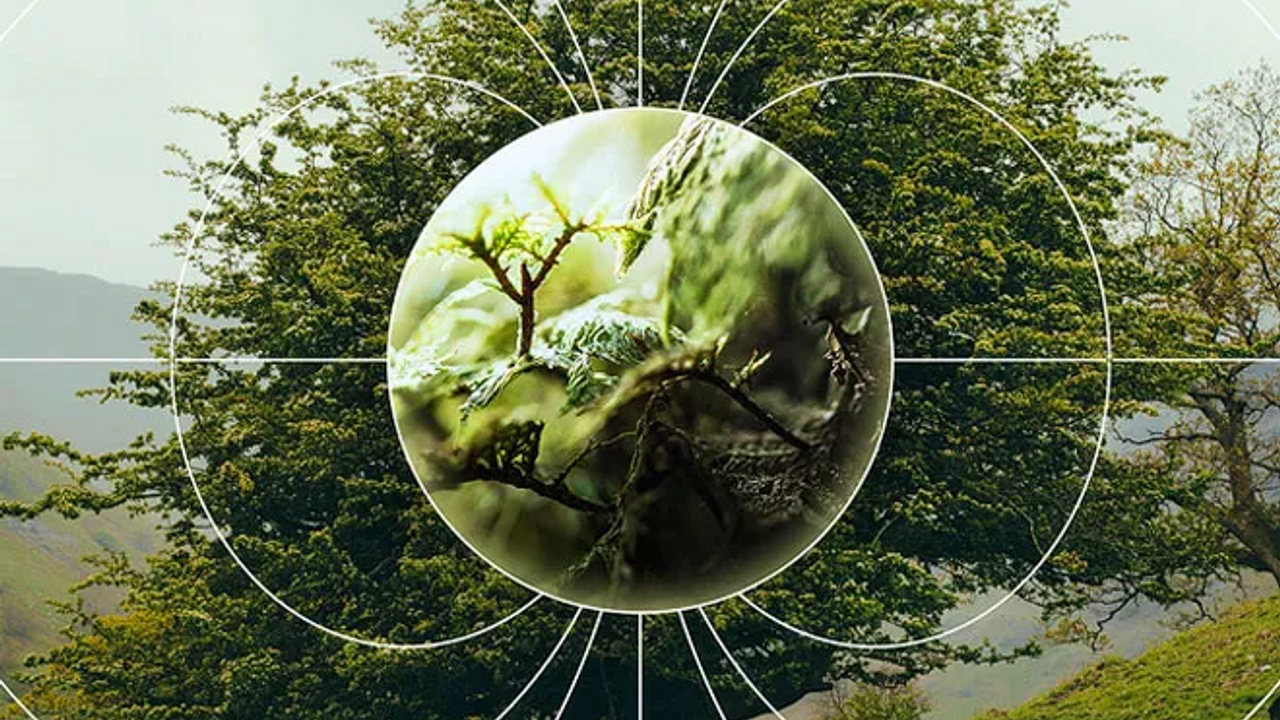 In a former RSF article by biophysicist William Brown and astrophysicist Dr. Amira Val Baker, entitled “The morphogenetic field is real and these scientists show how to use it to understand Nature”, they address the work from Chris Jeynes and Michael Parker, published in Nature 2019, which concludes that there seems to be a field of information-entropy responsible for shaping the micro (DNA strands) up to the cosmological scale (spiral galaxies like the Spira Mirabilis, a double logarithmic spiral). This field of information would give a theoretical support to what biologist Dr. Rupert Sheldrake would call, the morphogenic field!

In the case of the galaxies, Jeynes’ and Parker’s calculations show that the postulation of dark matter (which has not been detected yet) is superfluous, since the entropic force that pushes the galaxy into a double logarithmic geometry—the lowest-energy entropic geometry— is accounting for the additional energy causing the anomalous velocity profiles of galaxies.

“The stars in the galaxy are simply choreographed by an entropic force to line up into a pair of such spirals to maximise entropy.”

Their technique is based on a ground-breaking geometrical understanding of entropy, called Quantitative Geometric Thermodynamics (QGT), a deeply mathematical approach based on fundamental variational calculus considerations through which they have now been able to determine the size of the nuclei in the helium isotopes He, 6He, 8He, assuming only the radius of the proton. 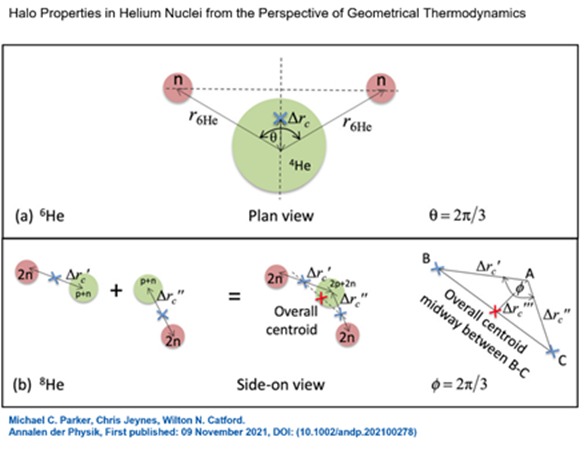 QGT is a systematic formulation of holomorphic info-entropy which has established the Principle of Least Exertion; this is the entropic isomorph of the kinematic Principle of Least Action. The natural consequence is that holomorphic objects maximize entropy (abbreviated as MaxEnt by Jeynes) and therefore, they are necessarily stable, having a most likely geometric configuration. The most likely geometric configuration is the one with lowest energy. Given the proven direct connection between entropy and information, it is clear that entropy is determined by the number of degrees of freedom (abbreviated as DoFs) in the system.

“QGT then tells us the value of the maximum entropy that can be exhibited by the system in its lowest energy state.” [1]

Their technique using the same black hole physics of QGT, which has previously been applied successfully to explain the stability of spiral galaxies and the role of their central supermassive black holes, as well as the stability and configuration of DNA and Buckminsterfullerene (C60 molecule), has now been used to explore the nuclear regime, where authors demonstrate the existence of holomorphic descriptions of 6He and 8He nuclei. The lowest energy of a MaxEnt system such as 6He has the minimum possible number of DoFs, and any excited state would correspond to the utilization of additional DoFs.

A formative force and field is also related to gravity, which is a force that brings together and compacts matter. It is now common knowledge that gravity is a measure of the deformation of space provoked by all the energy-mass contributions located in that region of space. But that does not tell us what spacetime is made of. The idea that gravity can be an emergent property coming from a difference in concentration of information (information density) in the empty space between two masses and its surroundings, was initially proposed by Eric Verlinde, who introduced a theory of entropic gravity in 2009. Verlide extrapolates the idea of gravity as an entropic force, to general relativity and quantum mechanics. It appears that his approach to explaining gravity leads naturally to the correct observed contribution coming from dark energy [2].

Verlinde’s and Jeyne’s approach are promising routes for unification of scales, i.e., unification of quantum mechanics and relativity in a singular framework. Therefore, these theories would emerge from an underlying fundamental frame of work: information theory. In this sense, both proposals are close to the generalized holographic model from Nassim Haramein [3]. Haramein’s generalized holographic approach is a new approach to quantum gravity that is based solely on geometrical considerations, and it is important to understand that this purely geometrical solution works because it encompasses the principles of entropy and thermodynamics.

Stephen Wolfram’s latest work for a theory of everything, which he refers to as the computational universe, is based on similar deductions having to do with degrees of freedom and information theory. All four researchers (Jeynes, Verlinde, Haramein and Wolfram) reach the same conclusion; space at the very fine scale must be discrete instead of continuous as predicted by general relativity. The main feature in which all four proposals differ, is in the units they use to discretize space, and the organization laws governing these units. In the case of Haramein’s approach, the units composing space are called Planck Spherical Units, organized in the surface-to-volume ratio (also known as Haramein’s fundamental holographic ratio φ) of the system. With this approach he computes the charge radius of the proton from first principles, i.e., with no adjusting parameters [3]. His formalism provides other challenging and outstanding consequences, for example, that the strong force that confines protons in a nuclei, is gravity acting at the nuclear scale. Because his units are based on Planck units, and since from 2019 all physical units have been unified in terms of the Planck constant, his theory is now standing in the most solid grounds. Since 2019 all CODATA physical units of length, mass and time  -meters, kilogram, second- are now determined by the Planck constant, which is a fundamental agent, instead of a human convention. This means that the Planck constant is a fundamental aspect of our universe.

In Chris Jeynes and Michael Parker’s work they describe mathematically with Quantitative Geometric Thermodynamics that there is a veritable morphogenic field, based on holomorphic info-entropy generating an effective entropic force through a principle of least exertion. This model is borne out by remarkably precise calculations fitting observational data.  In Jeynes et al. model, structures in the universe have the form and properties they do in part because of a holomorphic info-entropy field, such that information (equivalent to entropy) underlies what Rupert Sheldrake would refer to as formative causation. The Unified Spacememory Network (USN) by Haramein et al. examines the formative causation of the morphogenic field via a parallel information structure to geometric entropy—the entanglement network of multiply-connected spacetime geometry [4]. 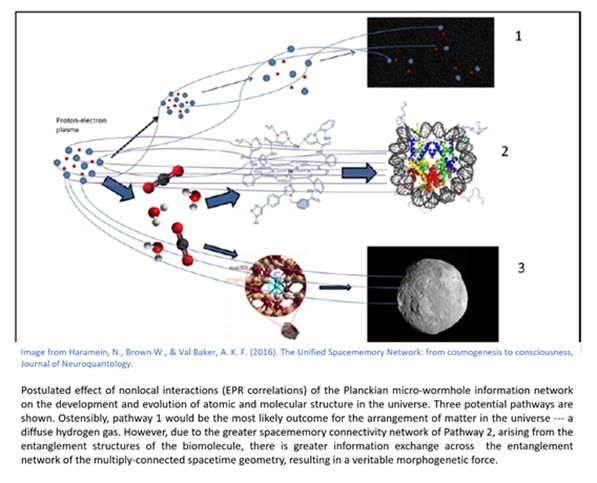 In the USN model it is found that structures and arrangements of matter in the universe that maximize synergetic organization and coherent ordering have an effective driving entropic force due to the increased entanglement network of space, such that greater information is exchanged across the temporal dimension—forward and backward in time- which forms the memory operation of space, and hence the moniker of spacememory. This connectivity network of spacememory drives evolution and development of physical and living systems of the universe to higher orders of synergetic organization, complexity, and functionality.

The complementarity of the four approaches (Jeynes, Verlinde, Haramein and Wolfram) suggests a strong corroborative element to the models, each of which is finding similar solutions from independent yet parallel approaches.

The success of the theory from Parker et al. to be applied uniformly from the micro-molecular to the galactic scale—demonstrating its validity over 35 orders of magnitude—is comparable in achievement to Haramein and Val Baker’s work on the cosmological constant, which demonstrates a unified solution from the Planck scale to the proton, to the Universe [5]. Parker, Jeynes, and Catford’s latest work on calculating the mass and charge radius of the helium atom and its isotopes from first principles—based only on the size of the proton, is very reminiscent of Haramein’s geometric generalized holographic approach and will be a wonderful compliment to his latest paper to be published, entitled “Scale invariant unification of forces, fields and particles in a quantum vacuum plasma”.

It must be noticed that information theory and geometry are deeply related. Geometry encodes information, so we could almost say that geometry is one of the branches of information theory.  Shannon, in 1948, introduced the relationship between entropy and information theory, it follows then, that there must be a geometrical interpretation of entropy. This is why the generalized holographic solution, based on a surface-to-volume ratio which seems to be purely based on geometry, embeds profound entropic notions—which is to say it describes the energetic configurations that are most stable in the universe, like the proton, why they are fundamental, and how such entropic geometric relationships give rise to physical properties—even relating kinematics to entropic qualities.

In Module 7 of the free unified science course offered by Resonance Academy, you could learn about the generalized holographic model in detail.