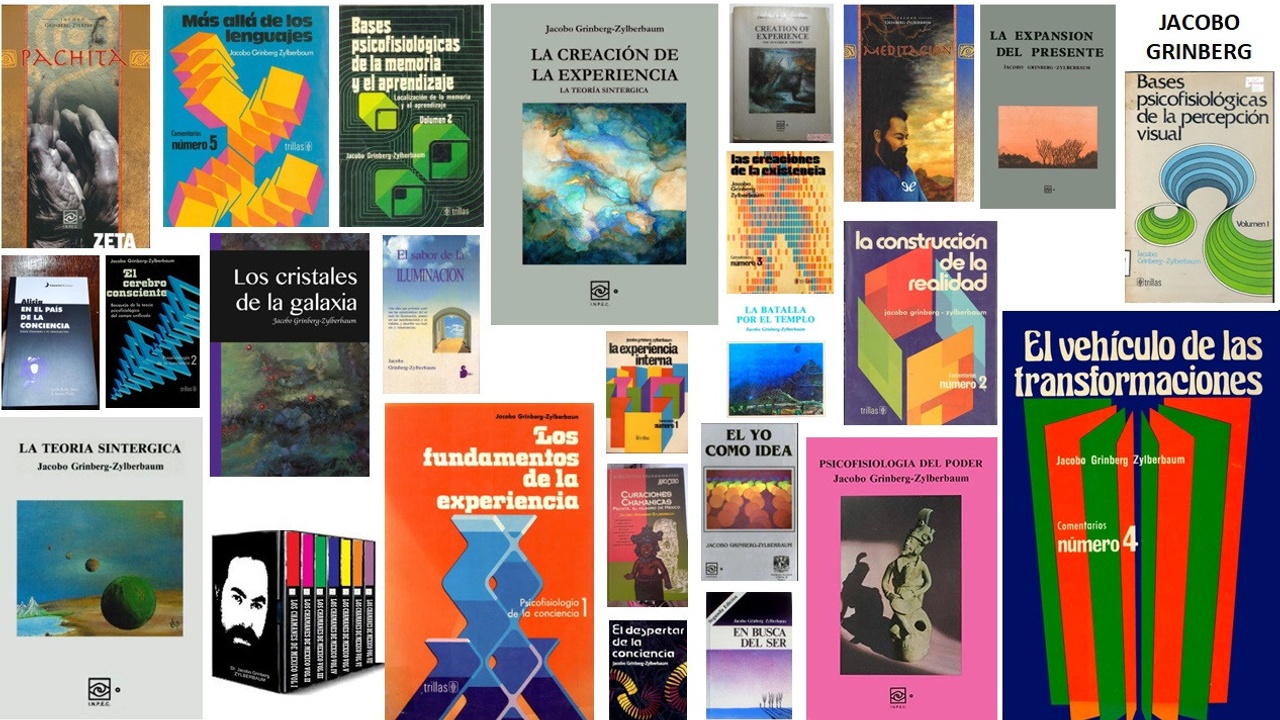 Maybe you have already read or heard about the Mexican neuroscientist Dr. Jacobo Grinberg, who was a pioneer in the study of consciousness. He studied psychology at UNAM (National Autonomous University of Mexico) and then traveled to New York in 1970 to study psychophysiology at the Brain Research Institute, where he obtained a PhD focused on the electrophysiological effects of geometric stimuli on the human brain. Upon his return to Mexico, he founded a psychophysiology laboratory at the Universidad Anahuac. In the late 1970s, he set up another similar laboratory at UNAM, and in 1987, he founded the National Institute for the Study of Consciousness (INPEC), funded by UNAM and the National Council of Science and Technology (Conacyt) [1]. 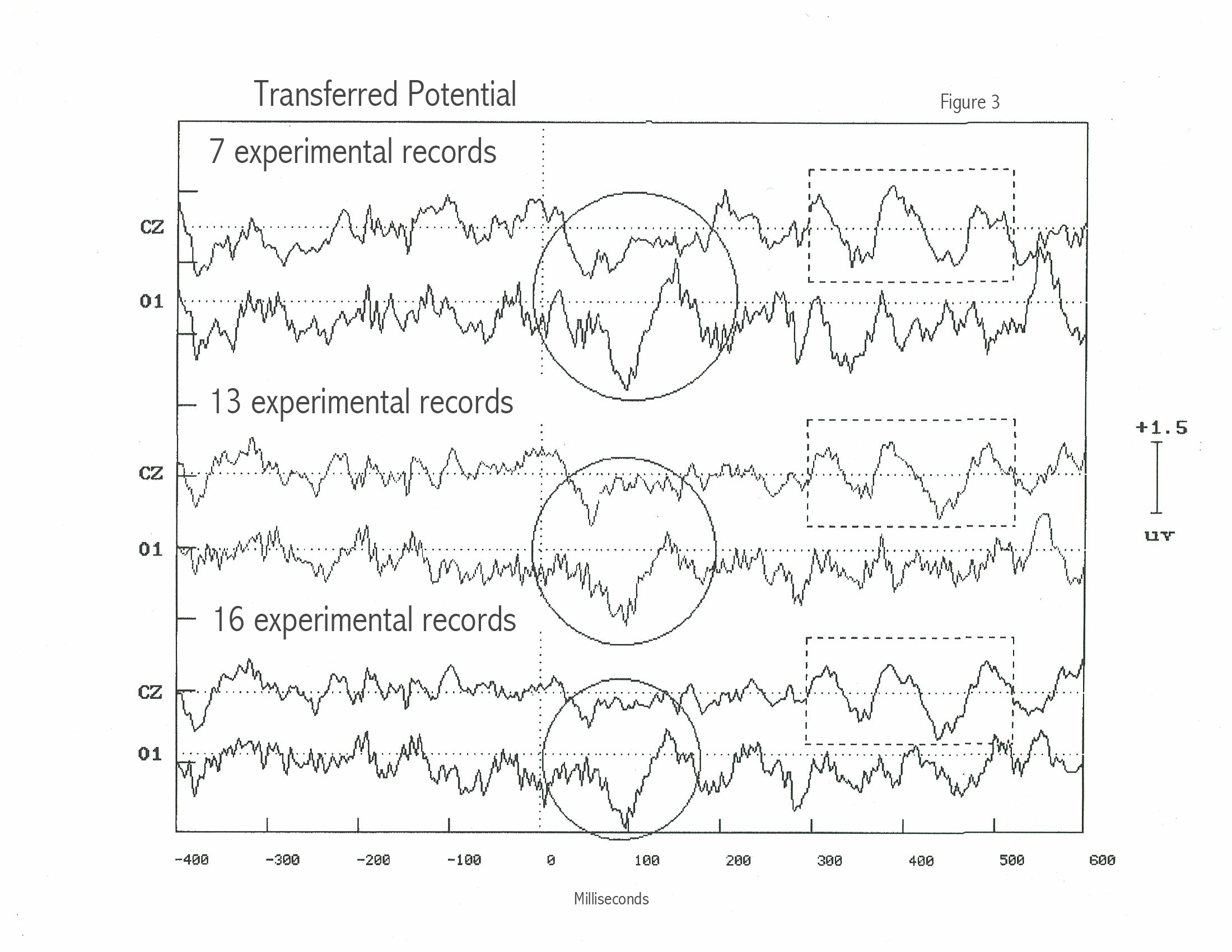 Among other phenomena, Grinberg conducted studies of what he called the “transferred potential” (brain-brain correlations) in his laboratory at UNAM, and he investigated different Mexican shamans, being Barbara Guerrero (Pachita) the most known in Mexico. He developed a theory of consciousness which he named "Syntergic Theory", and wrote more than 50 books (some have been translated to 7 languages), and published papers in peer reviewed journals as well [2-6]. His sudden disappearance in December 1994 remains a mystery, which has been very well described in Ida Cuellar’s documentary “The Secret of Dr. Grinberg”.

The syntergic theory is in close relation with physicist David Bohm’s implicate order theory, which conceives space as a holographic sea of infinite potential from which the phenomena we understand as physical things unfold -the order that is made explicit-. This enfolded holographic matrix conforms the “pre-space” or the Lattice, as Grinberg coins it. The brain interacts with this lattice and from this interaction, the perceptual reality as we know it appears as a final resultant of the cerebral processing; that is, objects, colors, shapes, textures, smells. Reality as we perceive it, is not the stimuli, but the result of extremely fast processes that have already taken place through the interaction. Reality is created as the final product of a brain process, and once created it has a real existence. What we are perceiving through all our senses, is the final product of a brain processing, that once this is there, acquire real existence, but it exists as consciousness, not as matter. This interaction with the brain distorts the field, and the experiencer/experience emerges. The pre-space field or lattice has no quality of experience by itself, until the interaction happens and the lattice distorts.

This pre-space information field or matrix would contain all the information of the whole in each of its parts, therefore, it is holographic in nature, and it is highly complex. The levels of interaction or coupling of the brain with the field would depend on the level of synchronization between both hemispheres of the brain.

“The reality we perceive would be our brain's decoding of what is unmanifest infinite unity, the tip of the wave of the great ocean of consciousness, which we mistake as a "primary stimulus" when it is only like the whirlpool that is excited on the surface of the water -- and therefore we do not realize how we are part of the same creative process of reality” [7].

Therefore, sound, light, mass, energy, and all manifested phenomena would be attributes of consciousness. Through this perspective, Grinberg introduces a notion which is controversial for occidental cultures: that all our experience, all that we can know is nothing but consciousness. We do not know things directly, we know them as phenomena within our consciousness, decoded by our mind. Therefore, in this case, the scientific method of an independent observer analyzing an object externally is not possible: the experimenter is part of the field of his experiment, that which he is investigating is what he is investigating with. Which is why he defines consciousness as "that which is behind every perceptual act, that which sustains the very quality of experience". By this definition, Grinberg coincides with the oriental philosophies which have stated something similar -that reality is a construction of mind- for millennia (Vedas, Sufis, Taoism, Dzochen, and many other traditions based on esoteric knowledge and initiations).

With respect to our capacity to decode the information contained in the pre-space field, Grinberg centers this capacity mainly in the neural field created between our brain and the “pre-space”: during this interaction, the brain can decodify only a portion of the information enfolded in the pre-space, and hence, the result is the reality we perceive, where we distinguish between matter, and empty space. 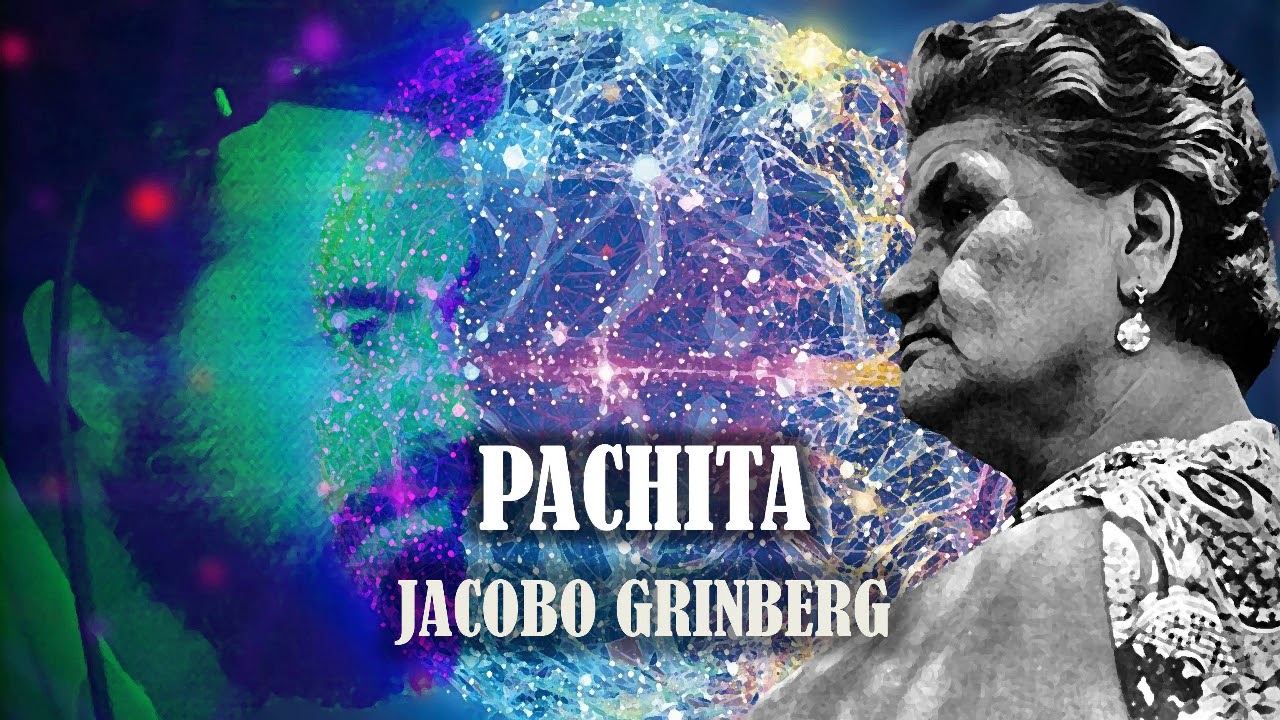 Regarding reality as a combination of matter and empty space, Dr. Grinberg says:

“Space is transparency; it is that which as a container includes, in its different portions, material objects that in our perception are in different locations.

A ball is solid, located in space and differentiated from it by its concrete character. The curious thing, the extraordinarily curious thing about this example, or any other that attempts to describe the difference between transparency and opacity, between the solid and the intangible, is that the content of everything material is precisely that space that we consider different, in foundation and in essence, from matter.

Space contains matter in each of its points. The proof of this is our ability to see; we see space, and that space is what contains the material. When we approach an object and perceive how it increases in size, what we do is to continue seeing space, but now with more content of the object.

My retina sees space, which is where the information about the object is found, it is a small space, barely the size of the area of my retina that transforms space into nerve signals. Therefore, space is only transparent in my construction of the place that separates me from the object; in other words, I normally see the area of space that transects my retina. In this zone is the information that makes me perceive space as transparent, the information about the distance that separates me from the object, and the object itself. It is a zone that repeats itself, that is redundant, and from which I can only transform what really comes into contact with me.

Let's see it with an example: to see a tree, the organization of the spatial information given by the tree must be adequate for the cerebral mechanism in charge of decoding it. If the complexity of this organization exceeds a limit, the image is chaotic or there is no image.

A subject blind from birth due to cataracts who, after surgery, is again able to stimulate his retinal receptors, perceives absolute chaos.

We normally learn to decode organized information and from there we construct our images.”

(Extract from the book: Psycho-physiology of Consciousness) 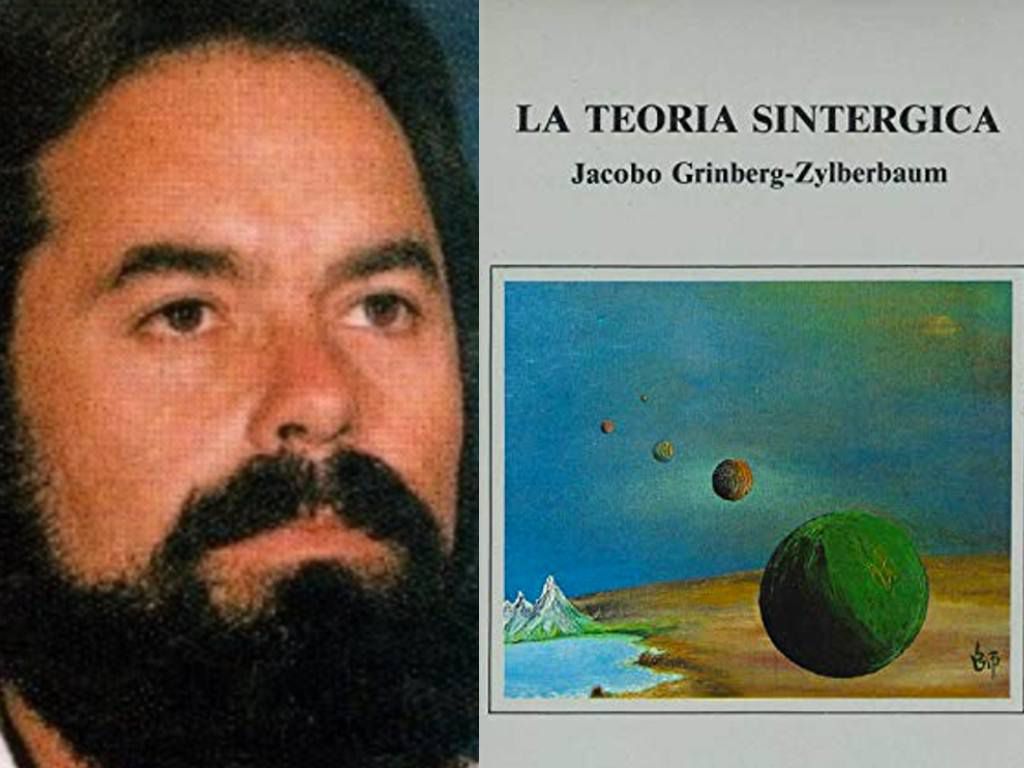 In that same line of reasoning, Grinberg adds:

“If we transpose all these considerations to space and matter, several conclusions would become clearer.

On the one hand, about the transparency of space and the opacity of objects.

We said before that we are unable to perceive and decode simultaneously the whole space, that what we usually do is to handle only the portion that transects our retina, and that this portion is transformed into vision of transparent space and perception of solid objects. The difference between transparency and solidity is no more and no less than the degree of organization.

Transparent space is too complex in its organization to be able to algorithmize it. What we call matter, on the other hand, is less complex and easier to reduce to an algorithm.

If the ease or difficulty of algorithmic reduction is a measure of organization, then a material object, perceived as solid, and a transparent space look like this because, in the portion of space that contains information from both the former (material object) is represented by an organization that we are able to handle, and the latter (transparent space) is represented by an organization so complex that we are unable to decode it.

Already from here we can affirm, with certainty, that the difference between space and matter is a product of brain activity, since space and matter are part of a continuum that differs in organization and complexity.

We see a material object when we encounter those areas of the space-matter continuum that we are able to organize. We see transparent space when we are not able to discover and decode an energetic organization that surpasses our capacity of organization.” 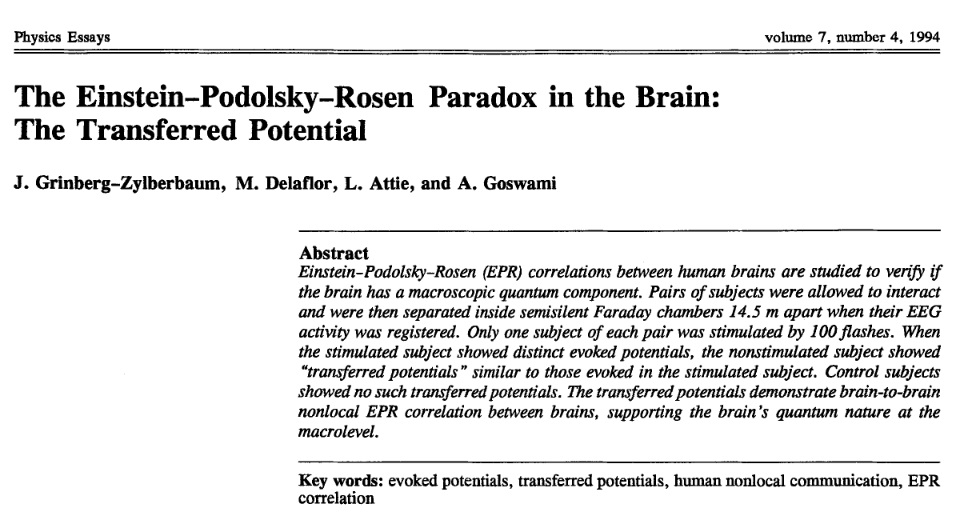 The same year that the seminal paper “The Einstein Podolsky Rosen Paradox in the Brain: The transferred potential” was published (1994) Dr. Grinberg mysteriously disappeared, leaving incomplete many experiments, some of which had in mind using a laser field to probe the interaction between the brain and the lattice.

In view of all these evidences, we realize how Grinberg was far ahead of his time. Fortunately, his work and research are an inspiring legacy … the foundations of a new paradigm in science!

It is a great synchronicity that Grinberg’s work starts to gain popularity in Mexico and abroad, now that Nassim Haramein’s generalized holographic model is about to achieve the complete unification of forces, fields, and particles, through his unified field theory based on a complete description of the structure and dynamics of the quantum vacuum plasma [8].  Such unification addressed not only the holographic nature of the vacuum plasma, but its fractal nature as well.

There are outstanding similarities between The Generalized holofractographic model (GHM), and Jacobo Grinberg’s syntergic theory. We could say that, in fact, Haramein’s theory bridges Grinberg’s and Bohm’s theory.  In collaboration with Stanford University neuropsychologist Karl H. Pribram (1919), Bohm had developed the holonomic model of brain functioning; a model of cognition that proposes that the functioning of the human brain is similar to that of a hologram.

The GHM offers a plausible explanation for the origin of entanglement, the phenomena that could be at the root of the experimental results that Grinberg and many others after him have achieved, having to do with non-local effects in space and time, revealing a deep connection between the brain and the quantum vacuum plasma.

The fractoholographic field is also related to Rupert Sheldrake’s morphogenic field, and its morphic resonance.

One of the most critical objections against entanglement being the source of non-locality in biological systems, is because entanglement and other quantum effects (such as tunneling and quantum superposition) are supposed to disappear at room temperature.  Nevertheless, a very recent study has proven that quantum effects may pervade even at ambient conditions.

Such growing piece of evidence is progressively showing that the Universe very probably is not a machine, but a living organism. Theories like Panpsychism -the idea that consciousness is integral to the cosmos at the most fundamental level- are gaining credibility as they are becoming more and more plausible.

We would like to stress out the fact that during the past 25 years, science has advanced further, and we now find neurons in the heart and intestines, reason why the neural network building our sensorial experience is much more complex than just the brain.