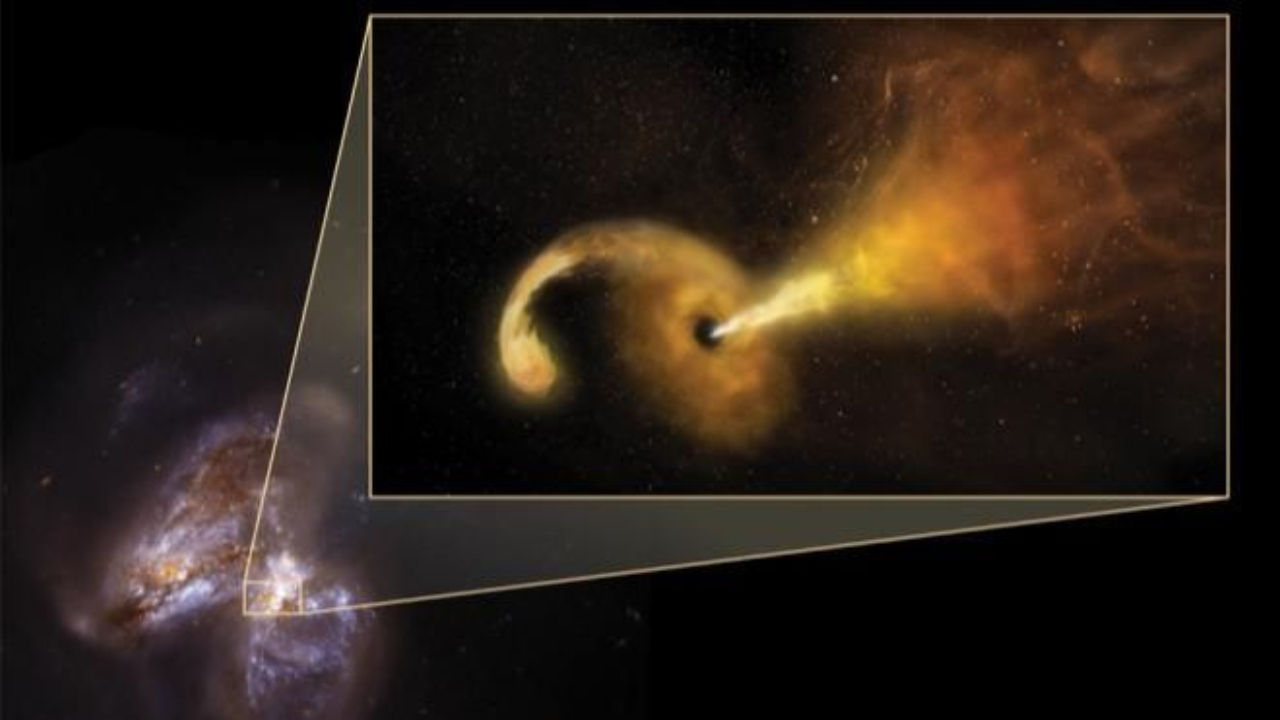 A black hole by its own intrinsic nature has an extremely strong gravitational attraction and the intensity of which is primarily decided by mass as well as the nature of the astrophysical object that was crushed to form the respective black hole. In other words, the gravitational pull of a black hole is directly proportional to mass. Although the initial formation of a black hole results in a fixed mass, which principally depends on the mass of a star during its end stage, it continually grows in size by devouring stellar systems and other astrophysical objects floating in its vicinity.

Moreover, considering the black hole area theorem propounded by Hawking, the overall area of a black hole can never decrease so considering the classical scenario wherein it merges with another black hole, the area would always increase as the two black holes would form a single unified astrophysical entity [1, 2]. This is another way to signify the growth of black holes.

Now in a recent set of events named AT2022dsb, astronomers handling the Hubble space telescope have observed an area of gas surrounding a black hole situated in the galaxy ESO 583-G004 which is roughly about 300 million light-years away from Hubble’s location in space. Spectroscopic data suggests that this area of gas essentially resembles a torus and is the relic of a star that had been devoured by the black hole. These gaseous remnants of the star would ultimately collapse into the black hole and become part of its physical content.

Due to the phenomenal distance between Hubble and the detected star, the exact determination of the properties is difficult but thanks to Hubble’s ultraviolet sensitivity technique, the researchers were able to estimate the spectroscopy of the shredded star and ascertain its elemental composition. 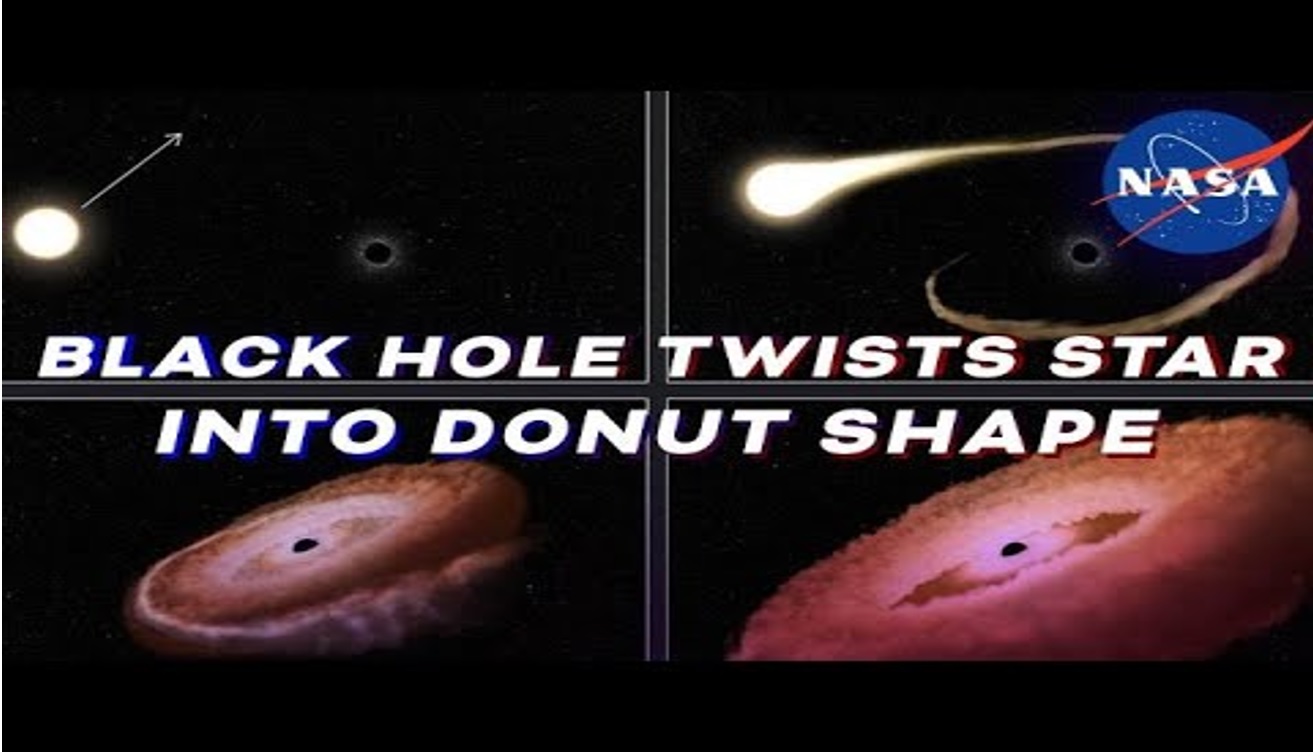 Technically, an event wherein a stellar system approaches close enough to a supermassive black hole so as to get devoured by it and initiate the process of spaghettification is called a tidal disruption event (TDE). The latest observation is also an example of TDE, a phenomenon first theorized by the likes of Brandon Carter and others in the early 80s.

One can also not ignore the fact that radiation comes out of the black hole in the form of jets from the accretion disk, throwing enormous amounts of matter into the intervening space. However, the gravitational pull balances this out to a great extent thus the black hole system remains in equilibrium.

Accretion disk of a black hole is essentially known for rotating stellar material inside as well as spewing jets of matter into the interstellar medium. Uniquely, in the latest observation it was seen that radiation is accumulated around the disk of the black hole in such a way that it assumes a doughnut-like or torus shape. Figure below gives a rough sketch (in stages) of a black hole swirling and eating up contents of a nearby stellar system. 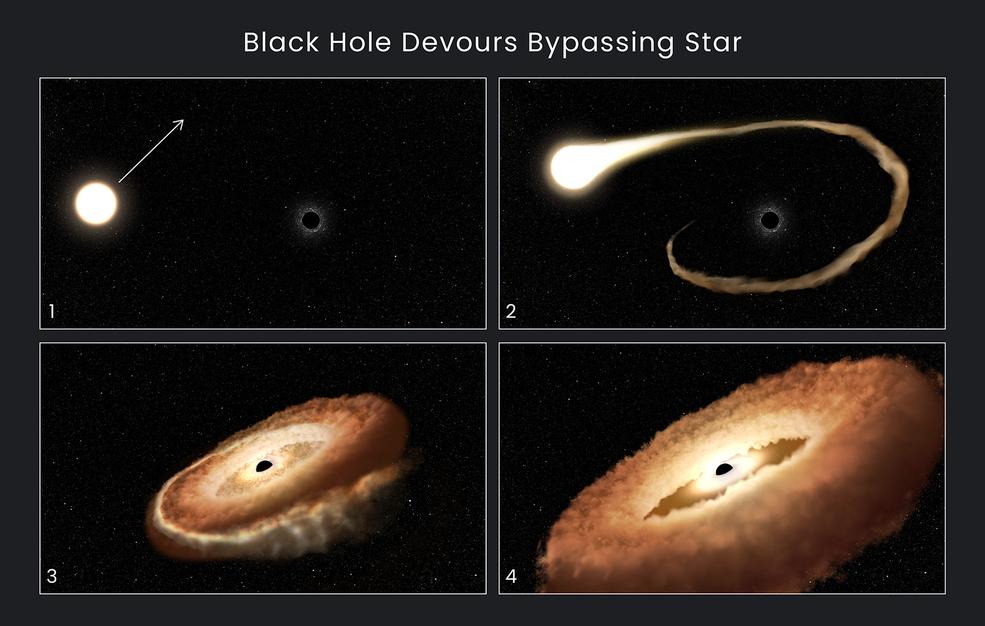 The latest results were presented at the 241st American Astronomical Society (AAS) meeting held in Seattle, Washington. More details of the work can be found in NASA’s post on their official website.

The work of mathematical physicists Roger Penrose and Stephen Hawking has successfully established that black holes are a robust prediction of Einstein’s general theory of relativity. The domain of black hole physics forms an appealing aspect of physicist Nassim Haramein’s work as well. Interestingly, he discovered a new solution to Einstein’s general relativity by incorporating the dynamics of spin (torque and Coriolis forces) into the field equations [3]. In his model, space-time is itself curling at all the scales and this curling is the source of spin from the microscopic to the cosmological scales, the reason why all black holes would rotate according to his theory. Furthermore, his holofractographic model also suggests that the structure of a black hole is more like a torus, allowing information to collapse and expand from the central singularity.

Now in view of the latest observations from the Hubble telescope, it is explicit that the data further supports and gives a lot of weight to Nassim’s insights on black holes. In fact, according to Nassim’s theories, the dynamics of black holes replicate a dual torus structure and the recent observations can perhaps be integrated coherently with this proposal.

Moreover, a coherent formulation of the available data on black hole accretion, TDEs, and the dual torus model could reveal many exciting and unprecedented facets of black hole physics. This unified perspective as part of the generalized holographic model can in turn resolve problems about black holes that currently are nothing less than a tragedy for standard cosmological models.

[3] Haramein, N., and Rauscher, E. A. (2005). The origin of spin: A consideration of torque and Coriolis forces in Einstein’s field equations and grand unification theory. Beyond The Standard Model: Searching for Unity in Physics, 1, 153-168.