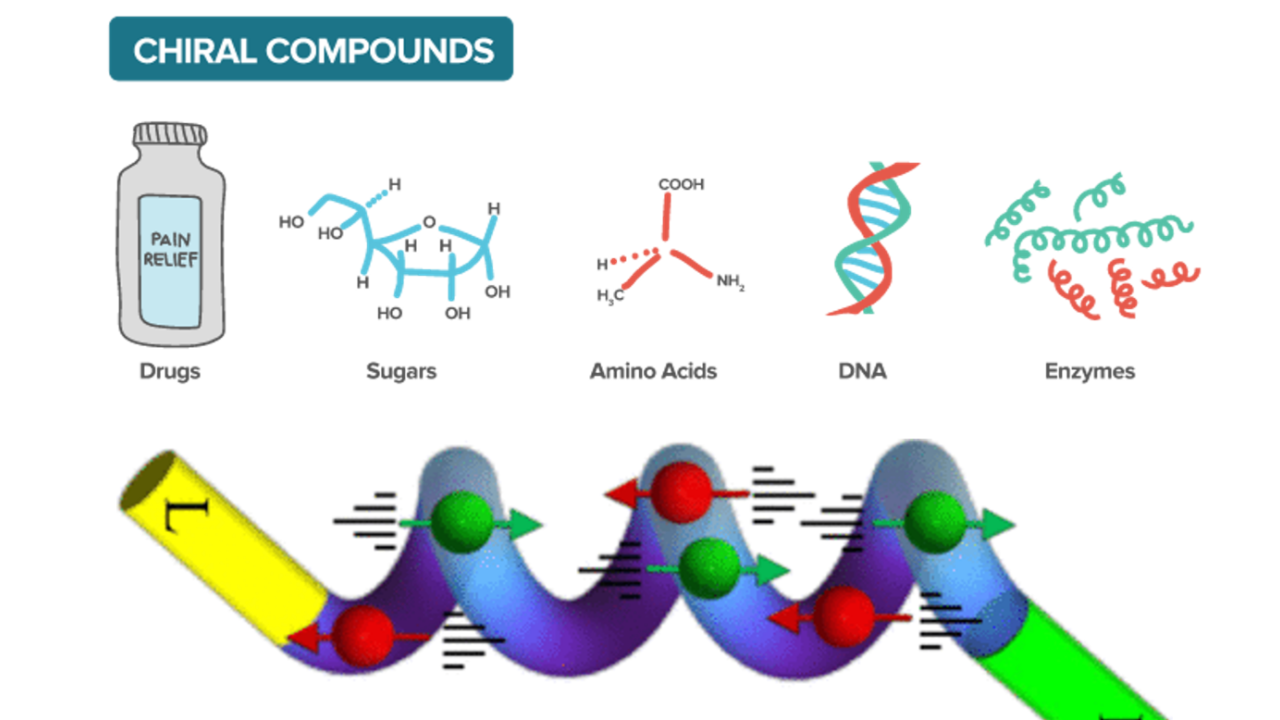 Experiments directly on tunneling ionization dynamics have discovered that electrons will behave differently when quantum tunneling from a molecule depending on the molecule's chirality (chirality refers to the “handedness” of non-superimposable stereoisomers of a molecule, the same way a left hand cannot be superimposed over a right hand, even though they are mirror images of each other). The projection of electron spin onto its momentum direction, called spin-orbit coupling, strongly affects the tunneling probability between chiral molecules of the biological system. This phenomenon of electron conduction being enhanced by an electron’s spin orientation is known as chiral-induced spin selectivity (CISS). Previous studies had shown that the helical geometry found in many biomolecules, like DNA and alpha helices of proteins, induces robust spin filtering accompanied by, and intimately related to, strongly enhanced transmission, and now new research investigating electron tunneling dynamics at the attosecond-scale have discovered that the likelihood that an electron will undergo tunneling, the phase at which the electron wave-packet tunnels out and the timing of the tunneling event depend on the chirality of the molecule. These exciting results lay the groundwork for additional studies that will use the unique symmetry properties of chiral molecules to investigate the fastest processes occurring in light-matter interaction and may explain the origin and reason for “handedness” or specific chirality that characterizes the biological system.

Chemists and molecular biologists utilize the phrase “handedness” to describe molecules that are characterized by a particular type of asymmetry: being either “left-handed” or “right-handed”. As these descriptors would indicate, your hands are a great example of the property of chirality. If you look at your two hands, palms up, you can see that they are mirror images of one another. But if you try to superimpose one over the other, keeping them in the palms up orientation and placing one over the other, you will see they do not overlap or match completely. This is chirality, your hands are like stereoisomer enantiomers of each other— mirror images of each other that are non-superimposable— and such objects, containing “handedness”, can be found at all scales in nature, from galaxies down to molecules. 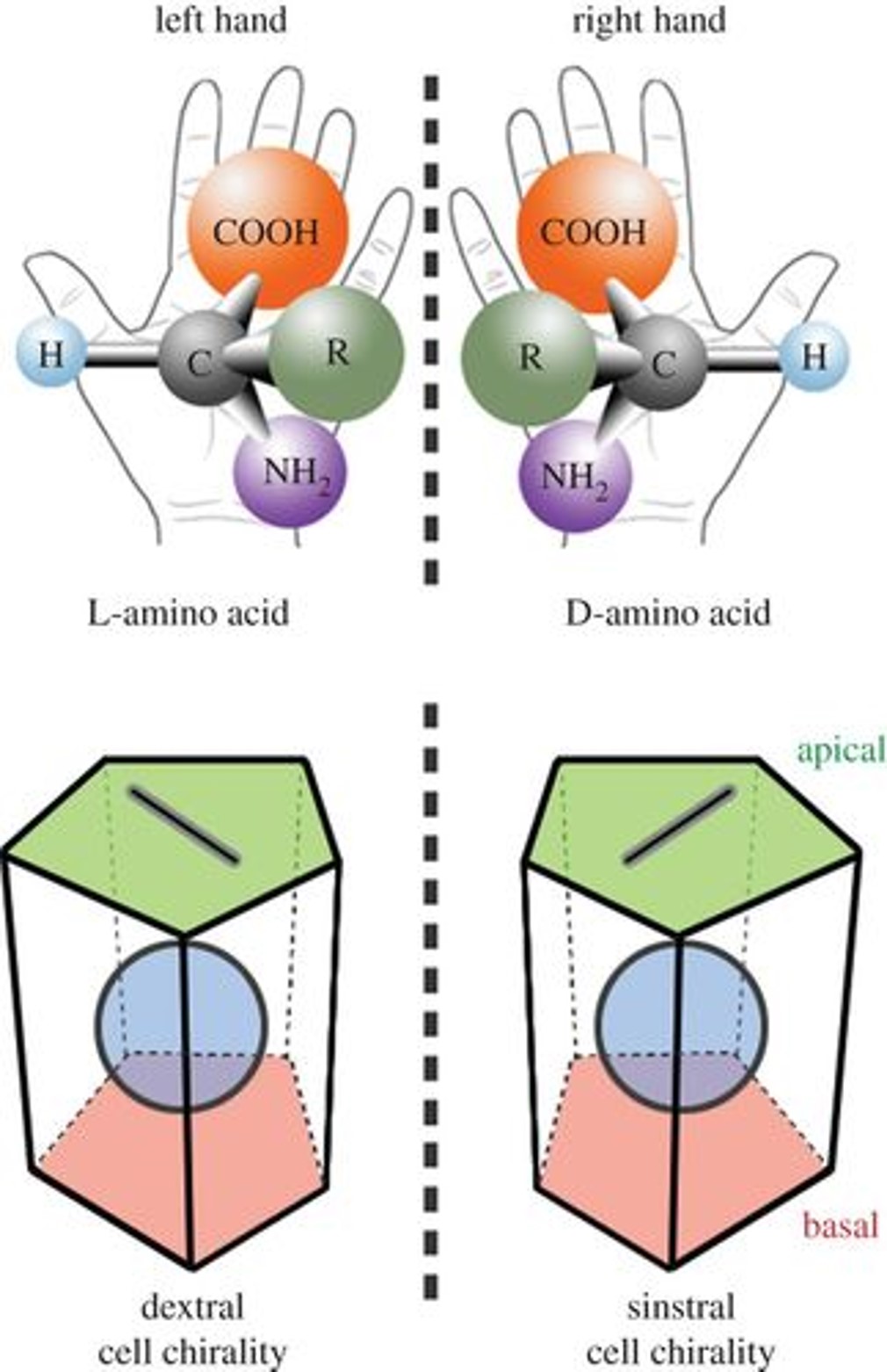 “Handedness” in the universe plays a role in everything from parity-violations of the weak force— subatomic particles involved in the weak nuclear force, which causes nuclear decay, are always magnetically oriented in the opposite direction from the one they move in, so that they spiral like the threads of a left-handed screw, whereas the mirror-image particles, the ones like right-handed screws, don’t feel the weak force— and recent studies have even found an asymmetry between “left-“ and “right-handed” galaxies. Such asymmetries, or parity violations between mirror configurations are even thought to underlie the apparent difference in abundance of matter over antimatter. Chirality is occurring in nature across scale, and it is being found that the handedness can affect the behavior of these mirror configurations of systems.

At a more quotidian level, we experience chirality every day, not only when we grab an object or put on our shoes (because of our anatomical chirality) but also when we eat or breathe as our taste and smell receptors will react differently to two mirror images of a chiral molecule. And it is not just taste, smell, or nerve conduction— many molecules that come into our body will behave differently depending on their chirality. For example, where normally L-amino acids and D-nucleic acids make up polypeptides and DNA, right-handed amino acids and left-handed nucleic acids will function as signaling molecules but will not be recognized at all for proteins or DNA code. The significance of handedness is so far-reaching that a molecule in one orientation can be a cure, while its mirror stereoisomer is a poison. Chirality is thus crucial in pharmacology, where 90 percent of synthesized drugs are chiral compounds. And as we will see here, chiral molecules have symmetry properties that make them prime candidates for the investigation of fundamental phenomena in physics. 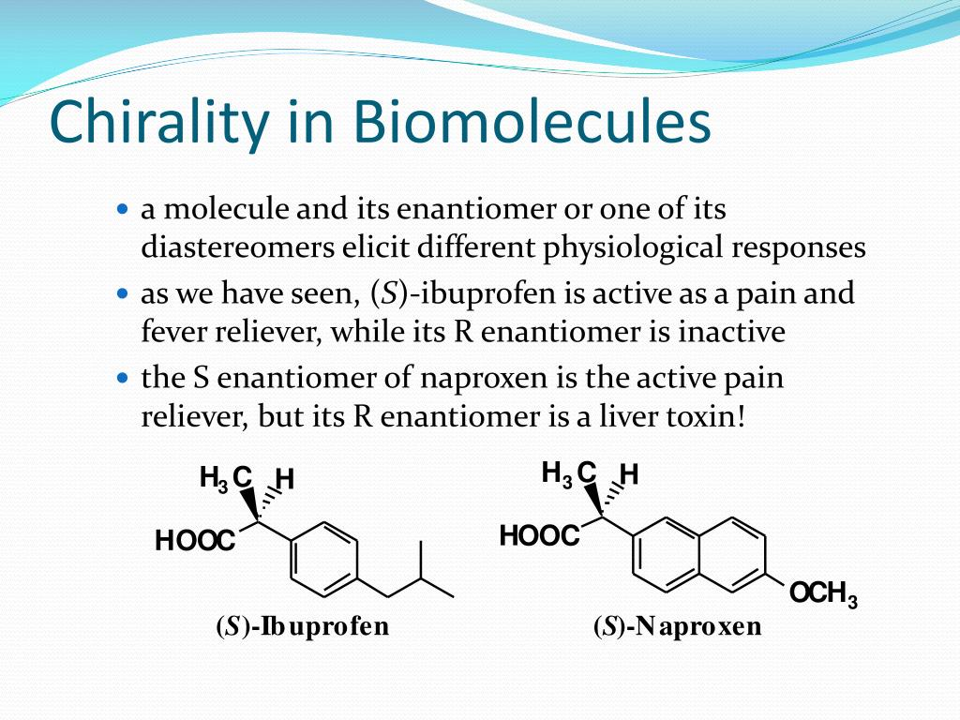 Electron Spin and Conduction in the Biological System

The functionality of many biological systems depends on reliable electron transfer with minimal heating: if the robust coherent electron transport occurring between biomolecules generated heat it would quickly lead to cell death, as temperature changes of a few degrees cause denaturation—an irreversible structural deformation of proteins. As such, the biological system transports electrons with near 100% efficiency, with no energy loss to heat dissipation. How is this accomplished within the biological system, where many biomolecules are insulators and where there are conventionally dissipative forces like strong molecular vibrations? Unlike man-made electric circuits, nature realizes electron transport via quantum tunneling between insulating chiral molecules, and studies have begun to reveal many mechanisms involved in chiral-induced spin selectivity.

For example, one study has found that CISS is enhanced in the many helical molecules found throughout the biological system, like DNA and the alpha helices of proteins [1]. Experiments have revealed that transport through such helix-shaped molecules strongly depend on the electron’s spin. Theoretical attempts to explain this effect rely on large spin-orbit coupling, which is uncommon in organic materials. IT has been shown that the helical geometry of many biomolecules induces correlations between the spin of the transferred electrons and their flow direction. In the tunneling regime, these connections can explain the large spin polarization measured in experiments over an energy range of hundreds of meV, as well as the enhanced transmission through chiral molecules. The directionality generated by the locking of the electron spin and momentum may hold the key to understanding the extremely low dissipation of electric transfer through organic molecules despite strong molecular vibrations.

Aside from answering some of the most intriguing questions in biology, such as the origin and reason for specific “handedness”— where primarily only left-handed amino acids and only right-handed nucleic acids are utilized— this has significant implications for technological application, like spintronic computing and nanotechnologies. One of the main challenges in developing nano-scale electronic devices is minimizing heating. In silicon-based computer chips, dissipation is the primary obstacle to keeping up with Moore’s law. It is apparent that reverse engineering the biological system’s ability to do this may hold the key, as we have seen that electron transport via quantum tunneling, which is currently being explored as a route to reduce heating in semiconductor devices, has long been implemented in nature.

Interestingly, while the living system has been harnessing electron spin for robust near 100% efficient conduction through insulating chiral biomolecules for billions of years, physicists within the conventional paradigm of the Standard Model are still debating whether electrons really spin at all. A conventional physicist will tell you that although electrons have a property called “spin”, they do not physically spin. However, if this were the case, then there would not be experiments showing the importance of spin-orbit coupling, molecular chirality, and helicity in electron conduction within biomolecules. Indeed, considerations like these have led physicists to begin to posit that electrons must really, physically spin. Chris Sebens, an assistant professor of philosophy at Caltech, has resolved many of the issues associated with electron spin by positing that they are more field-like than particle-like [2]— the same solution that physicists Nassim Haramein has elucidated as a solution to the electron mass [3].

Chris Sebens has used his solutions to solve many of the problems with modeling the electron as a point-like particle (with no spin), such as the gyromagnetic ratio, self-repulsion, and infinite bare charge problems [4]. And while fundamental questions regarding the nature of the electron are still being resolved, other highly salient behaviors are being further characterized, such as the influence of electron spin and molecular chirality on tunneling dynamics. To further understand the interaction and coupling of electron spin with polarized fields and chiral molecules—important to understanding CISS electron ballistic conduction in the biological system— a recent study has investigated the relationship of spin orientation of an electron and the “handedness” of chiral molecules to determine if quantum tunneling behavior is altered.

Using attosecond-scale resolution of tunneling dynamics research teams led by Prof. Yann Mairesse from CNRS / Bordeaux University and Prof. Nirit Dudovich of the Weizmann Institute's Department of Physics of Complex Systems have found that electrons do behave differently when quantum tunneling through chiral molecules or polarized light field, finding that chiral light-matter interactions do in fact induce subtle angular-dependent shaping of both the amplitude and the phase of tunneling electron wave packets [5].

Tunneling is a phenomenon in which quantum particles cross seemingly impossible-to-cross physical or energetic barriers. Since this motion is forbidden in classical mechanics, it is very difficult to establish an intuitive picture of its dynamics (see our RSF original articles on ER=EPR to understand what is physically occurring during quantum tunneling). To create a tunnel in chiral molecules, the researchers exposed them to an intense laser field. One of the lead researchers explained that "the electrons of the molecules are naturally bound around the nuclei by an energy barrier”, and “you can imagine the electrons as air trapped inside an inflatable balloon. The strong laser fields have the ability to reduce the thickness of the balloon enough for some air to tunnel through it, even though there's no hole in the balloon."

Mairesse, Dudovich, and their teams set out to study the connection between chirality and tunneling, an as-of-yet-unexplored aspect of the tunneling process. The team investigated the way in which the brief encounter when a chiral molecule meets a chiral light field affects electron tunneling. Since it only takes a few hundred attoseconds for an electron to escape at atom or molecules, the team used ultra-precise “attoclock technique” utilizing laser field measurements to characterize the tunneling behavior.

This is very much like the effect of a corkscrew, but at the nanometer and attosecond scales— another demonstration of the importance of helicity in biomolecules and their associated electron conduction and spin-orbit coupling properties. The researcher teams have therefore discovered that the likelihood that an electron wave packet will undergo tunneling depends on the chirality of the molecule, suggesting that the strong presence of chirality in the biological system is an adaptive response to facilitate and enhance electron tunneling for ballistic electron conduction with little-to-no energy dissipation and excess heat generation.