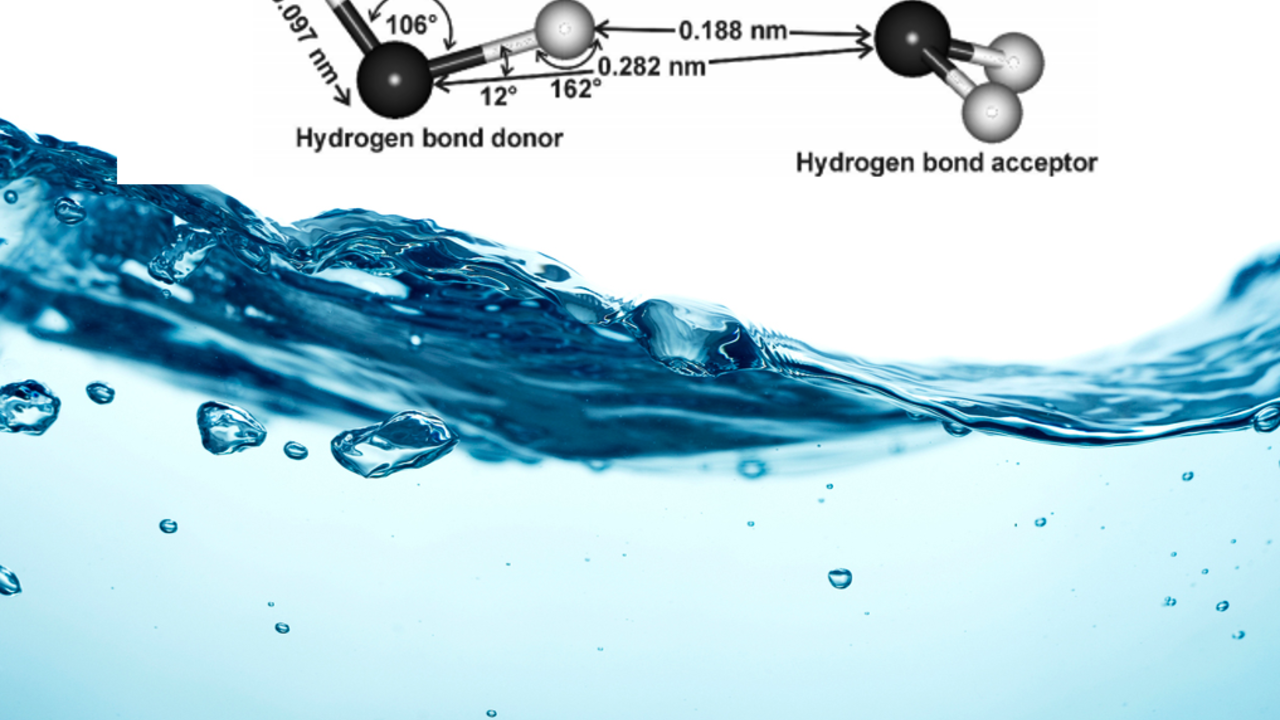 The source of many of water's remarkable attributes is due to its molecular geometry -- the partial electric dipole formed by its two hydrogen moieties and one oxygen atom. Such that the oxygen atom is slightly electro-negative at one pole, and the covalently bonded hydrogen atoms are slightly positively charged at the other pole. This causes water to form tetrahedral-oriented weak bonds with adjacent water molecules. It is for this reason that water molecules are strongly attracted to each other, meaning that it takes a good amount of energy to get them to separate, such as in evaporation or the increased distance associated with freezing.

This weak bonding between hydrogen atoms and electro-negative elements is called hydrogen bonding, which gives water its amazing qualities but is also involved in many other molecular interactions -- such as holding DNA strands together to form the double helix, coordinating protein folding to enable nearly every function of the cell, and causing stable membranes to form due to hydrophobic--hydrophilic interactions. It is such an important interaction that if the strength of hydrogen bonding were even slightly different in water then life as we know it would not be possible.

This places hydrogen bond strength, particularly of water, in the "fine-tuning category" with several other constants and force interactions of nature that, if they were to be even slightly different from their given values, would prohibit the formation of a universe with even nominal degrees of complexity.

All considered, the exact strength of hydrogen bonding is an important value to know. Which is why the latest news of the precise and direct quantitative measurement of hydrogen bond strength by atomic force microscopy is so exciting. With this technique, scientists can now directly measure the strength of hydrogen bonds as well as image hydrogen atoms, something that was previously only inferred given that hydrogen is the smallest element and its position in a molecule is difficult to determine using standard techniques.

"With just a single electron and a single proton, hydrogen is the smallest atom, yet its generation in the early stages of the universe makes it the most abundant element, constituting 75% of all baryonic mass. The extremely high reactivity of hydrogen means it easily forms covalent compounds with nearly all nonmetallic elements, famously, oxygen and carbon. Hence, identifying and understanding the role of such a ubiquitous element have long been key scientific challenges. In particular, hydrocarbons are one of the most varied and functionalized products at the heart of engineering, chemistry, and life, and hydrogen is often critical in their function." -- precise and direct quantitative measurement of hydrogen bond strength by atomic force microscopy