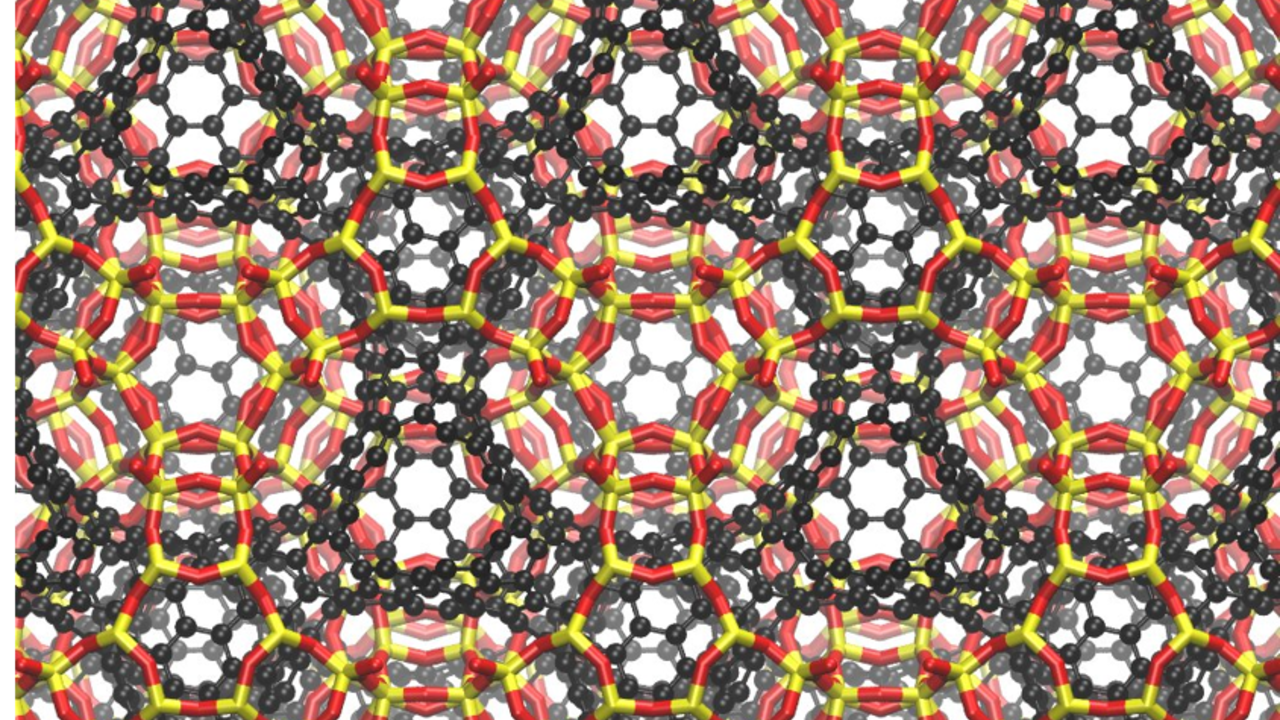 The discovery of buckyballs surprised and delighted chemists in the 1980s, nanotubes jazzed physicists in the 1990s, and graphene charged up materials scientists in the 2000s, but one nanoscale carbon structure – a negatively curved surface called a schwarzite – has eluded everyone. Until now.

UC Berkeley chemists have proved that three carbon structures recently created by scientists in South Korea and Japan are in fact the long-sought schwarzites, which researchers predict will have unique electrical and storage properties like those now being discovered in buckminsterfullerenes (buckyballs or fullerenes for short), nanotubes and graphene.

The new structures were built inside the pores of zeolites, crystalline forms of silicon dioxide – sand – more commonly used as water softeners in laundry detergents and to catalytically crack petroleum into gasoline. Called zeolite-templated carbons (ZTC), the structures were being investigated for possible interesting properties, though the creators were unaware of their identity as schwarzites, which theoretical chemists have worked on for decades.

Based on this theoretical work, chemists predict that schwarzites will have unique electronic, magnetic and optical properties that would make them useful as supercapacitors, battery electrodes and catalysts, and with large internal spaces ideal for gas storage and separation.

UC Berkeley postdoctoral fellow Efrem Braun and his colleagues identified these ZTC materials as schwarzites based of their negative curvature, and developed a way to predict which zeolites can be used to make schwarzites and which can’t.

“We now have the recipe for how to make these structures, which is important because, if we can make them, we can explore their behavior, which we are working hard to do now,” said Berend Smit, an adjunct professor of chemical and biomolecular engineering at UC Berkeley and an expert on porous materials such as zeolites and metal-organic frameworks.

Smit, the paper’s corresponding author, Braun and their colleagues in Switzerland, China, Germany, Italy and Russia will report their discovery this week in the journal Proceedings of the National Academy of Sciences. Smit is also a faculty scientist at Lawrence Berkeley National Laboratory.

Diamond and graphite are well-known three-dimensional crystalline arrangements of pure carbon, but carbon atoms can also form two-dimensional “crystals” — hexagonal arrangements patterned like chicken wire. Graphene is one such arrangement: a flat sheet of carbon atoms that is not only the strongest material on Earth, but also has a high electrical conductivity that makes it a promising component of electronic devices. 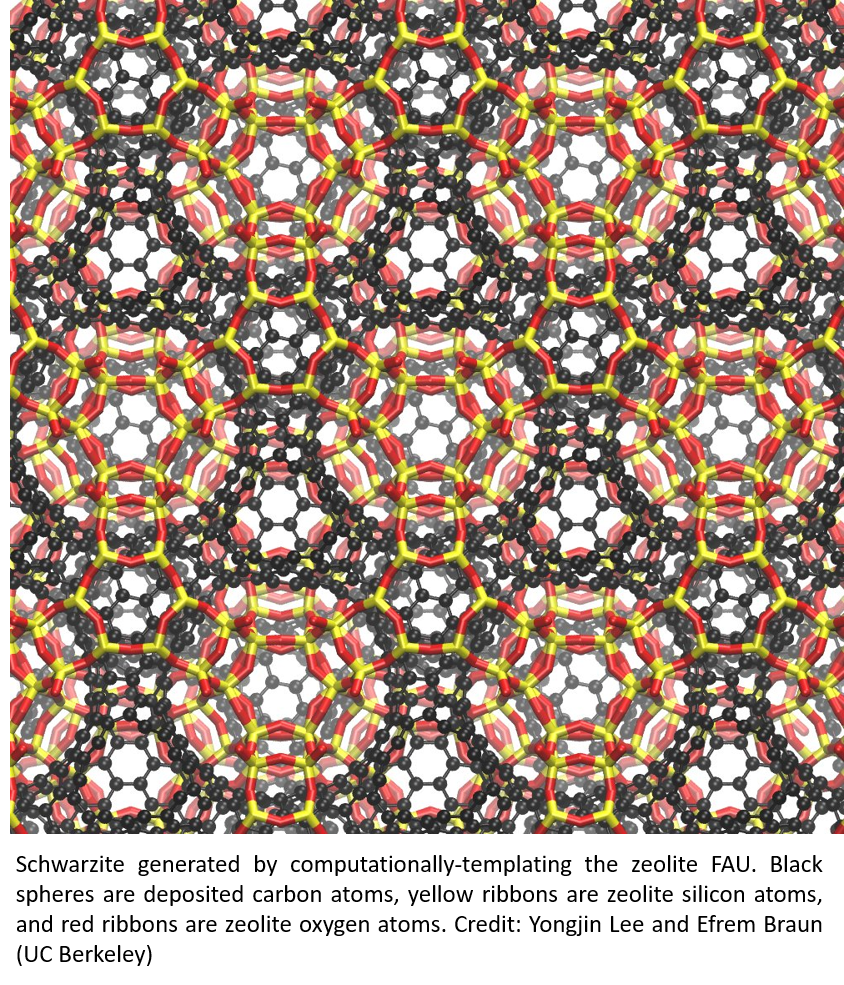 Graphene sheets can be wadded up to form soccer ball-shaped fullerenes – spherical carbon cages that can store molecules and are being used today to deliver drugs and genes into the body. Rolling graphene into a cylinder yields fullerenes called nanotubes, which are being explored today as highly conductive wires in electronics and storage vessels for gases like hydrogen and carbon dioxide. All of these are submicroscopic, 10,000 times smaller than the width of a human hair.

To date, however, only positively curved fullerenes and graphene, which has zero curvature, have been synthesized, feats rewarded by Nobel Prizes in 1996 and 2010, respectively.

Like soap bubbles on wire frames, schwarzites are topologically minimal surfaces. When made inside a zeolite, a vapor of carbon-containing molecules is injected, allowing the carbon to assemble into a two-dimensional graphene-like sheet lining the walls of the pores in the zeolite. The surface is stretched tautly to minimize its area, which makes all the surfaces curve negatively, like a saddle. The zeolite is then dissolved, leaving behind the schwarzite. 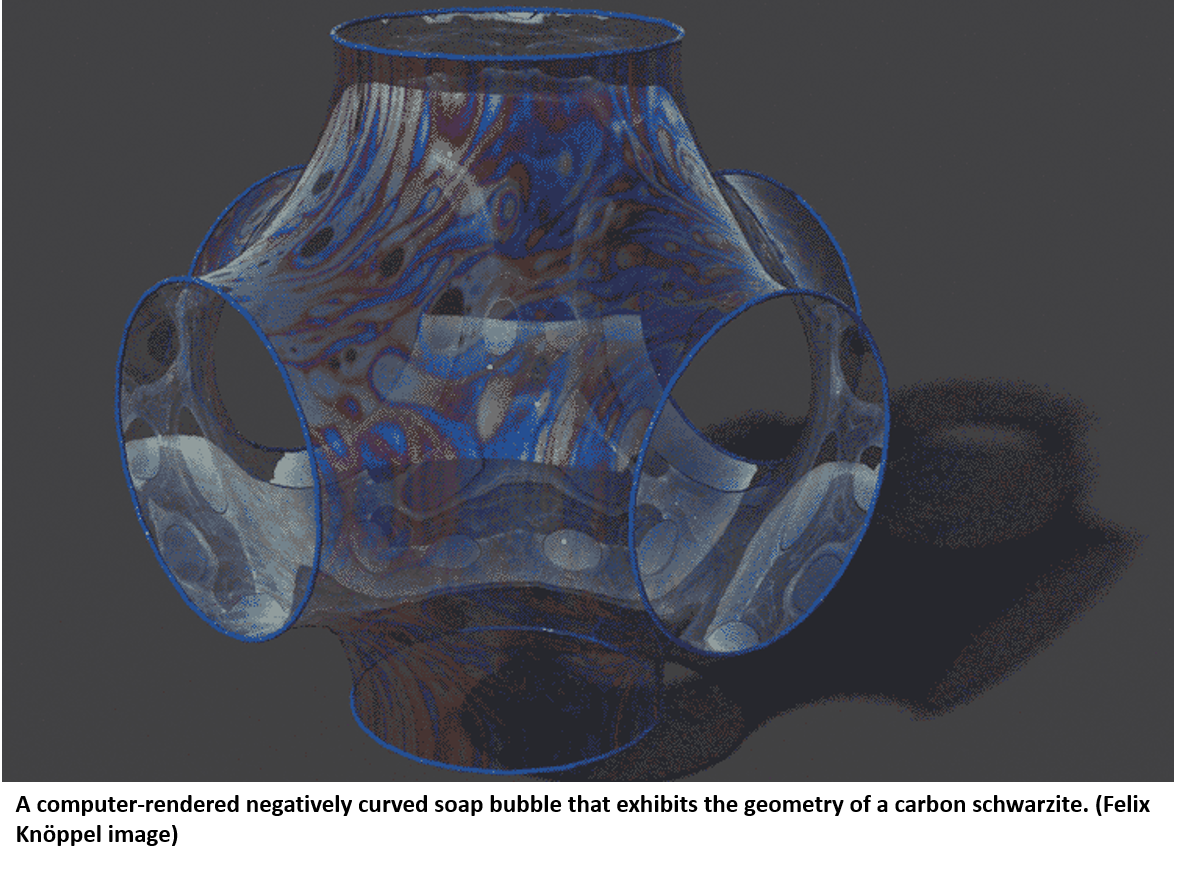 “These negatively-curved carbons have been very hard to synthesize on their own, but it turns out that you can grow the carbon film catalytically at the surface of a zeolite,” Braun said. “But the schwarzites synthesized to date have been made by choosing zeolite templates through trial and error. We provide very simple instructions you can follow to rationally make schwarzites and we show that, by choosing the right zeolite, you can tune schwarzites to optimize the properties you want.”

Researchers should be able to pack unusually large amounts of electrical charge into schwarzites, which would make them better capacitors than conventional ones used today in electronics. Their large interior volume would also allow storage of atoms and molecules, which is also being explored with fullerenes and nanotubes. And their large surface area, equivalent to the surface areas of the zeolites they’re grown in, could make them as versatile as zeolites for catalyzing reactions in the petroleum and natural gas industries.

The three-dimensional cage structure of a schwarzite that was formed inside the pores of a zeolite. (Graphics by Yongjin Lee and Efrem Braun)

Braun modeled ZTC structures computationally using the known structures of zeolites, and worked with topological mathematician Senja Barthel of the École Polytechnique Fédérale de Lausanne in Sion, Switzerland, to determine which of the minimal surfaces the structures resembled.

The team determined that, of the approximately 200 zeolites created to date, only 15 can be used as a template to make schwarzites, and only three of them have been used to date to produce schwarzite ZTCs. Over a million zeolite structures have been predicted, however, so there could be many more possible schwarzite carbon structures made using the zeolite-templating method.