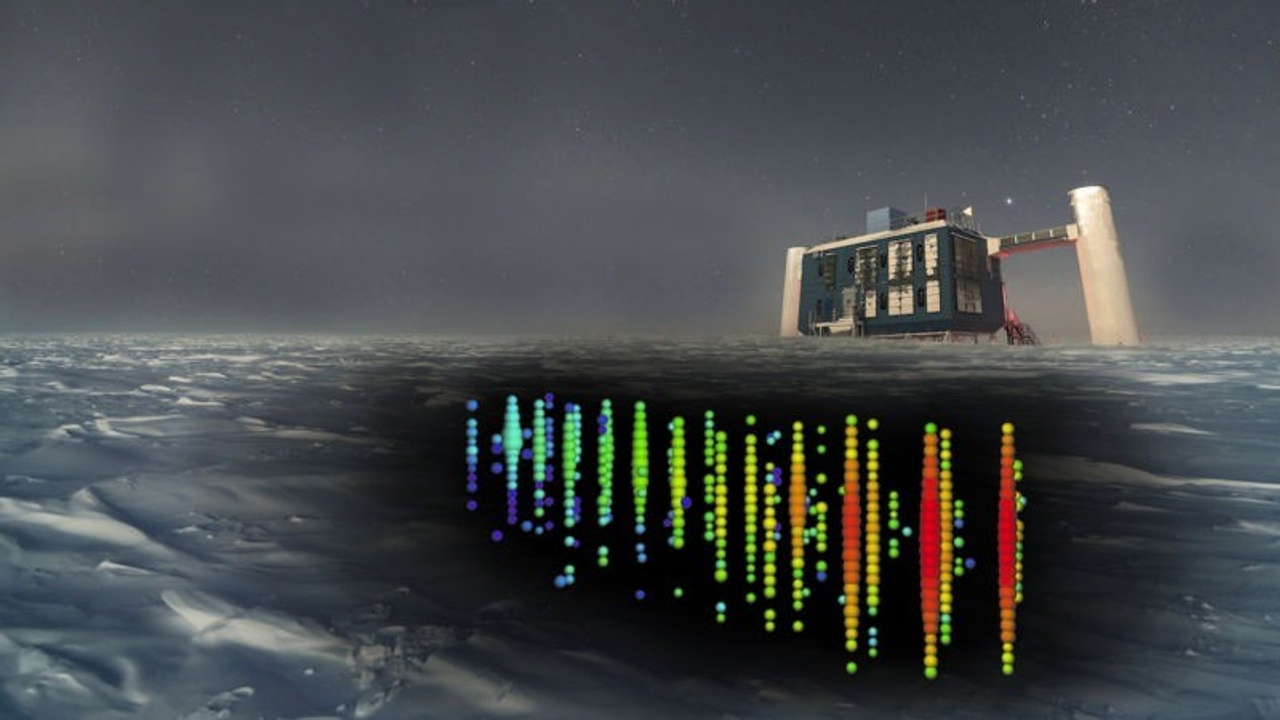 Neutrinos are subatomic fundamental particles, that are produced through radioactive decay – that is the spontaneous decomposition of a nucleus into a more stable configuration. These high energy particles are also weakly interacting at the electromagnetic level and are thus able to traverse vast distances across space and time, carrying information from the most distant parts of the Universe. On the other hand, the highly energetic enigmatic particles such as protons, electrons or atomic nuclei – known as cosmic rays – are highly interactive and are often times deflected from a straight path. This makes it difficult to determine the exact path and thus its source. However, as they typically decay into neutrinos, specifically a neutrino with an energy on the order of peta-electron volts (PeV) – that’s 1000 trillion electron volts, the detection of such would imply the prior existence of a particle with even more energy – one of those enigmatic cosmic rays!

That is exactly what happened at the the IceCube Neutrino Observatory which is specifically designed to pick up tiny emissions sparked by rare interactions between neutrinos and water-ice molecules.

When a neutrino interacts with the Antarctic ice it creates other particles which travel through the ice faster than light (that’s not faster than the speed of light – just faster than light travels through the ice) which emits light – known as Cherenkov light. The detector consists of over 5000 photo-multiplier tubes suspended on strings within a cubic-kilometer of Antarctic ice buried beneath the surface and extending to a depth of over 8000 feet. As the sensors detect this Cherenkov light, a pattern emerges over time which reveals the direction and magnitude of the neutrinos. Similar to the LIGO observatory, when a neutrino is detected the IceCube observatory sends out an alert to all other observatories with the approximate source location – the observatories can then quickly do follow up observations across the various frequency bands, from low-energy radio waves to high-energy gamma-rays.

So last September, when neutrino 170922A arrived, a multitude of ground and space observatories responded and traced the neutrinos origin to a supermassive black hole in a special type of active galaxy which blasts out jets of light and particles in the direction of Earth – known as a blazar. The observation of blazar TXS 0506+056, located 4 billion light-years from Earth, marks the first instance of “multimessenger” astronomy.

This type of unified approach to research has huge implications as, now not only are astronomers revealing a picture of our Universe from multiple frequencies of electromagnetic radiation and gravitational waves but also from energetic particles.