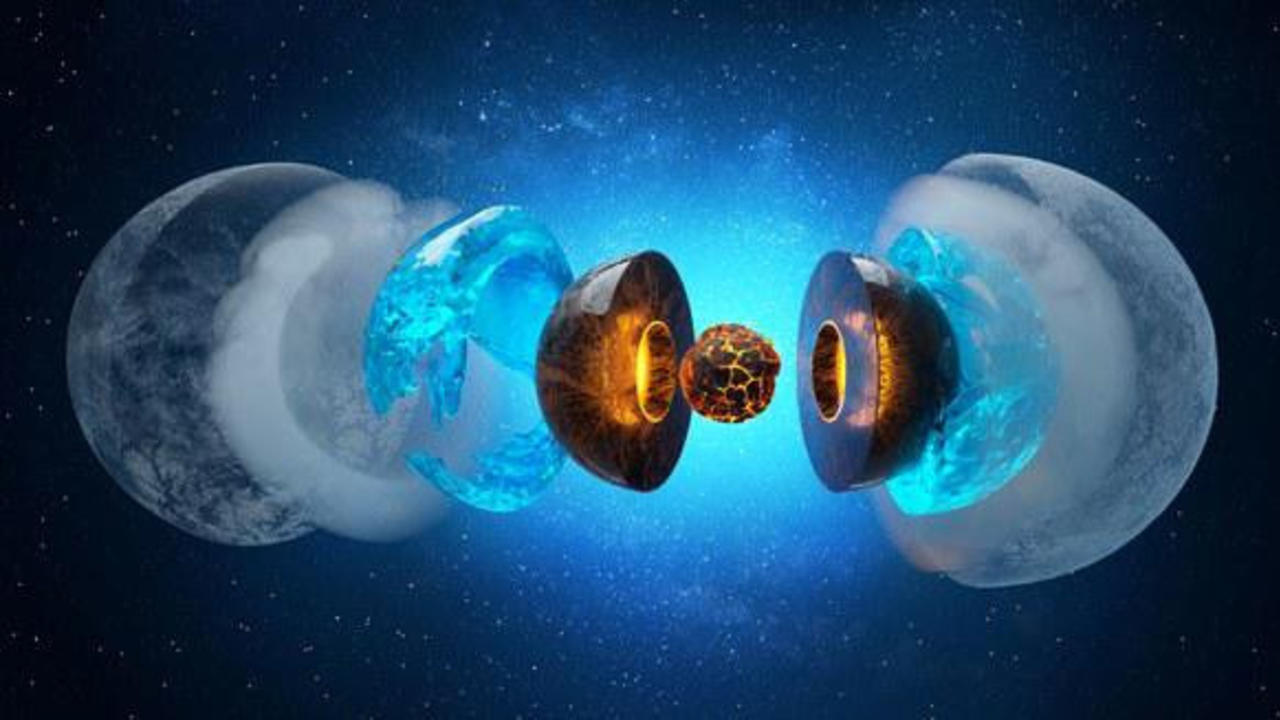 We are familiarized with the four states of matter acknowledged so far: solid, liquid, gas and plasma. Who would have imagined a fifth state of matter, containing simultaneously two states? Within the diversity of crystallization forms or phases of water from liquid to solid ice (more than seventeen crystalline and several amorphous ice structure), appeared a new one: ionic oxygen crystal with ionic hydrogen (mainly protons) moving inside, like a fluid. It has been named ice XVIII, and it is both a new phase of water (because it depends on applied temperature and pressure) and a new state of matter (because it gathers both a solid and a fluid).

Crystals are formed by ionized atoms, such that the electrostatic forces between cations and ions keep the lattice solid. The common salt crystal has anions of Chlorine (Cl-) and cations of Sodium (Na+), is in solid state at room temperature, but the superionic crystal of water synthesized recently requires extremely high pressure and temperature to form, as it first has to ionize its atoms -breaking the water molecules-. In all other crystallization forms of ice water, the molecules remain; the ice forms precisely because of cold temperatures that freeze the system. But in this superionic experiments, high temperature (above 2000 kelvin) brakes the water molecules, and high pressure (above 100 gigapascals) densifies the system.

One wonders what natural scenario could host such an extravagancy. Apparently, a perfect scenario for it can be found in Ice Giants like Uranus and Neptune, which are composed mainly by Ice water (at least 65%). As a matter of fact, superionic ice at extreme pressure and temperature is relevant as an explanation for their core, where such extreme conditions are expected. Their cores must have a particularity, given the exotic magnetic fields emanating from of these Ice Giants, compared to the remaining planets of the solar systems that have a magnetic field pretty much aligned with the axe of rotation and with a simpler shape suggesting a conductive fluid region in the core that swirls, allowing the emanation of massive magnetic fields.

“This suggested superionic ice would conduct electricity, like a metal, with the hydrogens playing the usual role of electrons. Unlike the familiar ice found in your freezer or at the north pole, superionic ice is black and hot. A cube of it would weigh four times as much as a normal one.” https://www.quantamagazine.org/black-hot-superionic-ice-may-be-natures-most-common-form-of-water-20190508/

On the other hand, we have been used to understanding conductivity of elementary charged particles such as electrons that compose the electronic current. Who would have guessed a current of protons -which are not considered to be elementary particles because of their additional internal structure-? Though this exotic behavior of water was expected from numerical simulations more than thirty years ago, the fact of observing it for the first time is breathtaking, especially when considering the amount of approximations involved in the model since the complexity of the system prevented exact quantum chemical calculations.

The authors of this work published in Nature (https://www.nature.com/articles/s41586-019-1114-6) resume in their abstract the experience: “Particularly intriguing is the prediction that H2O becomes superionic6–with liquid-like protons diffusing through the solid lattice of oxygen— when subjected to extreme pressures and high temperatures. Numerical simulations suggest that the characteristic diffusion of the protons through the empty sites of the oxygen solid lattice (1) gives rise to a surprisingly high ionic conductivity above 100 Siemens per centimetre, that is, almost as high as typical metallic (electronic) conductivity, (2) greatly increases the ice melting temperature to several thousand kelvin, and (3) favours new ice structures with a close-packed oxygen lattice.“

This discovery, gathering a diversity of topics, addressed simultaneously all scales, from the atomic to the cosmological, connected in a single thread just as the unified theory proposed by Nassim Haramein.